When startups go looking for executive talent, they want someone with some experience working for a successful organization. When it comes to the cloud, there is a dearth of expertise — with one notable exception — Salesforce. Perhaps, that’s why Salesforce, by far the most successful pure SaaS company ever, has become a pipeline for executive talent.

The company launched in 1999 and has grown over 17 years to more than 24,000 employees, over 6000 of which work in the Bay area, making it the largest tech employer in San Francisco. With that many employees, it would make sense that some would venture out on their own and start their own companies, or be recruited to help run startups — and that has clearly been the case over the years.

The fact is that former Salesforce employees are spread across the Silicon Valley ecosystem and beyond. Whether we are talking about Zuora co-founder and CEO, Tien Tzuo or Okta CEO and co-founder, Todd McKinnon, both of whom got their start at Salesforce, there are countless examples of former Salesforce employees heading out into the world and bringing the skills they learned running the world’s biggest SaaS company to bear on other other organizations.

When you bring in good talent, chances are at some point, some will want to spread out and try their hand at other companies, says Tim McAdam, general partner at TCV, who sits on the board of FinancialForce, a company built on top of the Salesforce platform. “Salesforce has attracted great people over time, but great people are ambitious and they want to take their learnings and start a business or join a newer business,” McAdam explained. 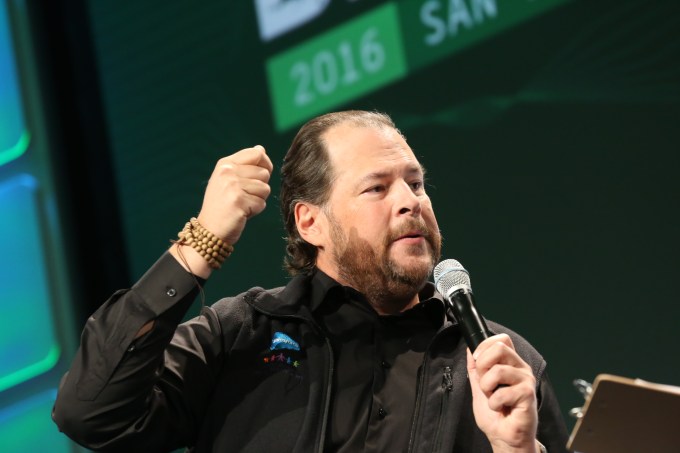 He adds, Salesforce is extremely goal-oriented and hits their numbers, and those are the kinds of skills that translate well at other organizations. As though to prove his point, the company killed it in its latest earnings report earlier this month, generating $2.14 billion in revenue, up from $1.71 billion for the same period last year. What’s more, Salesforce reported it’s well on its way to a $10 billion revenue goal it set for itself, and it even went so far to set a $20 billion revenue goal for some time in the next three-four years.

You just don’t see that ability to execute at that level from other SaaS vendors, at least not yet, and McAdam says that it starts at the top with CEO and Chairman Marc Benioff. “The inculcation of execution from Benioff trickles down and allows executives to be entrepreneurial and to do great things over time,” he said.

Go your own way

Zuora’s Tien Tzuo was Salesforce’s first CMO when the company was so new it was being run out of Marc Benioff’s apartment. He says, what they built, and Benioff was a driving force, was a great environment for building, marketing and delivering software. “We rewrote the rules,” he said. When he was ready to go start his own company managing subscription businesses in the cloud in 2007, Benioff encouraged and supported him. Over the last nine years, Zuora has raised over $242 million and has achieved a unicorn valuation of $1.12 billion.

The biggest impact was working at Salesforce during the critical emergence of the cloud. It really informed my view of the problem I was solving. Todd McKinnon, CEO at Okta

Todd McKinnon from Okta says that working at Salesforce between 2003 and 2009 gave him a front row seat as companies started their shift to the cloud. “The biggest impact was working at Salesforce during the critical emergence of the cloud. It really informed my view of the problem I was solving. I would work with CIOs from big companies. When you were talking to CIOs, [you realized] the cloud was going to change IT radically and it didn’t have tools to manage and secure it.” McKinnon used that knowledge to help launch Okta, a cloud identity company that has raised over $228 million and grown to unicorn status with a valuation of $1.2 billion.

But Tzuo and McKinnon are far from alone. The alumni network of former Salesforce employees is deep and growing. In fact, I spoke to several executives who cut their teeth at Salesforce recently including Clara Shih, CEO, at Hearsay Social; Alex Bard, CEO, Campaign Monitor; Jager McConnell, CEO, Crunchbase and Andy MacMillan, CEO at Act-On Software. Each felt that being part of Salesforce had been an enormous influence on them and how how they run their companies today.

In fact, these folks have often formed bonds that lasted long after they left Salesforce. There is a strong network of Salesforce alums that includes regular in-person meetings, a Slack channel, Facebook groups and other means of staying connected to one another. McConnell says he and Shih recently hosted a dinner for Salesforce alums, who are now CEOs and he found it tremendously useful to talk to other people facing similar problems to him who come from a comparable background.

Many alums look to help one another whether they worked together directly or not when they were at Salesforce. “It’s such a strong culture. Andy [MacMillan] and I didn’t know each other [when we were at Salesforce], yet we still feel like kindred souls,” Shih said. She says it stems from the culture, from learning to think and operate a certain way — and all of that carries forward, even after leaving the company.

“I ask Andy for help all the time and I’m not shy about asking my [Salesforce] network [for assistance],” Bard said. He says that people talk about the “Paypal Mafia,” the group of executives and venture capitalists that came out of Paypal that includes Peter Thiel and Elon Musk — but he believes that there is a similar dynamic at work with Salesforce alums.

MacMillian sees a kind of flywheel effect within the Salesforce executive alumni network. When you go to a SaaS company, and you’re looking for smart, competent people, there aren’t that many sources he says, so people tend to feed off what they know — and what they often know is Salesforce.