To be clear, Gab.ai isn’t a part of YC — instead, Torba participated in the incubator through his previous startup, Kuhcoon (now known as Automate Ads). However, his login to YC’s private social network, Bookface, has now been disabled.

“Once you’re purged from the network, you’ve lost all the ability to interact and network and post job listings and connect with different founders,” Torba said.

While Torba paints this as a free speech issue, YC told BuzzFeed that he was kicked out for “for speaking in a threatening, harassing way toward other YC founders” — particularly in this Facebook comment:

All of you: fuck off. Take your morally superior, elitist, virtue signaling bullshit and shove it.

I call it like I see it, and I helped meme a President into office, cucks.

In Torba’s telling, this was just the culmination of a longer process of disenchantment with Silicon Valley liberalism in general and YC in particular. He described himself as a lifelong “conservative Republican Christian,” a fact he said he hid at first because he worried “it would be a hindrance to my career — which proved to be true.”

Torba became more open about his beliefs six months ago, which he said immediately led other YC founders to “all start piling on” and  “call me a racist, a bigot.” Torba also began to tweet at YC President Sam Altman (who endorsed Hillary Clinton), eventually prompting Altman to block him this past week — after that, in Torba’s view, Altman was looking for “any way to purge me from the Y Combinator network.”

“Y Combinator clearly has chosen their side,” he said. “They’re pandering to immigrants [rather than] American entrepreneurs. They clearly do not welcome Trump supporters.”

Sure, YC stood by Trump supporter Peter Thiel, but Torba said the difference is that he’s not rich and powerful like Thiel.

Torba had also tweeted a screenshot of another founder’s Facebook comment (the founder’s name was removed) that “being a black, Muslim or woman in the USA is going to be very scary” with his own comment: “Build the wall.” Then, in another thread, a YC alum alluded to Torba’s behavior without mentioning him by name, prompting him to jump in: “Say my name when you talk about me, coward. Build the wall.”

Now all of that might make it sound like Torba was working pretty aggressively to burn bridges at YC, but he insisted that’s not the case.

“Here’s what it was: There were the two or three founders that jumped in harassing me on my posts trying to get me in a gotcha moment, trying to test my understanding of immigration law, trying to make me look like an idiot,” he said. So by saying “fuck off,” in his view, he was just telling them, “I don’t owe you anything, I’m done with this.”

“I wasn’t trying to burn the bridge or anything,” he added.

[Hat tip to BuzzFeed for spotting the story and pulling the quotes from Facebook.] 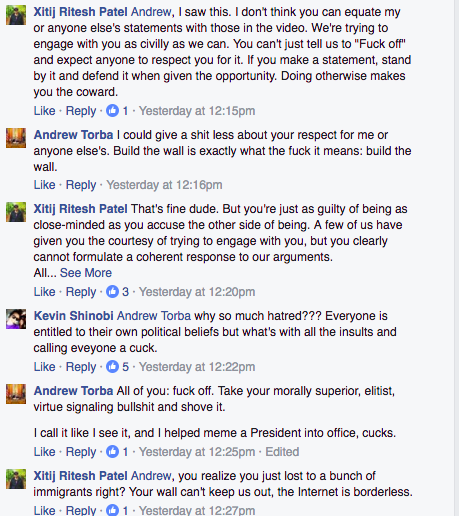 Update: In an email, YC Partner Kat Manalac emphasized that Torba was removed because of his behavior, not because he supports Trump:

The main thing I want to get across here is: we believe that everyone is entitled to their political beliefs and they are welcome to support the political candidates of their choosing. Having an honest, rational dialogue between all parts of the political spectrum is going to be important for us as a country moving forward. But under no circumstances do we tolerate harassing or threatening other founders (or anyone for that matter). Regardless of what you believe, if you act in a hostile way that makes the community feel unsafe, you will be ejected from the YC community.

Manalac added there have been “very few instances” where someone has been removed in the past, and YC hasn’t commented publicly, “But this time we’re saying something because Andrew has been very vocal, and he’s been spreading lies about why he’s been removed.”

Lastly, you can go here to read the full Facebook thread.