Broadband at home, motion sensors and high definition video cameras led to a renaissance in home security systems over the past decade.

But big problems remain in residential security, says Alex Pachikov, CEO and cofounder of Sunflower Labs with CTO Chris Eheim. Stationary cameras don’t detect would-be intruders until they are close or actively trying to enter the home, he said.

Palo Alto-based Sunflower Labs has raised a seed round of $2.1 million to build a “home awareness system” that monitors homes beyond the doorway, yet is easy to install.

Major home improvement retailers are selling smart cameras and smart doorbells from companies like Nest, Logitech, Ring, Canary or Oco. But these are positioned at a home’s entryways, and stationary.

The Sunflower System uses a different approach. It includes what the company is calling Smart Lights and Flying Cameras.

Its sensor-laden smart lights are solar-powered, and can detect motion, sounds and vibrations while illuminating the perimeter of a property or its walkways.

The lights communicate with a camera-equipped quadcopter. Whenever there’s uncommon activity identified by the smart lights, the quadcopter flies to where the action is, to capture video and transmit it to the cloud. 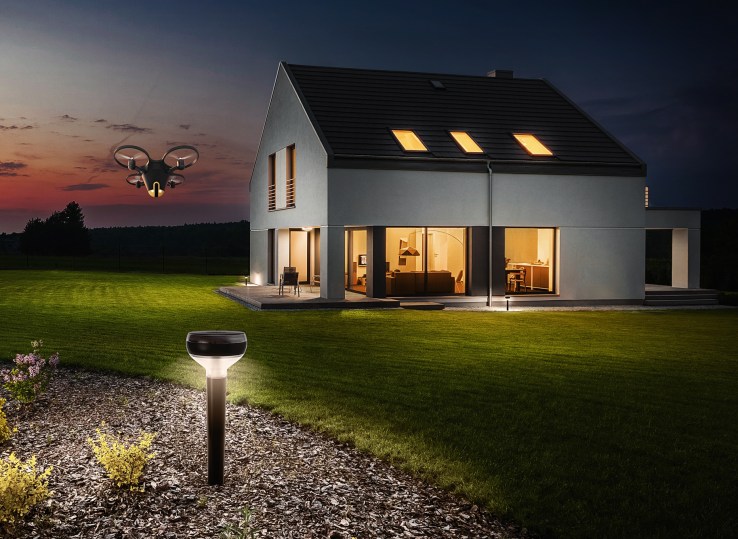 Rendering of the Sunflower System Flying Camera and Smart Lights.

Users of the Sunflower System get notifications via a mobile app when there’s activity detected on their property. The app learns, over time, what kind of commotion is routine and which is abnormal.

Users can ignore alerts for routine occurrences like a spouse’s car coming up the driveway or their own kids playing basketball in the driveway. But they can opt to take a deeper look at the video if something aberrant is happening.

“The idea is to identify suspicious activity only, and do something about it before trouble arrives at your doorstep,” says Pachikov. “We also want to preserve our users privacy. We have come up with a way to do this without recording 24-7.”

General Catalyst led the seed round in Sunflower Labs.

Evernote founder and Managing Director with the firm, Phil Libin, said he backed Sunflower in part because he knew the founders well. Pachikov worked for Evernote for a decade, and recruited other former Evernote employees to his startup.

But Libin also relished the concept behind the Sunflower System.

“Home security is one of those industries where products haven’t been living up to their promise. The current systems for monitoring your whole property do not enhance your enjoyment of your home as much as they make you paranoid. By tying together really smart sensors, drones, and artificial intelligence you can have a house that looks out for itself and gives you more awareness as to what’s going on,” Libin said.

The investor expects Sunflower Labs to use its seed funding to prove out its technology.

Pachikov added that the company will be selling direct to consumers online, and working with smart home installers and electronics retailers to distribute its systems in 2017.

The Sunflower System can be reserved for $25 online today. The company plans to charge a monthly fee for its services rather than sell the hardware as a one-off.