A massive social media protest is exploding on Facebook, not Twitter for a change, yet Facebook’s dehumanized Trending system wasn’t picking it up. People around the country are checking in on Facebook at the Standing Rock Native American Reservation in an effort to supposedly hinder local Morton County police from targeting protesters attending in person to fight an oil pipeline through historic tribal lands.

[Update 3:15pm PT: About two hours after we published this post, Facebook is finally showing a Trend for #NoDAPL, which stands for “No Dakota Access Pipeline.” The fact that it says 790,000 people are talking about the Trend, between 2X and 100X the chatter of other Facebook Trends, shows just how late Facebook was to surfacing the latest in the Standing Rock protest saga.

Facebook tells us it did previously have a ‘Dakota Access Pipeline’ trend on Saturday. But the renewed swell of interest and people trying to learn about the check-in protest may have warranted a swifter renewal of the trend. This article has been edited to discuss the trend’s absence in the past tense.]

The Morton County’s sheriff has denied using Facebook for surveillance. Still, the social media protest has proceeded to bring concerns about the environmental and cultural impact of the pipeline to national attention. While some users have taken to masking their posts, explaining their absentee check-ins by using incorrect spellings like “Randing Rock,” there’s still more chatter about the exact term than many other Facebook Trends.

Even if Facebook showed related Trends in past weeks, or was trying to suppress the spread of the check-in story since police may not be doing surveillance on protesters with geotargeting, it’s still a huge topic of conversation. Including a Trend highlighting a story that discusses the surveillance denial by the sheriff or why people are checking in could have provided important context for users. 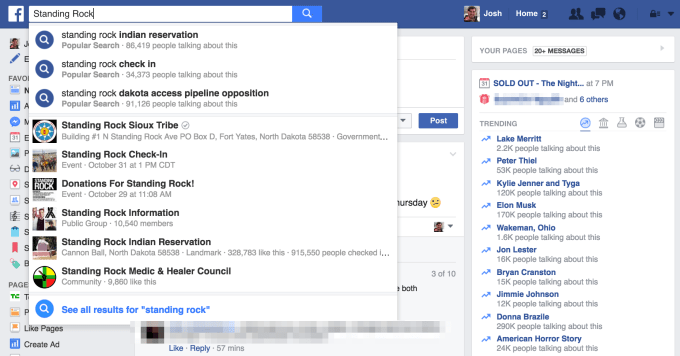 The New York Times went as far as to publish a story headlined “Why Your Facebook Friends Are Checking In To Standing Rock.” Yet “Standing Rock,” “Native Americans,” “pipeline,” “Missouri River,” and related terms didn’t show up as Facebook Trends to any users until long after the check-in protest began over the weekend. Until around when we first published this story, related terms weren’t even in the “Emerging Trends” pool from which Facebook internally surfaces trends, which can be seen through Facebook’s data tool for journalists called Signal.

Standing Rock wasn’t a Trend despite Facebook’s own search tool showing “Standing Rock Indian Reservation” was a popular search, with more than 86,000 people talking about it. But you’d only know that if you searched for it. Standing Rock and related terms have much more chatter than other topics Facebook was showing as Trending, such as actor Bryan Cranston saying he’ll move to Canada if Trump is elected.

Since Facebook removed its human curators, it switched the Trends design to remove the immediately visible descriptions of the trends and now only shows the trending term itself, in this case #NoDAPL. Since there’s no way to guess what that terms mean, only users who click on the Trend or hover over it to see the related news link would learn about the pipeline protest. 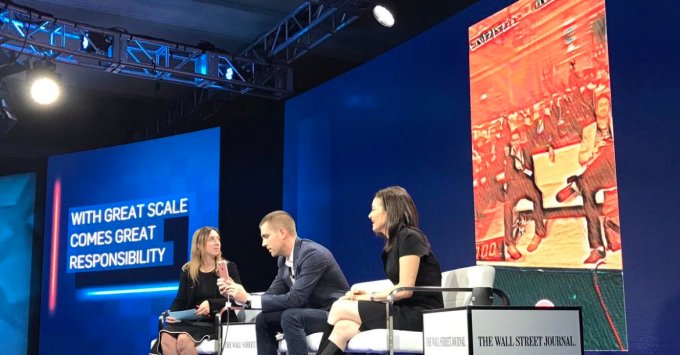 The failure to identify a huge, viral protest that’s built off of Facebook’s own location check-in feature shows how badly Facebook needs to overhaul Trends. Facebook also failed to surface any trends related to the police shooting of Terence Crutcher until more than a day after the news became a topic of national discussion.

Facebook continues to deny it’s a media company, repeatedly labeling itself a technology platform. While that argument may have been bolstered by its decision to fire all its human Trend curators, that move has given way to multiple instances of glaring errors in Facebook’s Trends. It has highlighted fake news several times that a human curator could have easily debunked, while omitting or being slow to pick up on critically important news stories surrounding human rights issues like the Standing Rock protest.

Facebook’s COO Sheryl Sandberg and CPO Chris Cox again reiterated this month that Facebook is a tech company, not a media company, but admitted it has responsibilities to its readers since it has become such a prolific distribution channel for news. Ensuring the day’s most important protests aren’t hidden behind frivolous celebrity dreck should be one of those responsibilities.