David Sacks has a big job ahead of him.

Formerly the CEO of Yammer, which sold to Microsoft for $1 billion, he’s doing it this time around as the head of Zenefits, trying to right the ship of a company that has halved its valuation and fired its founder for violating insurance regulations. Today he is rolling out Zenefits’ second incarnation, and in Sacks’ new future, it’s something that looks more like the promise of the Facebook platform than it does Yammer circa 2010.  Today, Zenefits said it was launching its second full version, Z2.

The “second” incarnation of Zenefits isn’t just designed to be a home base for company data, but also a service that other companies can tap into in order to use that data for their own tools. Zenefits today is opening itself up to third-party developers, which can treat Zenefits as a permanent record for employee data — like some services treat Facebook for user data — and build their services around that.

“We think this idea of suites vs. best of breed is a false choice, this has been the choice of marketplace,” Zenefits CEO David Sacks said. “You could use an antiquated suite or best of breed that’s limited. We’re building an app store for [human resources] for the first time, that’s the way to resolve this conundrum. You build an app store and you release some core apps yourself, but you allow third parties to provide best of breed apps.” 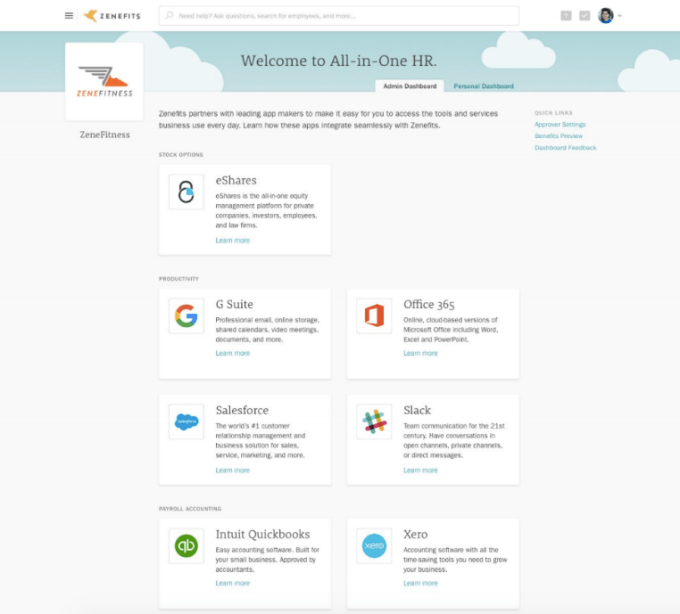 It’s been a rough 9 months for Sacks, who took over after the company ousted former CEO Parker Conrad for building tools that would help the company skirt compliance issues. Since he took over, he’s been trying to move the company past that through layoffs, shifts in culture, and now through a big shift in the company’s approach to how it treats itself as an HR software provider. During Sacks’ recent takeover, he also halved the company’s valuation to $2 billion to settle any concerns about potential lawsuits from shareholders.

Zenefits is still going to focus on building a lot of the tools itself, such as its core employee records, payroll and time-off systems. But in situations where the company simply doesn’t have the resources to attack, it’s going to be leaning on partners to convince customers that the Zenefits experience is full enough to justify moving away from an ADP. All Zenefits customers have to do is keep their employee info up to date within Zenefits, and the service will do the rest to keep things updated in other tools, Sacks says.

One example given by Sacks was eShares, an employee option- and stock-management tool that will be one of more than a dozen launch partners for Z2. By integrating eShares, Zenefits customers allow the service to add custom inputs and components to their HR workflow software — such as on-boarding and exiting employees. eShares, and other apps, get the ability to put in custom fields that collect data for their own services.

Related to eShares, Sacks also said the company was at one point working on a stock option product, but ended up killing that in favor of working with partners. That’s just one example of many, he said. “It was app a relatively small percentage of companies need, and we’d rather rely on a partner that’s gonna do an awesome job with that, versus us having to stretch and maintain that extra app.”

The ability to make apps on Zenefits isn’t exclusive to larger enterprise partners like Salesforce or eShares, however. “We want to let 1,000 flowers bloom here, anybody will be able to get a developer key,” Sacks said. Those apps will still have to go through a review process to ensure that the information is protected and not easily accessible.

There are a few other services that the company is launching within Z2. One is a benefits shopping experience, which allows employers to see more of a bird’s-eye view of every plan that’s available directly through the Zenefits experience. This isn’t exactly a huge deal because there will be so many of them, but it’s one of the first times that employers will get a total snapshot through an online service rather than relying through a broker, Sacks said. They’ll get recommendations and, of course, continue to work with brokers throughout the process to get the best deal. They can also see providers on a map relative to where employees live, just to get a sense of which plans might be best for their employee base.

There’s also a new HR app for employees, which includes clock-in and clock-out abilities and the ability to monitor flex and health care accounts. That, again, is designed to give employees the ability to not have to carry around insurance cards and just show their Zenefits cards to providers when going to the doctor’s office. Employees can easily request time off, and Zenefits will keep close track of how many hours are being taken up and how much pay that goes toward tat. 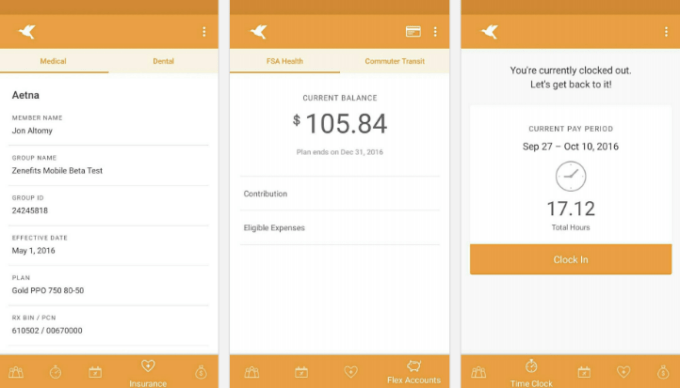 Finally, there’s a premium paid service that taps into HR advisors. It includes a constantly updated library of content from certified advisors and lawyers that gives employers best practices and offers them assistance throughout the whole HR building and maintenance process.

There is a medium-sized elephant in the room, however: Gusto. The two companies, which started off as partners (Gusto is still available as a payroll provider, Sacks says), have increasingly gone head-to-head as they release more features and become more of a suite of tools. Gusto, for example, is getting into HR, while Zenefits seeks to get into payroll services, both areas that the other has been focused on almost exclusively until recent months.

Zenefits’ Payroll service will also open up to California with this launch today, and is expanding to other states soon. Through that, employers can quickly run pay periods and take a dive into individuals’ payroll periods, as well as make quick changes to pay schedules or overall salaries.

“It kind of comes down to, when we think what are the apps that every small biz needs, we think of a long tail,” Sacks said. “HR, payroll, benefits, all small businesses need those apps, they’re at the head, that’s why we do it ourselves. By being the system that does those things you get the best data and that’s what makes you authoritative. But then there’s a whole long tail of other apps, the reason we let other people do it is just not every small business needs these things. Some small businesses need them some of the time, not all need them all the time, we feel we have to do the things we need all the time” 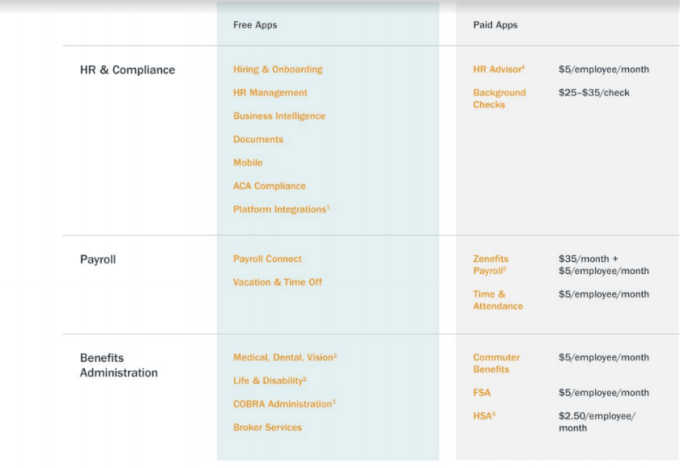 Yammer was a bit ahead of its time when it tried to open itself up as a platform. In 2010 the notion of a full-fledged enterprise App Store and platform, one in which single platforms didn’t try to accomplish everything, wasn’t completely baked. Box — essentially in Yammer’s class of next-generation enterprise startups — was not a public company and had not made attempts to do something similar.

Zenefits still has to deal with a couple big hurdles, including settling investigations and its ongoing self-reporting to states. So far, it’s incurred little in the way of fines from some states that it’s settled in, such as paying out a $62,500 fine to settle with the state of Tennessee. The process is still going in most states, and throughout it, Sacks has tried to change the optics of the company by literally labeling itself as “the compliance company” and making its internal licensing compliance app available to others.

Sacks, however, is going to give it another go. All these updates, changes, and corporate shifts are part of his attempt to turn the company around and make it worth the $2 billion valuation it set, especially relative to Gusto’s increasing value (now $1 billion) among investors. Now we’ll see if it works out and that the company can head of competition from companies like Gusto or incumbents like ADP.