A majority of Mozilla users were served encrypted pageloads for the first time yesterday, meaning their web browsing data was secured from snoopers and hackers while in transit.

The HTTPS milestone was tweeted by Josh Aas, head of the Let’s Encrypt initiative which has been working to help smaller websites switch to encrypting their web traffic.

.@Mozilla telemetry shows more than 50% of page loads were HTTPS yesterday. First time that has ever happened. pic.twitter.com/FE0FcIGPju

Mozilla, which is one of the organizations backing Let’s Encrypt, was reporting that 40 per cent of page views were encrypted as of December 2015. So it’s an impressively speedy rise.

That said, there are plenty of caveats here — the biggest being it’s just one browser, Mozilla’s Firefox, which lags far behind the dominant default browsers of the mainstream web.

Statista pegs Firefox at just a 7.77 per cent global marketshare for July 2016 vs 49.5 per cent for Google’s Chrome and 13.68 per cent for Apple’s Safari browser. 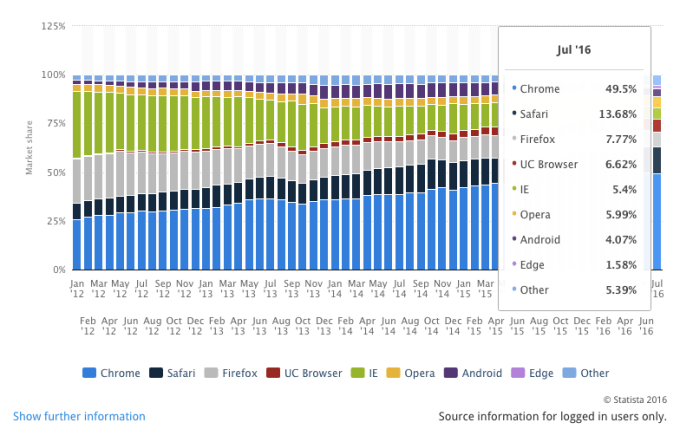 Add to that, is also only a subset of Firefox users who are running Mozilla’s telemetry browser performance reporting feature.

The telemetry feature is also not default switched on for most Firefox users (only for users of pre-release Firefox builds).

And it’s just a one-day snapshot.

All of which is to say the sample here is certainly very salami sliced and clearly not representative of mainstream web usage. So, while the speed of the shift to HTTPS among this user group is noteworthy and encouraging, there’s still plenty of work to be done to make encrypted connections the rule for the majority of web users and web browsing sessions.

The Let’s Encrypt initiative, which exited beta back in April, is doing some of that work by providing sites with free digital certificates to help accelerate the switch to HTTPS.

According to Aas, Let’s Encrypt added more than a million new active certificates in the past week — which is also a significant step up. In the initiative’s first six months (when still in beta) it only issued around 1.7 million certificates in all.

.@LetsEncrypt has added more than a million new active certs in the past week. https://t.co/cl70ZLWr5m

As well as carrots there are sticks driving websites to shift to HTTPS. One of which is Google, which has said it intends to flag unsecured connections in its popular Chrome browser — thereby brandishing the threat of a traffic apocalypse for sites that do not roll out encryption.