“We shall escape the absurdity of growing a whole chicken in order to eat the breast or wing, by growing these parts separately under a suitable medium. Synthetic food will, of course, also be used in the future. Nor need the pleasures of the table be banished. That gloomy Utopia of tabloid meals need never be invaded. The new foods will be practically indistinguishable from the natural products from the outset, and any changes will be so gradual as to escape observation.”

That prediction was made by Winston Churchill in the March 1932 issue of Popular Mechanics in an essay entitled “Fifty Years Hence.” Yes, the yet-to-be wartime prime minister of England predicted lab-grown meat, nuclear power, cell phones, genetic engineering and artificial intelligence. In 1932.

But Seth Bannon, who had to deal with major mistakes made early in his career, said that what struck him most when he read it was how much this far-sighted thinking chimed with the mission of the “Impact VC” he planned to create with his partner and co-founder Ela Madej. The two (who are also a couple) wanted to nurture businesses that would have an impact 50 years hence. So it seemed a good idea to borrow Churchill’s essay title for their company name.

Fifty Years (Facebook, Twitter) wants to tackle a few issues that seem to plague the relationship between entrepreneur, investor and the demands of capitalism.

While working as entrepreneurs themselves, the two had found it hard to find savvy investors that could both help them scale their businesses, but would also back the actual mission of the company. They tended to do the first but not the second.

They also found that “maximizing shareholder value” did not speak to their values in business, nor to their fellow millennials, who are often at least as interested in creating a real, profit-led business that can also have a positive societal or environmental impact.

So they decided to create Fifty Years to support entrepreneurs solving the world’s biggest problems with technology. But they didn’t want to turn into something like a charity or traditional ‘impact’ investor. They still wanted to back companies that could be both massively profitable and make a serious dent in solving big problems like climate change, education and health.

Fifty Years will invest at the seed stage, based on a built product, and ideally some market validation. Right now, Fifty Years is into synthetic biology and food tech, but it doesn’t limit its investments to any specific verticals. It just needs to be presented with big business potentials and the opportunity to solve a big problem in the world.

The pair make for an interesting combination. 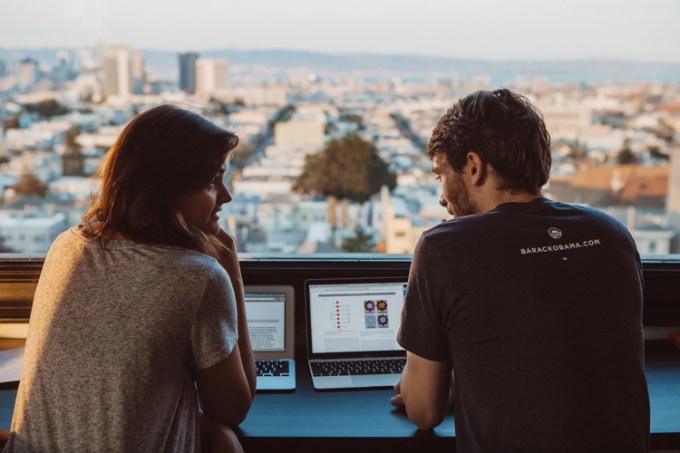 Madej, who was a serial tech entrepreneur and a Y Combinator alum (YC S12), is also a vegan, skier and contemporary dancer.

Outside of a short break as a dancer in NYC in the summer of 2013, Madej has been in tech since 2006. She co-founded and was a CEO of the Ruby on Rails software house Applicake (acquired in 2013) in Krakow in her native Poland and co-founded Base CRM. She had also been very active in the Polish & European tech scenes, becoming a partner at Innovation Nest, a leading early stage venture fund in Eastern Europe, until moving permanently to the US in 2014. She became interested in “impact investing” after realising that many of today’s tech unicorns were being built largely for a privileged, developed society rather than the world as a whole.

Bannon, an avid chess player, was the founder and CEO of Amicus, a startup that builds digital organising tools for nonprofits and political campaigns. A graduate of Y Combinator, Bannon was named twice to the Forbes 30 Under 30 list for social entrepreneurship. He was inspired to think this way because of his Mom, a social and community activist, who became disabled after a freak gas explosion in the family home. He later worked for Obama and built a digital organising tool.

But it hasn’t all been an upward curve. Lack of experience at the time meant Bannon made serious mistakes at Amicus which almost killed the company, mistakes he later published in detail before anyone else. These included the big mistake of not paying payroll taxes for several years after a simple filing error stopped the company being alerted to the problem.

“The main way it effects Fifty Years is in our ability to help our founders,” says Bannon. “Our combined experience makes us better investors. Ela has made a bunch of good decisions, and I’ve made a bunch of mistakes. Our founders learn from both.”

That difficult period means he’s perhaps more attuned to the harsh realities founders face. “When Fifty Years thinks about the future we think about the why not the what.” In other words, he says, not the method of delivery (like, say, drones) but why the startup exists in the first place, it’s mission.

Bannon thinks society is moving towards a position of wanting to make money and solve real problems. And he doesn’t mean ‘changing the world’ by “decreasing enterprise churn, or matching socks to trousers. We mean fixing the climate crisis, educating people etc. We think these businesses will be the most valuable over the next decade. And those that don’t solve these problems won’t be able to compete.”

He admits this motivation is largely driven by a general millennial thinking (though not exclusively), but that this attitude really came to the fore this year. “We want Fifty years to be a source of capital for these people,” he says. His view is backed up by research. By 2025, 75% of the global workforce will be millennials, the generation born between 1982 and 2000. Millennials, while also tagged ‘selfie-obsessed’, ‘entitled’ and ‘self-indulgent’, are significantly more engaged with sustainability and social justice than previous generations. They’re generally highly educated, they’ve had strong awareness of social and environmental issues from an early age and are keenly aware of the challenges faced by climate change.

Admittedly the short-termism inherent in most businesses works, in theory, against the Fifty Years model. But Bannon is relaxed about that: “It’s a problem for the entire industry, but it doesn’t affect us more than anyone else. We’re just funding companies that tie in their profits to their impact very closely.”

“Impact investors have been around for a long time. They will fund a cash flow business in Kenya for instance. But we’re funding very typically high growth Silicon Valley companies that are solving a big issue.”

Madej says: “The big contribution we can make is to get more money committed to vehicles that create the next Teslas. Over time the idea is to change the narrative of business to address social and environmental externalities. Like feeding people bad food and then realising you have to have expensive healthcare to offset the side effects.”

“Right now we don’t have enough computing power to model where the dollar value is in true value terms, but we will have it eventually,” says Madej.

“We use as a rough rubric the UN Sustainable Development Goals (SDGs). We look at a company that could have massive returns and have an impact on some of these goals. We fully expect to have amazing returns from this fund, then be able to create further funds,” she says.

“We have been involved in tech startups as entrepreneurs and we feel comfortable advising other entrepreneurs. We already know we could raise a bigger fund later on. But we want to get the basics right first,” she adds.

And it turns out investors/LPs in the fund are interested, especially as it’s being run as if it were a traditional VC fund with traditional returns.

Bannon says they started quickly and raised enough to make some investments, then raised the rest: “After that it was much easier.”

Their investing philosophy is that they don’t care about the sector the startup is in. But the founder needs to be care about capital returns, making a dent in the SDGs and, finally, care about doing both at the same time.

Madej: “All our companies have the potential to solve problems globally but their initial markets will be in the US, because it’s so much easier to start and scale from here.”

Eleven of the 15 they’ve invested in so far have been in the ‘YC universe’, showing that, although they don’t get special access, Madej and Bannon are sufficiently close enough to that ecosystem to be able to meet companies they might typically invest in.

Will they be copied in their approach? Do competitors loom on the horizon? They admit to feeling a little lonely out there but that the Obvious Corp founded by Evan Williams is closest to their thinking right now.

“We want there to be an ecosystem of other funds like us. We’ll need others to fill out rounds, of course” says Madej.

“We think this is an urgent problem. A lot of non-profits are badly positioned to solve big scalable, global problems, while tech companies are. But there needs to be a lot more people in this space,” says Bannon.

Next year the pair plan to double the portfolio size and also work on their related meetup Impact.Tech, which has mushroomed into a 500 person event in San Francisco, with the potential for multiple locations.

This runs monthly events with the goal of exploring all the areas of business activity in which tech entrepreneurship can solve big social and environmental problems.

“We eventually want to get to the Al Gores, and maybe even the Obamas, of this world and get them on board” says Bannon.

And with this kind of thinking, they probably will.

THE FIFTY YEARS PORTFOLIO SO FAR

Astranis: Small, low-cost telecommunications satellites. Their mission is to help bring the 4 billion people online who are without internet.

Geltor: They use biology to produce food ingredients in a safe, sustainable way, starting with gelatin.

Maderight: Making it easy and affordable for fashion brands to manufacture ethically.

Medella Health: Building a contact lens that continuously and non-invasively measures glucose through the interstitial fluid in the eye.

Memphis Meats: Growing real meat, without the animals. Mission is to bring to the world a tastier, healthier, more sustainable, and more humane meat.

ExVivo: Noninvasive skin patch for allergy testing. Mission is to make it easy and affordable for anyone to get tested for allergies.