Facebook is stealing the Stories format and invading countries where Snapchat isn’t popular yet. Today in Poland it launched “Messenger Day”, which lets people share illustrated filter-enhanced photos and videos that disappear in 24 hours, just like on Snapchat.

By using the international popularity of Messenger to spread the Stories format, Facebook could boost retention and return visits to its chat app while becoming the primary place where people post off-the-cuff lifecasting content before they get hooked on Snapchat. Sources in Poland spotted Messenger Day and sent TechCrunch’s John Biggs these screenshots. We reached out to Facebook for comment, and it told us “We know that people come to Messenger to share everyday moments with friends and family. In Poland we are running a small test of new ways for people to share those updates visually. We have nothing more to announce at this time.”

Additionally, Facebook says it frequently runs small tests before rolling products out to other regions, but there’s no guarantee it will expand this feature beyond Poland. It’s unclear, but Facebook might not bring it to the US unless it really blows up abroad. 60 million people in the US and Canada already use Snapchat daily, and aggressively pushing Messenger Day there could annoy them. But in countries where people aren’t that familiar with Snapchat, it has nothing to lose by experimenting.

Much of the feature works exactly like Snapchat Stories, with the ability to draw or add text to images. Facebook’s one big innovation with Messenger Day is the use of graphic filters as suggestions for what to share, instead of just to celebrate holidays and events or to show off your location like with Snapchat’s geofilters. 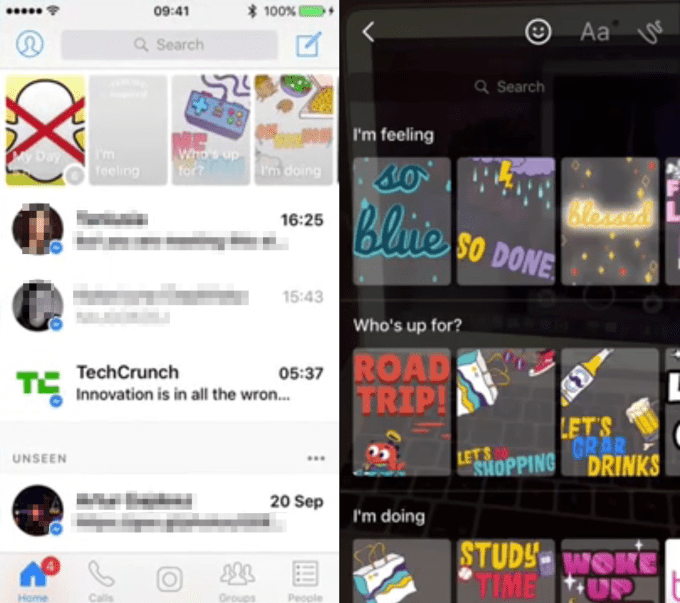 At the top of the Messenger thread list, users see a row of tiles representing “My Day” and friends’ Days they can watch, but there are also prompts like “I’m Feeling”, “Who’s  Up For?” and “I’m Doing”. Tapping on these tiles provides a range of filters “I’m feeling…so blue” with raindrops and a bubbly blue font, “I’m feeling…blessed” with a glorious gold sparkly font, “Who’s up for…road trip” with a cute car zooming past, or “Who’s up for…Let’s grab drinks” with illustrated beer mugs and bottles that cover the screen. 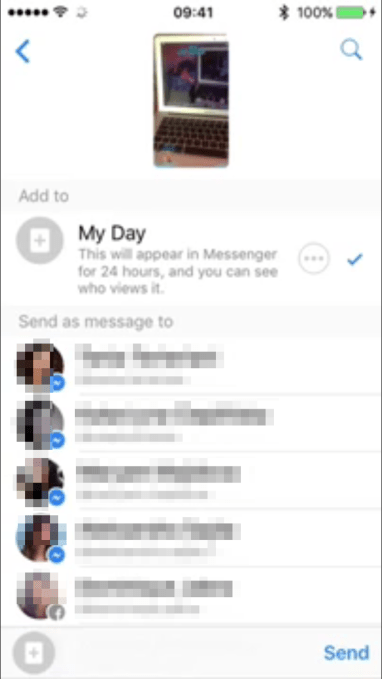 This feature allows people to share visually appealing images even if they aren’t great artists or especially creative. These prompts could also spur usage when people are bored, sparking their imagination.

Messsenger is already an app people use all day with close friends, so it could end up a better home for the Stories format than cramming it into Facebook’s core app, which the company tested as “Quick Updates” and scrapped.

The Stories slideshow format has proven to be a powerful way to share more than the perfectly polished pics people post to Instagram. That’s why Instagram launched its own clone of Snapchat Stories, but its CEO Kevin Systrom admitted “They deserve all the credit”. But Facebook suffers from the same problem of people only sharing their biggest life highlights, which don’t happen that often. Facebook is already so stuffed with features and probably isn’t opened as frequently as Messenger.

Now Messenger Day wants to make this casual sharing option ubiquitous before Snapchat can. That’s a similar strategy to Instagram Stories, which I hear is flourishing in places like Russia where Snapchat adoption is low. This is the benefit of Facebook being a giant company earning $2 billion in profit a quarter. It can clone fast thanks to its enormous team, translate and localize features for testing in certain markets, and cross-promote what works with its inescapable feed and chat apps.

Messenger Day might not lure many people away from Snapchat, but Facebook could stunt its competitor’s growth by racing to to bring its own Stories to the unclaimed corners of the earth.