Gametime has raised $20 million in venture funding for an app that allows people to find and buy tickets to a nearby concert or sporting event at the last minute, and even up to a half-hour after a game begins.

Founded by Brad Griffith in 2013, Gametime has steadily added tickets from more professional sports teams and to a wider variety of events over the years. It sells tickets from both primary sources and resellers.

The startup has also rolled out features and video advertising to attract millennial sports and music fans.

For example, Gametime’s Snap and Sell feature lets users take a photo of a paper-based ticket to list it on their marketplace, and price it automatically.

And Gametime Connect allows app users to find and follow friends, see the events for which they’re purchased tickets, or have tickets to sell, then buy one to go along.

To promote its Connect feature, Gametime created a video spot that quickly racked up over 4 million views on Facebook, driving thousands of transactions for the company.

The campaign helped Gametime stand out in a market rife with competition.

Gametime is up against longstanding marketplaces like Ticketmaster and Ticketweb (both owned by Live Nation), Stubhub and its parent company Ebay, Pandora-owned Ticketfly, and private equity and venture backed players like Vivid Seats, SeatGeek and Applauze.

The startup, which now employs about 65 full-time in San Francisco, estimates that the “last-minute” segment already represented some $7.5 billion in North American ticket sales last year. 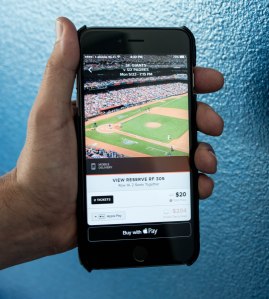 Colin Evans, Gametime’s Chief Revenue Officer and a founding employee of Stubhub, said he predicts this segment will grow, thanks to the fact that consumers, especially 18-34 year olds, are increasingly purchasing via smartphones and on-the-go.

Griffith added that stadiums’ adoption of mobile instead of paper tickets has also helped drive the trend, and Gametime’s growth.

Virtually all stadiums and professional sports teams now accept mobile tickets, he said, and many smaller music venues that you would not expect to be technologically advanced do as well.

Early Gametime investor Jeff Mallett, a part-owner of the San Francisco Giants and former Yahoo executive, said he expects the startup to use its new funding for hiring, and to build new event discovery features for ticket buyers, and tools for ticket suppliers.

Mallett said, “We are a clean sheet company with no legacy behind us. We want to be the best option, on the supply side, for teams sending us inventory.”

Updates: New information was added to this story to reflect the corporate ownership of different ticket selling sites that compete with Gametime.