The few who still think Kickstarter can replace venture capital need not look further than a new report from Polygraph to see just how separate the world of crowdfunding is from traditional early-stage finance.

While it’s easy to point to products like the Pebble Smart Watch as a sign that crowdfunding sites like Kickstarter are gaining ground against traditional institutional financiers and angels, the reality is that the vast majority of projects were never in the sights of Sand Hill Road. Rather, Kickstarter is illustrating that all it takes to sustain innovation outside of Silicon Valley is the right incentives.

Across the entire United States, technology products and services make up only 3.7 percent of all Kickstarter projects. For contrast, 43 percent of projects are categorized as film or music endeavors. Not only is tech underrepresented for the country overall on the platform, it’s underrepresented in the cradle of innovation — Silicon Valley. Instead of leading by a mile, as it regularly does in venture capital, the region is neck and neck with a handful of other cities.

Nationally, roughly 3,273 tech projects have been backed on Kickstarter. San Francisco on its own represents just over 7 percent of these. In contrast, PitchBook data suggests that the same region accounts for more like 13 percent of tech companies nationwide. That’s almost twice the influence, and that’s generously excluding tech bastions like Palo Alto, Menlo Park and Mountain View.

Left: Compiled with data from PitchBook Right: Pulled from Polygraph

On the other hand, hardware is overrepresented on the Kickstarter platform. Twenty-four percent of tech projects, or nearly 2 percent of all projects in San Francisco, provide hardware. This is in contrast to the relatively tiny PitchBook estimate of 2.9 percent for regional venture-backed startups. 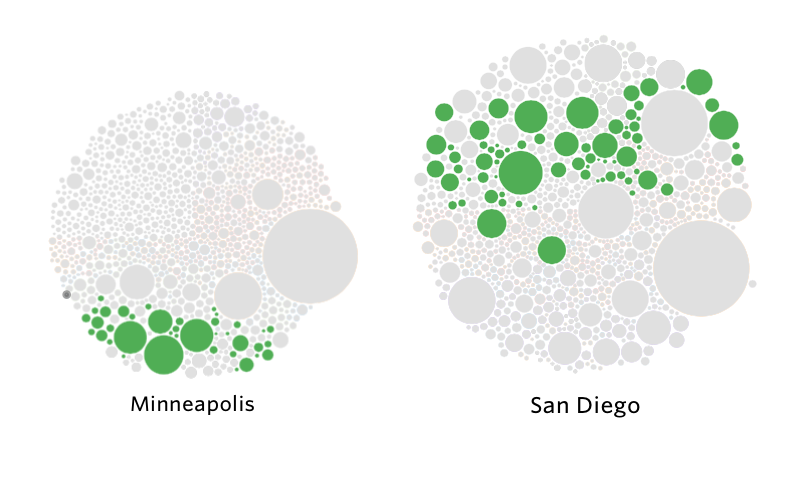 So if the Bay Area is underrepresented in software and overrepresented in hardware, where does it stand overall? With respect to the total number of Kickstarters, the city fails to stand out. After crunching the numbers, San Francisco can claim ~237 tech projects on Kickstarter, while New York can claim ~262, and that’s with only 2 percent of the city’s projects falling under the tech label.

Cities like Minneapolis and San Diego stand out even more as tech hubs in ways not reflected in traditional metrics of venture capital. However, the cities’ most backed projects are a smart water bottle and a pair of 3D audio headphones, respectively. Compare this to the traditional unicorn titans incentivized by places like Silicon Valley and you would be looking at Uber and Airbnb.

While it may be next to impossible to close a multi-billion dollar growth round on Kickstarter, the platform’s diversity makes a strong case for how easy it can be to displace innovation. Kickstarter heavily incentives hardware projects as a result of their rewards-based financing model.

Historically, Indiegogo was the primary location for tech projects, with Kickstarter receiving the connotation of artists’ paradise. Software projects have propagated on the site, but only after the company relaxed regulations on the tech category back in 2014. The effects from this are still present today and are only becoming more confusing with the rise of equity crowdfunding. Unfortunately, the same homogeneity that helped the platform grow limited its ability to deliver on expectations to disrupt the entire traditional startup ecosystem model.

What the data does show is just how rapidly other cities can pick up the slack from Silicon Valley when a strong creative community takes over — it’s just a matter of dialing in the right incentives for the types of products created. Network effects have kept innovation concentrated in a small number of regions for a very long time as a result of density of people, capital and education. While crowdfunding has utterly failed at upsetting this, it has shown that it doesn’t take Robert Noyce and the traitorous eight to create entirely new innovation ecosystems where power has nothing to do with your Twitter followers or limited partners.