Mercedes-Benz Vans and drone tech startup Matternet have created a concept car, or as they’re calling it a Vision Van, that could change the way small packages are delivered across short distances.

The Matternet M2 drones, which are autonomous, can pick up and carry a package of 4.4 pounds across 12 miles of sky on a single battery charge in real world conditions.

They are designed to reload their payload and swap out batteries without human intervention. They work in conjunction with Mercedes-Benz Vans’ on-board and cloud-based systems so that items within a van are loaded up into the drone, automatically, at the cue of software and with the help of robotic shelving systems within the van.

A self-flying, Matternet M2 drone hoists a package near a shipping container.

Matternet designed a hard-shelled case to protect and carry any given cargo. The drone’s payload can transmit data about the contents and destination of a given delivery.

For a logistics company using the Matternet M2 drones or Vision Vans, that data could serve as a kind of proof of delivery, and alert users the instant a package has arrived.

Andreas Raptopoulos, co-founder and CEO of Matternet explained that while all of this sounds and looks like the stuff of sci-fi, the vans with integrated drone technology could be put to immediate good use where regulations allow.

The Vision Van can, for example, launch a Matternet M2 drone with a payload to a final destination that’s not accessible to a van or driver, whether that’s due to traffic in a populated urban area or a lack of safe roads in a more rural or disaster-stricken area. 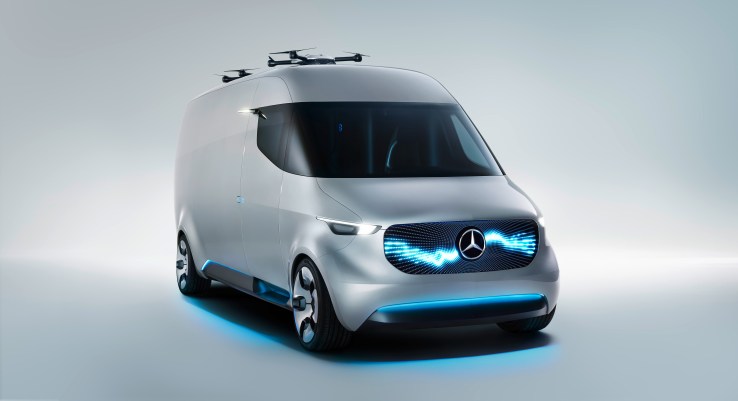 Or, the drones could fly a package from a distribution center or warehouse to a van so a driver can ultimately take the package down and walk it up to a customer’s doorstep nearby.

A division of Daimler, Mercedes-Benz may be better known for its luxury and sports cars. However, the Mercedes-Benz Vans unit sold 321,000 vehicles in 2015, according to a company financial statement, with popular models in travel and logistics including the Sprinter, Marco Polo, Vito (known as the Metris in the U.S.) and Citan.

According to a company press statement Mercedes-Benz has invested an undisclosed amount in Matternet. According to SEC filings, Matternet has so far raised $9.5 million of a targeted $11.5 million venture funding round.

Raptopolous declined to comment on the filing or the company’s funding status. Executives from Mercedes-Benz Vans were not immediately available for an interview.

Earlier this year, Matternet developed unmanned aircraft systems for UNICEF that are being used to transport blood samples for HIV testing in Malawi. The initiative could speed up the delivery of care to HIV-positive infants across the country where 10,000 children died of HIV-related illnesses in 2014.