mSurvey, a Kenya based startup specializing in mobile data collection, has raised seed capital as it looks to expand its survey business in partnership with retailers in sub-Saharan Africa.

Safaricom, Cross Culture Ventures, and the Virgin Group’s Alpha Angels joined an investment round in the four year old business.

“It’s a seed round. I can’t disclose the amount, but part of it comes from the $1 million Spark Venture Fund Safaricom set up to invest in high growth startups,” said mSurvey CEO Kenfield Griffith. “We’ll use the funds to drive value add to merchants using Safaricom’s Lipa Na M-Pesa [bill pay and digital payments] service and to further fuel growth in Africa and other emerging markets,” he added.

Griffith, an MIT alum originally from the Caribbean nation of Montserrat, saw an opportunity to service this void while completing his dissertation in Kenya. “I was looking for research input from individuals that was hard to find or collect… At the same time I noticed nearly everyone walking around had a mobile phone. That’s when I realized here’s a way to ask people questions and collect data in emerging markets at scale,” said Griffith.

He teamed up with Kenyan software developer, Louis Majana, to flesh out the code, and they co-founded mSurvey around a proprietary application to canvas digital information through mobile phones and SMS. 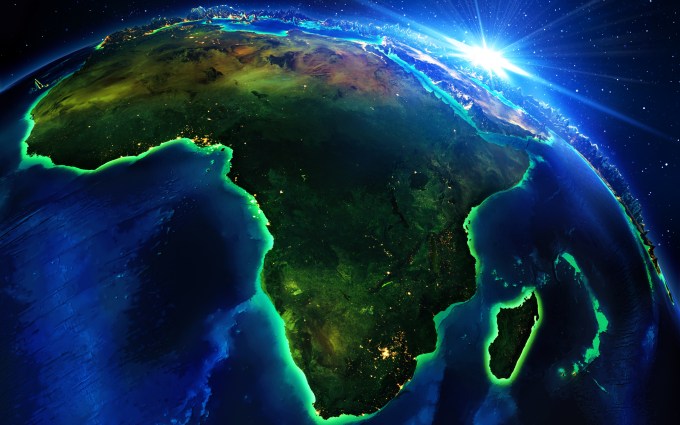 Griffith would not divulge mSurvey’s revenue but noted they’d “started booking it almost immediately after launching.” He also elaborated on the startup’s business model. The market research service maintains a database of registered (not spammed) respondents and an algorithmic means to segment and poll them digitally.

In Kenya, for example, individuals who respond to a survey receive 50 shillings (about 50 cents). mSurvey’s primary revenue source comes through an annual subscription structure, used mainly by companies, who gain different research capabilities by price. There’s the basic package (around $6K a year), the mid-tier package, and the enterprise package ($18K), according to Griffith. 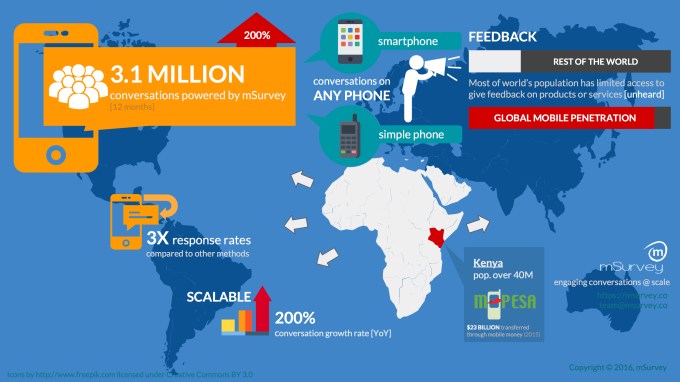 During a conversation in NYC, Griffith offered a live mSurvey demo from his laptop. He created a survey of perceptions of Kenya’s Rio Olympic performance. Griffith created a population and questionnaire through mSurvey’s interface and within about 10 minutes he was reviewing results gathered from Kenyan respondents on their mobile phones.

The potential in Africa for value-add data as commodity has become a common refrain.

A decade of growth and reform in the continent’s core economies and business expansion fueled by double digit FDI increases have exposed a dearth of reliable market stats. This became evident when recent GDP revisions in several African countries revealed outdated statistical methods were missing billions of dollars in economic activity.

The African Development Bank has estimated roughly 55 percent of Africa’s economic activity occurs in the informal sector, which creates a large blind spot when it comes to consumer markets. The growth of consumer spending, e-commerce, mobile penetration, and Africa’s improving broadband landscape are changing this while creating opportunities for data services.

“Consumer research in Africa is emerging as a formalized professional industry, which is a great thing for businesses and investors,” said Aubrey Hruby, an Africa consumer goods consultant and senior Africa fellow at the Atlantic Council.

Hruby highlighted how rudimentary data collection has been for global businesses in Africa, “For too long African markets have been data deserts. When KFC moved in they had to use a hybrid of low tech — people with clipboards estimating foot traffic — and high level satellite imagery to decide where to locate their restaurants and what to offer.”

While Hruby was unaware of a reliable revenue projection for Africa’s survey research market, she noted actors are moving into the consumer data space. Big global firms such as Nielsen and Euromonitor have upped their African consumer research offerings. An American company, GeoPoll, has also built out a digital survey service and database in 20 African countries.

Aided by its new investment, mSurvey plans to expand into Nigeria, Ghana, and Zambia by the end of 2016. Griffith sees its product partnership with Safaricom — Kenya’s largest telco offering a range of digital products — as a selling point for new alliances. “They are the leaders in mobile money [through M-Pesa] and we’ve attached what we call conversational commerce to that. This should offer leverage in other markets,” he said.