Mixing up precisely controlled, strobing LED lights and finely timed good vibrations, Slow Dance is aiming to bring a slice of science to a living room near you. Blending high-tech with organic materials and the aesthetic of optical illusions, the kinetic sculptures are launching in the form of a Kickstarter campaign today.

Stroboscopic art installations in science museums and art galleries are nothing new, but it has always been surprising to me that the effect hasn’t been exploited more for organic art pieces aimed at the home market. The team behind Slow Dance is here to change just that.

Science, art, technology and a solid dose of “what the hell is that“? What’s not to love.

“I’ve been exploring phenomena outside of the range of human perception for years,” says Jeff Lieberman, the creative soul behind Slow Dance. His previous pieces include Slink (2005), which combines a spring with stroboscopic lighting to create otherworldly effects and Lightbulb (2007), which depicts a lightbulb, illuminated and suspended in thin air. If you’re a Discovery Channel fan, you might recognize him from his Time Warp series, too, where Lieberman explored the world of high-speed photography to show off cool phenomena. 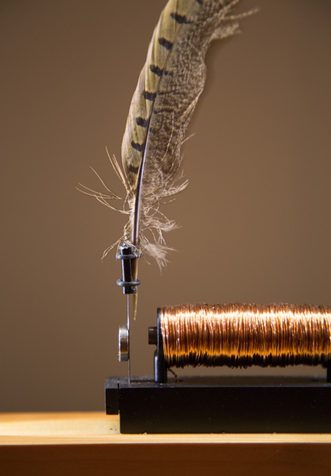 By exposing the electromagnetic causing the vibrations, Slow Dance gets a steampunk feel to it.

For Slow Dance, Lieberman is building a rapidly strobing LED light into a picture frame. Blinking at 80 times per second, the light looks solid — your eyes can’t perceive the blinking. By then synchronizing the light to high-speed vibration, the object in the frame looks like it is moving in impossibly slow motion. Not on a TV screen — right in front of your eyes. Woah, dude.

The effect is achieved due to the same persistence of vision that makes movies work: By playing frames in rapid succession, it tricks your brain into thinking that it is seeing movement.

For the Slow Dance picture frame, by making the lights blink slightly out of phase with the vibration, you end up with a mesmerizing slow-motion effect. Coolest of all, it’s possible to touch the objects in the frame. They will still appear to be moving in slow motion, despite being handled by the viewer.

A marriage of light and motion

“When my two friends Eric and Emily, both dancers, got married, I wanted to give them something that would reference their dancing with each other through life. 50 revisions later, I ended up with Slow Dance,” Lieberman told me. The piece was originally meant to vibrate two pieces of metal, but through experimentation he found that it wasn’t organic enough to really represent dancers. “I eventually brushed up against a branch on the walk to my lab, and eureka! The natural intelligence and beauty of organic materials.”

For Slow Dance, the material being vibrated is held in place by a pair of rubber bands, so it’s possible to insert any number of items, as long as they are moderately flexible; Feathers, plants etc. 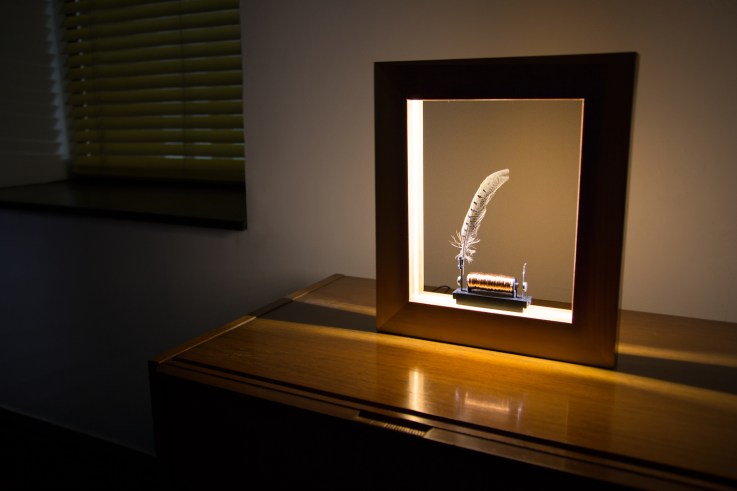 The project is a crowdfunding project, launching on Kickstarter today. While the technology behind it is relatively simple, manufacturing anything is an exercise in complexity. Lieberman tells me he is confident he’ll be able to deliver, however. His previous Kickstarter project — another kinetic sculpture — raised $33,500 and was successfully delivered. For Slow Dance, he teamed up with Etonnet (who helped deliver Makey Makey).

“This is not our first rodeo,” Lieberman says. “If everything goes without a hitch, we’d be delivering in January, so March feels safe. Having already completed a successful Kickstarter, I know how many unknowns can crop up along a delivery schedule, so I want to play it safe but always remain open to the unknown.”

The biggest challenge with the project to date hasn’t been technical, the artists tell me, but the fact that it’s hard to show stroboscopic effects on video.

“People see slow motion video all the time now,” Lieberman laughs. “There was a big worry that people would see the piece and just assume they were looking at slow motion footage of a normal thing! We tried to make sure the documentation made it clear that it is slow motion in real life.”

The Slow Dance project is currently on Kickstarter, priced at $250 (slightly less if you’re able to snag an early bird discount).