Can Google spring back from its social failures with a bare-bones video-calling app that unites iOS and Android users? Today it’s launching Duo, which lets you video call people one-on-one via their phone number.

The problem is they’ll have to download the app but won’t get any bells and whistles or the ability to connect with Google Chat, Hangouts, Spaces, the upcoming Allo messaging product, or Google’s Android SMS app. Google’s adding one more silo to its mess of communication apps.

Duo was announced at Google I/O in May and rolls out globally today on Android and iOS 9 in 78 languages. It will be a hard sell considering how late to market Duo is compared to strong, sensibly intertwined products like Facebook Messenger and Apple’s iMessage/FaceTime.

You can watch our video demo of Duo here:

Duo is best understood as a no-frills FaceTime competitor that works with Android devices instead of just Apple products. Nabbing those users who want to video call their Android friends is one avenue for success.

Duo looks a bit bland, though, since it can’t do group calling, video effects or text chat. If you want to video call someone without Duo, you’ll have to invite them over SMS with an app download link. Starting from zero users with that level of uncertainty might push people to go with a competitor their contacts are likely to already have. That’s a big disadvantage versus the ubiquitous Facebook Messenger and Skype’s video call features.

“The logic is that [apps] will succeed if they’re solving a use case really well,” Google’s VP of product management for consumer communication Nick Fox tells me, though this ignores the fact that a product needs to solve something others haven’t already.

Fox explains that Google focused on three things with Duo. First, “if there’s anything that was our North Star, it was to be super, super simple.” Second, Fox says, is speed and reliability, thanks to Duo being built on Google’s WebRTC video framework to handle HD or 2G. And third, “The human element. You don’t hear Google talk about this all that often, but we wanted to enable the human on the other end of the call to really be the experience.”

At least Duo succeeds at that. You open it, with no need for a Google account, and see the camera facing you. At the bottom is a list of recent calls and frequent contacts, with another tab that contains a full list of contacts who either have or don’t have Duo. Start a call and it goes full-screen. If someone misses a call, they’ll get a notification. That’s basically it. Don’t expect any Hangouts mustaches or costumes, but the video quality is solid.

The one innovative feature Duo sports is called Knock-Knock, which lets the recipient of a call see the caller before they accept and turn on their own camera.

Fox says that otherwise, entering a call can be “pretty abrupt” since you don’t know if they’re lazing at home, in business mode at the office, or on the go. With Knock-Knock, “as a recipient of the call you see them beforehand so you know their state of mind. I make silly faces to my kids…so when they see the preview, they start with a laugh.” 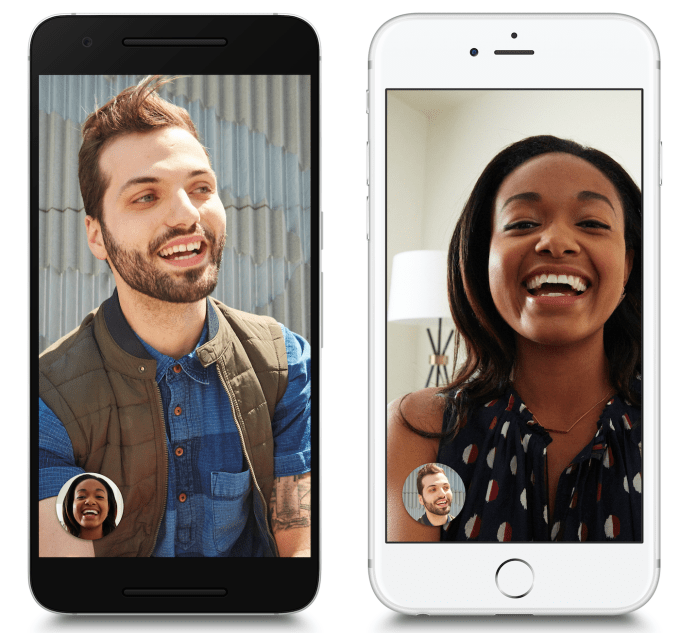 This late in the game, Google will be fighting a steep uphill battle to get Duo traction. Video calling isn’t a non-stop use case like text chat, and is often an extension of those conversations. Marooning Duo in its own app and not allowing it to connect to any other Google communications apps or websites is a bizarre choice. People might forget to use it even if they do download it.

Duo’s best bet will be the developing world thanks to its optimization for poor network connections like 2G. It can degrade video quality or switch to audio calling if there’s weak connectivity, and it can seamlessly hand off between cell and Wi-Fi connections in mid-call without dropping.

The developing world has only recently gotten the phones and network connections necessary for video calling. The top chat app there, Facebook’s WhatsApp, still doesn’t have video calling, although it’s in the works. Perhaps a dedicated app for video calling over data could find some of the success WhatsApp did replacing SMS.

With Duo and Allo (and Google Chat, Android SMS, and Spaces) for consumers, RCS messaging services for carriers, and Hangouts for the enterprise, Google is still a bit chaotic when it comes to communication. It seems to be reeling from failing to secure the acquisition of WhatsApp, which turned Facebook into the dominant global player.

The whole Duo situation is embarrassing for Google considering how the technology involved in Hangouts seemed light years ahead of its time — almost five years. Google only now getting serious about mobile video chat is cringeworthy.

Duo is either Google blowing up its consumer communications stack by surrendering the rest of the chat space and keeping Duo separate so the underused apps don’t weigh it down, or it’s another misstep by adding more disconnected islands to the archipelago. Despite all its engineering prowess when it comes to organizing information, Google is still awkward when it comes to creating inter-human community.