Nothing tells the story of how the Mexican tech ecosystem is steaming ahead in Latin America quite like the rise of fintech.

On the flip side, Mexico’s fintech industry has everything VCs daydream about: large untapped markets, highly scalable models, startups with solid traction, successful references around the world and multiple exit scenarios.

While ecosystem observers may have predicted this momentum, it’s worth taking a step back to analyze the forces driving Mexico’s fintech ascent in order to provide a framework for other industries and countries in the region.

Mexico seems to be the ideal market to launch a fintech startup in Latin America. First off, there are plenty of experienced founders bringing a wealth of unique knowledge on the business, product and technical side. They are unleashing innovation by leveraging the solid financial infrastructure private companies and government have created in the past two decades.

Moreover, the financial services industry is diverse, competitive and ever-changing, beating in time to the cutting-edge speed of technology. Finally, angel investors, family offices and VCs are all over founders in this space, eager and willing to invest more and faster.

If you are preparing to start your first or next company, Mexico’s fintech opportunity is worth a long look. It may be your best shot at building the next great startup.

Since the start of the Mexican tech wave in 2012, a new breed of experienced, tech-savvy and take-no-prisoners founders have emerged and are changing the face of the entrepreneurial ecosystem.

It is common knowledge that innovation in Silicon Valley has been driven by first- or second-generation immigrants. Innovation can be tracked back to the Middle East, Russia and South Africa —  more than half of the multibillion tech companies have been created by “foreigners.” So when foreign founders move to Mexico, we should all be cheering for them — even if the odd ecosystem hater won’t count their products as Mexican innovation (they might be closet Drumpf voters or, worse, delegates!).

Any fintech development relies on a network of pipes, connectors, valves and adapters for data and money to move through an economy.

Last month, ex-investment banker and now Secretary of Finance and Public Credit, Luis Videgaray Caso invited most of the above to a private meeting about the upcoming fintech regulation. It was an impressive get-together, not just because the government is finally paying attention to the sector, but because of the high-level, candid and sometimes heated discussions with the highest ranking regulator.

Mexico represents one of the largest consumer markets in the world, with an emerging middle-class paired with a growing service and manufacturing economy. Against this backdrop, the financial services industry is full of contrasts: Large, nimble banks and financial institutions thrive in a country with abysmal credit penetration, low financial inclusion and scary fraud levels.

In fact, the SME credit gap is a whopping $10 billion per year, the gap in access to banking amounts to more than half of the population and the potential savings if fraud is stabilized to acceptable levels would save around 3 percent of GDP. These large numbers are what make the opportunity so urgently interesting.

Most of the solutions to these persistent problems involve technology that will increase productivity and change lives all over the country. Financial inclusion and credit penetration are indispensable for a fair society. The emerging middle class across Mexico could gain access to home ownership, better consumer credit and more investment opportunities. SMEs could get access to short-and long-term financing to invest in working capital, growth and, yes, technology. More software in SMEs would in turn bring new opportunities for startups. There is an unprecedented opportunity to change lives and transform industries with fintech.

Another exciting aspect of the future of fintech in Mexico is that most models will be built and scaled in an AI-enabled and mobile-only world. P2P platforms will scale with intelligence embedded into their algorithms and payment systems will include API-friendly platforms. Born in post-Uber Latin America, crowdfunding platforms and wallets will target millions through mobiles. Not only can we catch up fast to the U.S. and the U.K., but founders can build smarter companies with bolder disruption potential.

About pipes and valves

Any fintech development relies on a network of pipes, connectors, valves and adapters for data and money to move through an economy. Mexican government, banks and financial companies have been investing in technology and infrastructure since the 1990s. Companies such as BBVA, Citibank, BlackRock, American Express, VISA and Western Union have dynamic Mexican divisions with broad coverage. Today, more than half of internet users bank online and microcredit institutions have fostered a better environment for financial inclusion by creating a culture of credit in micro-business owners.

More recently, one of the more ambitious reforms Peña Nieto’s administration passed in the first half of its presidency was related to the finance sector. It provided a more favorable legal environment for credit activity to increase competition with more than 50 new bank licenses delivered in the past three years. Financial inclusion means a larger tax-payer base and is in turn a priority to increase the taxable base. Today, only 50 million Mexicans pay taxes; 30 million remain outside of the tax system.

Smartphone penetration and internet usage is growing faster than the most optimistic predictions, set to reach more than half of the population according to certain estimates. This alone brings endless possibilities of leapfrogging old tech like ATMs.

Mexican fintech is taking off fast — and it’s just starting.

Speaking of retail, the largest convenience store chain, department store company and electronics retailer in LatAm are all in Mexico. Consumers can pay bills, receive remittances and make simple financial transactions in all of them. It is such a good business for retailers that most, including Walmart and Elektra, have their own bank. Moreover, large CPGs like Bimbo, Pepsi and Coca-Cola visit 500,000 stores every month, weaving a logistic network that founders can leverage for financial services that require physical distribution.

Banks around the world are forever more involved in the entrepreneurial ecosystem. In Mexico, retail banks are large, growing and profitable (for now). After a wave of M&A activity in the 2000s, the financial services sector is dominated by Spanish and American banks (BBVA, Citi, Santander, HSBC and Scotiabank) and emerging local groups (Banorte, Gentera, GBM and Vector). These companies are building innovation centers and investing in Mexican startups as fast as they can. Recently, AMEX led a Series A round in payment system PayClip, Gentera invested in pay-day lender Mimoni, GBM led real estate crowdfunding Briq’s seed round and Crédito Real acquired Resuelve tu Deuda.

The next big thing

Despite all the progress in the Mexican entrepreneurial ecosystem, angel investing is still badly lacking. However, a rare bright spot is in the financial services sectors. For example, angel investors have carried most of the financial burden for launching Resuelve tu Deuda, KiWi, Prestadero, Cohete and OpenPay. Indeed, seasoned former and current financiers are participating as angel investors, including Augusto Alvarez, Fernando Padilla, Jorge Ortiz, Fernando Lelo de Larrea and Javier Creel.

Entrepreneurs launching in Mexico face a large and diverse base of institutional investors. We could all complain about the experience and interactions with some of them, but the truth is, we are lucky to have so many.

The other good news is that, in general, the financial services industry has a strong appeal to investors. It has something for every kind of potential backer. The show-me-size investor couldn’t be happier when you show them 100 billion opportunities in Latin America. The show-me-traction investor is reassured by your hockey stick and ever-growing numbers — we have seen more traction in fintech than in any other industry.

Vanguard investors —  show-me-new —  will be delighted when you explain your AI layer or blockchain protocol. More traditional investors, the show-me-the-exit kind, will be impressed by the M&A activity in the sector around the world, and, for back-up, you could always seduce the show-me-a-crowd-but-call-me-the-lead investor with a syndicate that includes local VCs, American VCs and strategic investors.

We are already seeing the result of this wave of optimism not only in the seed stage but also in the Series A stage where VCs have led large rounds, most notably Kueski, Konfio and PayClip, respectively closing $10 million, $8 million and $8 million rounds. The table below shows the increased activity and how Mexico dominates Latin America in this space. 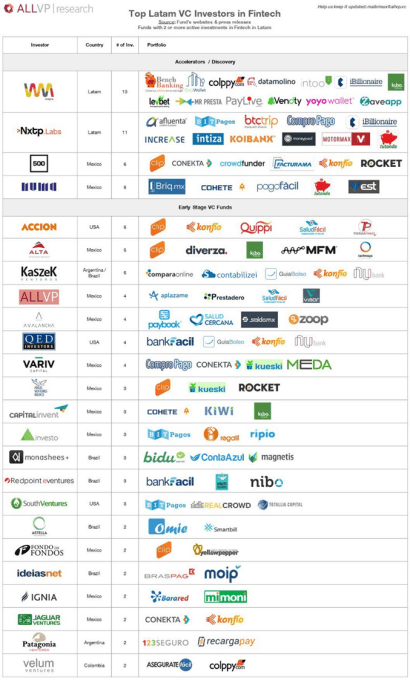 But not everything in the garden is rosy. Mexico’s financial regulation was not designed for fast-paced innovation. Despite all the goodwill shown by the government, the money is still not in the bank when it comes to regulation. The industry as a whole faces the risk of a scandal related to a platform used by organized crime and professional scammers. Despite the promising results, scale is still years in the making. Having said that, Mexican fintech is taking off fast — and it’s just starting. You don’t want to be missing out.

Disclosure: Of the 18 Latin American companies mentioned in the article, four of them (Prestadero, Salud Fácil, Aplazame and Visor) have received investment from ALLVP, where Federico Antoni is a partner and managing director, with Federico Antoni as Advisor.