Matt Joseph Contributor
Matt Joseph is the founder and CEO of Locent.

A new leader of the free world will soon be voted into office. Shortly thereafter, he or she will begin a minimum four-year journey to steer the country toward prosperity, safety and global leadership.

With many changes undoubtedly coming, let’s take a look at the technological impact of one of the biggest initiatives that President Obama has championed: healthcare reform.

Whatever your stance on the Affordable Care Act (ACA), there’s little doubt that it has been responsible for ushering into the U.S. healthcare system a new era of technology. The controversial law ignited an explosion of new digital health offerings, and set the entire healthcare system on a path of advancement that will continue to extend access and increase the quality of healthcare administration for years to come.

Digital health gets an injection of capital

The ACA’s Health Information Technology for Economic and Clinical Health (HITECH) provisions created tens of billions of dollars in incentives for healthcare providers to implement federally approved IT systems. These systems, known widely as electronic health records (EHRs), were key to healthcare reform and created the strongest platform to date for digital health innovation.

While EHRs faced significant barriers to adoption, namely resistance from physicians trained for years to document patients using pen and paper, they came with the promise of faster and more efficient care. For those not swayed by financial incentives and the improvement of patient care, the government baked in penalties for noncompliance.

Obamacare’s incentive scheme was strikingly effective. Today, 96 percent of hospitals across the country have adopted EHRs. In 2009, before the ACA had been passed, only 12 percent of hospitals had adopted them, reporting up-front cost and maintenance expense, uncertain return on investment and inconsistent IT systems as the biggest barriers to adoption.

Despite their rapid EHR adoption, healthcare providers have faced challenges along the way. Many EHR systems are not interoperable, preventing patients from seamlessly transitioning between different facilities and departments. Furthermore, security is a concern; 113 million individuals were affected by EHR breaches in 2015. Nonetheless, these challenges opened the door for a thriving ecosystem owing its existence to the ACA and President Obama: healthcare IT entrepreneurs. 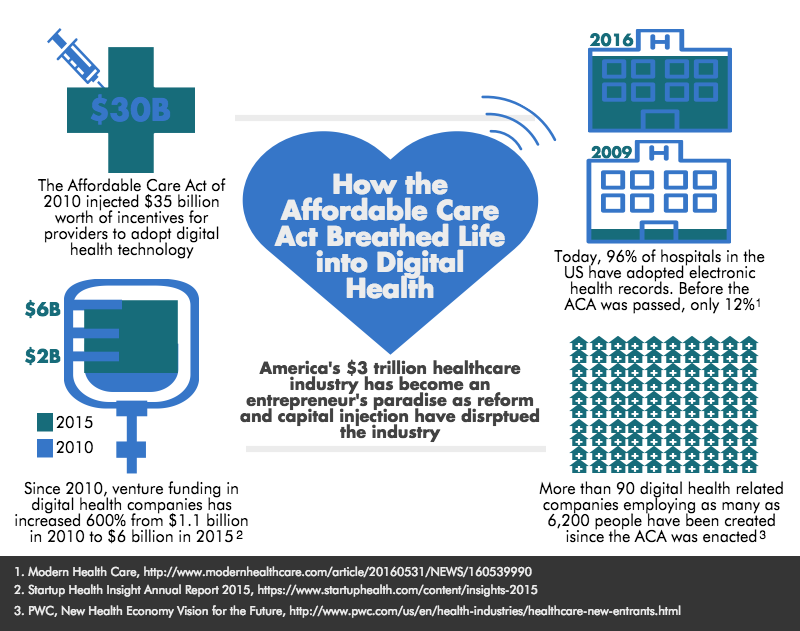 The ACA has unleashed a flood of entrepreneurs and startups into what some project to be a $233.3 billion industry by 2020. According to PwC, more than 90 new companies related to digital healthcare have been created since the ACA was signed into law. Similar to the advancements of EHRs, many of the these firms are leveraging technology to increase education and transparency, link patients with doctors and support networks and improve overall communication throughout the healthcare system.

The Obama administration’s reforms created a golden age for digital healthcare entrepreneurs and investors alike. Venture funding in the sector rose sharply, from $1 billion in 2010 to $6 billion in 2015. Massive deals are taking place between digital health startups and some of today’s leading VC firms. Oscar raised more than $400 million from Fidelity for its digital health insurance platform in 2016 and, last year, Zenefits landed $500 million for its employee health benefits platform.

Another promising development is that a sizeable portion of new investments in digital health over the past couple of years is coming from the healthcare providers themselves. In February, Virginia-based Inova Health System started a $100 million venture fund focused on personalized medicine. Other health systems that have recently established venture funds include Washington-based Providence Health & Services, which set up its $150 million fund in 2014, and the American Medical Association, which invested $15 million in San Francisco-based Health2047 earlier this year.

While the incoming administration could curtail some of the progress that has been made, there are many positive signs that digital health will continue to grow. New guidelines continue to require technology use in healthcare provision. In February, the Centers for Medicare & Medicaid Services (CMS) issued a rule that went into effect on July 1 and allows “face-to-face” visits to be conducted using telecommunications technology for remote diagnosis and treatment. This practice of telemedicine is projected by some to become a $34 billion industry globally by the end of 2020.

Furthermore, healthcare’s shift to value-based healthcare all but requires physicians to lower costs by implementing new technologies. With the Medicare Access and CHIP Reauthorization Act (MACRA) going live in 2017, 25 percent of a physician’s evaluation will be based on healthcare record interoperability, information exchange and data security.

Lastly, come January 2017, Mark Cuban and Lori Greiner may have competition from a new celebrity investor: Barack Obama. The president, who has expressed interest in venture capital and healthcare technology, recently said, “If I think about what would stir my passions had I not gone into politics, it’d probably be starting some kind of business.” So perhaps the steward of the digital health ship will continue to help navigate its course in the years ahead.