In 2000, Yahoo was worth $125 billion. In 2008, it rejected a $44 billion buyout from Microsoft. And today it sold to Verizon for $4.83 billion. The lesson here is, if you won the last computing platform and are on the cusp of the next one you’re not built for, you might want to sell the company.

Mobile fell on an unsuspecting Yahoo like a piano on a cartoon villain. It was a web portal. You could search and browse through a huge variety of websites. But the mobile age spurred by the iPhone’s launch in 2007 changed behavior. Instead of searching or browsing one omni-site to navigate around the Internet, we downloaded and opened different dedicated apps.

Meanwhile, content consumption patterns changed too. Instead of hour-long sessions sifting through expansive content and news sites on a desktop computer, we sought tiny snippets of mobile entertainment to fill the moments of downtime during our lives on the go.

Yahoo wasn’t built for either. It was hesitant to adapt. A few products like Yahoo Sports and Yahoo Finance were snackable enough. But the core properties had evolved to survive in a different environment. They got mobile versions mostly in design, not in function. Not only did usage slip away, reducing Yahoo’s ad inventory, but it missed out on the ad targeting data generated by social networks. 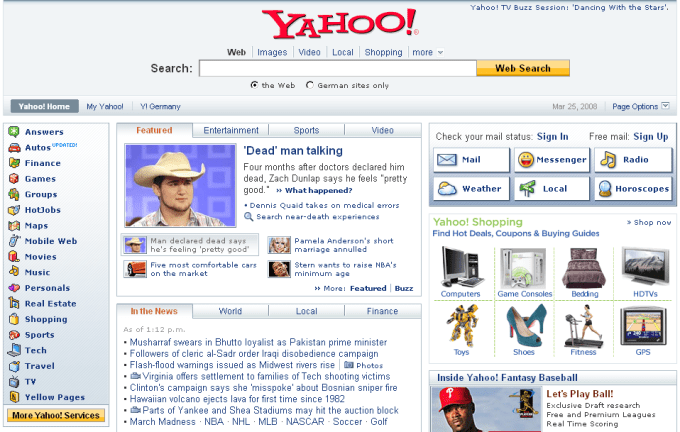 Saving the ship would have taken decisive action much earlier, like aggressive acquisitions in mobile. The company was at stake and Yahoo needed to make bet-the-company moves. Instead it bought web-first companies like Flickr and Tumblr, acquired pricey but piddling little startups, and tried to massage its basics in the right direction. But it was all too little, too wrong, too late.

For a better course of action, look to Facebook. Its core product, the News Feed, was built around short-form status updates and photos you took in your daily life. While its early mobile app sucked and Wall Street was uncertain, Facebook was poised well to adapt to mobile. 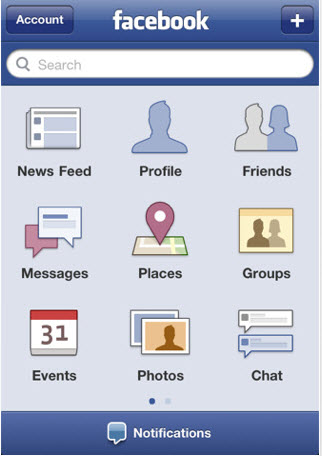 Facebook’s app circa 2009 when it misunderstood mobile

Once it scrapped the “trying to do everything at once like the website” grid design for a speedy app that defaulted to the feed, usage exploded. It spent fortunes acquiring Instagram and WhatsApp, but they were mobile-first products for use cases trending up.

Yahoo’s demise wasn’t Marissa Mayer’s fault. Restoring it to glory would have required foresight, skill, luck, but really, a time machine to get the mobile ball rolling sooner. Perhaps Verizon [Disclosure: they own TechCrunch too] will find a way to combine Yahoo’s adtech with AOL to squeeze some cash from the corpse.

The takeaway, though, is that tech teams must be vigilant about preparing for platform shifts. It’s usually not competitors that kill a company. It’s paralysis in the face of change. Now, the horizon is filled with augmented and virtual reality, voice, and artificial intelligence.

The best CEOs are getting ready. Google bought DeepMind’s AI and is implementing it across the company. Facebook bought Oculus to break into VR and AR. Uber has a self-driving car lab. And Amazon is throwing resources at Echo voice controls. If these strategies pan out, they could insulate the companies from disruption.

When the tectonic shift comes, if you keep running a company on the fault line, the earthquakes will pull you into the ground.

The tech giants that survive for decades don’t wait for the earth to swallow them. They relocate their business to where the future is with sweeping product changes, bold acquisitions, and a willingness to do what’s uncomfortable but necessary. It’s easier to pivot than make a comeback.