Astronomers used NASA’s Hubble Space Telescope to conduct the first atmospheric study of Earth-sized exoplanets and found evidence to suggest that two could be habitable. The planets have astronomers excited because atmospheric analysis revealed that they’re likely to be rocky worlds, the type of planet necessary to host life as we know it.

Planets are generally broken down into two major categories: gaseous or rocky. In order to be deemed “habitable”, these exoplanets would need to be rocky like our cosmic home.

By analyzing their atmospheres, astronomers found that these two planets are unlikely to have the light, large, and puffy characteristics of atmospheres found on gaseous worlds, like the ones in our outer solar system. Instead, data suggests that the atmospheres are more compact, similar to the rocky worlds we have in our inner solar system.

“These initial Hubble observations are a promising first step in learning more about these nearby worlds, whether they could be rocky like Earth, and whether they could sustain life.” Geoff Yoder, acting associate administrator for NASA’s Science Mission Directorate

The two exoplanets were part of a three-exoplanet system discovered back in May. Orbiting a red dwarf star located 40 light-years away from Earth, the three planets had sizes and temperatures similar to Venus and the Earth. 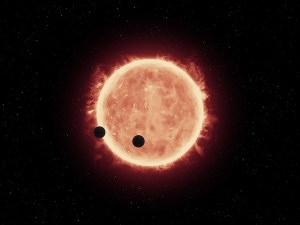 Artist illustration of two of the three planets in this system orbiting their star, which is smaller and cooler than our own sun / Image courtesy of NASA/ESA/STScI/J. de Wit

The fact that they shared similar qualities to our planet is a big deal because one of the biggest questions in astronomy is “Just how rare is the Earth, and life that inhabits it?”

To answer this question, astronomers are always on the hunt to find Earth’s twin(s) in the universe. The three exoplanets discovered in May were off to a decent start, so scientists wanted to learn more.

“These Earth-sized planets are the first worlds that astronomers can study in detail with current and planned telescopes to determine whether they are suitable for life.” Julien de Wit, MIT astronomer, lead author on study

Astronomer Julien de Wit at MIT led the team of scientists who made the discovery. They used Hubble’s Wide Field Camera 3 to study the planets in near-infrared light. By analyzing how light interacted with the exoplanets’ atmospheres, the could determine concentrations of certain elements present in those atmospheres. This technique is known as spectroscopy.

What was particularly exciting was the fact that low concentrations of hydrogen and helium were detected in the planets’ atmospheres. When high concentrations of these elements are found, it’s an automatic disqualifier for being considered habitable, so there’s still hope that the planets could be conducive for supporting life.

“The lack of a smothering hydrogen-helium envelope increases the chances for habitability on these planets. If they had a significant hydrogen-helium envelope, there is no chance that either one of them could potentially support life because the dense atmosphere would act like a greenhouse.” Nikole Lewis of the Space Telescope Science Institute.

To determine just how conducive to life these exoplanets may be, scientists want to learn more about the exact chemical make-up of their atmospheres, the surface pressure and range of temperatures found on the planet.

“Now we can say that these planets are rocky. Now the question is, what kind of atmosphere do they have?” Julien de Wit, MIT astronomer, lead author on study

Through more sensitive atmospheric analysis, astronomers could search for biosignatures, like carbon dioxide, ozone, water vapor and methane. Biosignatures like these are produced by living things, and aren’t likely to occur naturally, so they act as little red flags telling scientists that “Hey, there might be life living on my surface!”

With this in mind, the researchers hope to conduct follow-up observations using Hubble and future telescopes like the James Webb Space Telescope, scheduled to launch in 2018.

“With more observations using Hubble, and further down the road with James Webb, we can know not only what kind of atmosphere planets like TRAPPIST-1 have, but also what is within these atmospheres. And that’s very exciting.” Julien de Wit, MIT astronomer, lead author on study