One year ago today, NASA’s New Horizons spacecraft flew by Pluto and forever changed how we think about this frozen world.

After more than nine years and three billion miles of traveling through the solar system, New Horizons swung by Pluto and its moons on July 14th, 2015. Although the spacecraft was moving at over 30,000 mph, it managed to capture images and data that revolutionized our understanding of Pluto and Kuiper Belt objects in general. 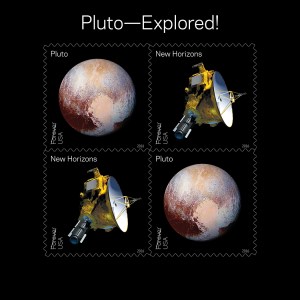 “To say that New Horizons shook the foundation of planetary science is an understatement—discoveries already culled from the pictures and compositional and space environment readings have not only introduced us to the Pluto system, but hint at what awaits as scientists examine other worlds in the Kuiper Belt.” – NASA press release on New Horizons flyby anniversary

With its iconic heart and blue, hazy atmosphere, Pluto has proven to be more complex and dynamic than scientists anticipated. A mission that was more than two decades in the making successfully made the world fall in love with Pluto all over again, even inspiring the U.S. Postal Service to pay tribute.

One year after New Horizons’ historic flyby, here are some of the most surprising things we’ve learn about Pluto. 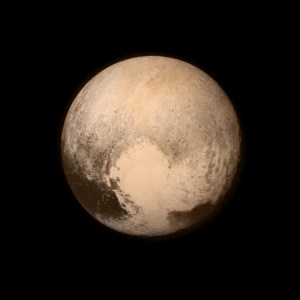 Image of Pluto taken by the Long Range Reconnaissance Imager (LORRI) aboard New Horizons, on July 13, 2015 / Image courtesy of NASA/JHUAPL/SwRI

Pluto’s frozen heart was one of the first interesting features revealed in the initial images sent back from New Horizons during its approach. The image above was taken on July 13th, 2015 – one day before the flyby – when New Horizons was 768,000 kilometers (476,000 miles) from Pluto’s surface.

As the spacecraft neared closer to Pluto, more was learned about this unique feature. Informally known as Sputnik Planum, the heart-shaped geological feature is actually a nitrogen glacier. In fact, it is now the largest known glacier in the solar system. 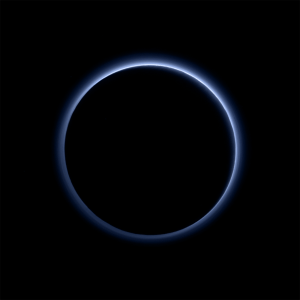 Extending more than 200 kilometers above the surface, the blue haze layers were one of Pluto’s most striking features discovered by the spacecraft.  Scientists believe that Pluto’s atmosphere is created through chemical reactions of sunlight interacting with nitrogen and methane on the dwarf planet. The chemical reactions create soot-like particles, forming a smoggy haze. 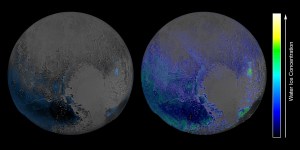 On Earth, we have water-ice that constantly goes through a large-scale volatile cycle. New Horizons discovered that Pluto has not just one, but four volatile ices (methane, nitrogen, carbon monoxide, and water) that go through freezing and precipitation cycles.

The volatility is initiated as Pluto moves closer to and further away from the sun throughout its orbit.

Of particular significance was the finding that water ice is widespread across Pluto’s surface. The water ice acts as Pluto’s crustal bedrock. NASA writes that it’s the “canvas on which its more volatile ices paint their seasonally changing patterns.”

With icy hills, glaciers, snakeskin terrain, and snow-capped mountains, the diversity of Pluto’s surface was incredibly unexpected. Much of this geological complexity is the direct result of Pluto’s multiple volatile ices, making their mark on the surface as the dwarf planet works its way around the sun.

Not only was Pluto found to be diverse, it’s also likely a dynamic, active world. Images of the surface appear to show sheets of ice that have flowed, or may currently be flowing, similar to the way glaciers move here on Earth. 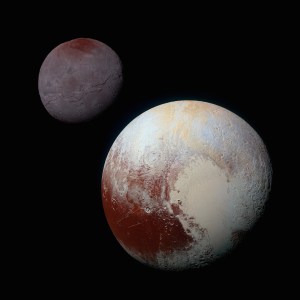 New Horizons brought eyes to a small planetary body deep into the solar system and made the world fall in love with Pluto all over again. The spacecraft’s findings challenged the scientific community’s definition of a “planet” and re-energized the debate around Pluto’s planetary status.

Today, New Horizons is 300 million miles beyond Pluto and heading toward its next target: a Kuiper Belt object known as 2014 MU69. The spacecraft is scheduled to rendezvous with 2014 MU69, an ancient object thought to be one of the early building blocks of the solar system, on January 1st, 2019.