Made In Space, the company that owns and operates a 3D printer on the International Space Station, has announced their next big project: growing optical fiber in microgravity.

The company is scheduled to send a new manufacturing product to the ISS in the first quarter of 2017. If initial tests are successful, the company could begin producing higher-quality optical fiber for applications here on Earth, like fiber-based internet, medical devices and sensors for the aerospace and defense industry.

The idea is that microgravity could possibly be an ideal environment to grow fiber. Today, optical fiber is used in many ways, but perhaps the application we’ve heard about the most is for telecommunications purposes (like in Verizon FiOS or Google Fiber). 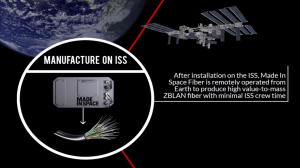 Infographic courtesy of Made In Space

With fiber-based internet, information is transmitted through fine, hair-like glass fibers with pulses of light. While this is much faster than transmitting data with electrical impulses through copper wire (the traditional method used by companies like Comcast), its efficiency is limited by the quality of the glass.

Terrestrially produced fiber, grown under the effects of gravity, suffers from certain glass impurities and microcrystal formations. These impurities contribute to scattering and absorption loss and reduce the overall quality of the fiber. This can result in signal degradation and becomes especially problematic when transmitting data across long distances. 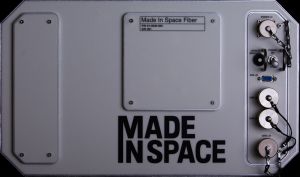 Made In Space’s microgravity-optimized, miniature fiber drawing system / Image courtesy of Made In Space

Made In Space will attempt to create a better glass with their new product, “a microgravity-optimized, miniature fiber drawing system.” While a quantitative comparison is premature, the company believes that microgravity-grown optical fiber would improve both the response time and throughput advantage compared to traditional optical fiber currently in use for telecommunications.

Made In Space has partnered with Thorlabs, an optical fiber and laser company. Together, they’ll produce test quantities of microgravity-grown fiber on the ISS, and run further tests on the product once it’s returned to Earth.

If results are promising, Made In Space is prepared to develop larger scale optical fiber production facilities in space.

“The goal of this partnership is to combine our in-space manufacturing expertise with Thorlabs’ optical fiber expertise in order to rapidly develop microgravity-manufactured high-quality fiber and introduce it into existing and new markets.” — Andrew Rush, CEO of Made In Space

The project was one of the twelve new research agreements awarded by the Center for the Advancement of Science in Space (CASIS) announced today. CASIS, selected by NASA in 2011 to manage the use of the ISS, acts as a gatekeeper and helps determine which experiments are allowed on the station.

Once on board, Made In Space will use their new manufacturing facility to produce at least 100 meters of optical fiber. While the promise of a superior microgravity-grown, fiber-based internet is exciting, we’ll have to wait for that initial batch of fiber to come back down to Earth next year for a true comparison.