You can now post old content to your Snapchat Story. That’s just one of the sweeping consequences of Snapchat’s new feature “Memories”. It creates a smart camera roll alternative in Snapchat where you can import your existing Snaps, search by caption or recognized objects, creatively embellish and re-share clips, and keep sensitive content for “My Eyes Only”.

Memories fundamentally shifts Snapchat to encompass the past rather than only being about the present. Yet by allowing you to modify previously shot content and add it to your story with a white border that signifies it’s a memory, Snapchat lets you share later and stay in the now

Snapchat tells me it set out to create the most human camera, and making the camera roll come alive was the obvious next step.

The team wanted to fix the experience of handing someone your phone in person. With the ability to tap-to-fast-forward through saved Stories, they can breeze through your adventures, lingering when they want. And “My Eyes Only” means you don’t have to worry about them swiping too far to something they shouldn’t see.

Snapchat Memories begins rolling out now on iOS and Android starting on the West Coast with the goal of being globally available within 30 days.

Started from the bottom

The new feature has been ready and in testing for months. But Snapchat’s team tells me CEO Evan Spiegel is the kind of artist that really needs to sleep on ideas to make sure they feel right. After all, Memories alters the basic physics of Snapchat. Apparently a big percentage of what Snapchat builds never ships, and Memories incorporates features the company was experimenting on across the product. The company refused to talk on the record, but insists that saving what matters has always been an important part of the Snapchat philosophy. But now, rather than saving to the camera roll, you save to Memories, which is quicker to access, cull through, and hand off.

Memories lives beneath the camera home screen of Snapchat — a space the startup had reserved for it. You swipe up to reveal Memories. But it’s also now the default place where Snaps are saved to, unless you toggle it to save copies to your camera roll only or as well.

This could be a lifesaver for teens who break or lose an un-backed up phone. Snapchat saves to the reliable Google App Engine cloud, and can be recovered when users log in from their new phone.

Memories is private. Only you can see your Memories unless you explicitly share something via Chat, Story, or export. 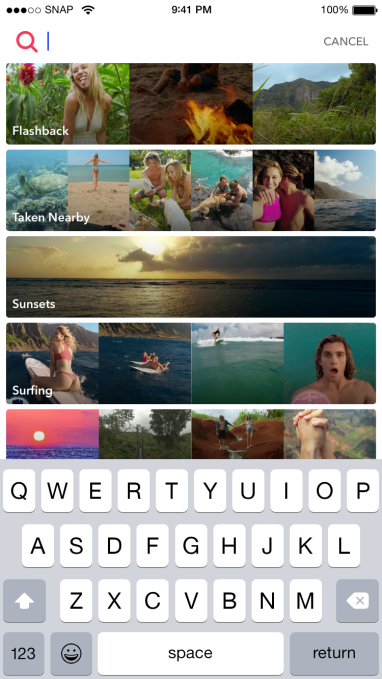 You have the option to import all your previously saved Snaps from your Snapchat camera roll folder, though you can’t back up everything in your phone like with Google Photos unless you do some tricky folder management on your computer.

All your saved photo and video Snaps plus your Stories appear in the main Memories tab. This can searched by hundreds of keywords that Snapchat will identify in the captions, emoji, stickers, dates, or locations in your Snaps. But thanks to the augmented reality talent Snapchat has been hiring lately, Memories searches can also identify objects in your content, from cats to hats to sunsets, surfing, or Hawaii.

In case you don’t know what to search for, Snapchat will show pre-made suggestions including Flashback, a TimeHop/Facebook On This Day clone that shows snaps from this date in the past. There’s also Taken Nearby, so you can find what you captured last time you were here. It uses a variable distance radius to home in on a restaurant in a dense city, or a whole school in the suburbs.

Swipe over inside Memories and you can see your whole camera roll too, though it won’t be imported, save to the cloud, or searchable.

Edit The Old, Or Stay Private

Memories search makes it really quick to find a set of snaps related to a theme and share them with friends via chat, or use the new Story creator. Just press and hold on a piece of content to open the editor. You can edit your old Stories with Snapchat’s tools, then send them via chat to specific friends or upload them for all to see. All the geofilters and timestamps from when you shot a snap can be resurrected, and you can even edit or move old captions, doodles, stickers, and emoji.

Suddenly, Stories aren’t just new content. They can include anything you’ve ever shot. But to give a little preference to content shot live, Snapchat adds a thick white border with the date taken to old Memories you share. This way they stick out and won’t be confused for new. The only exception is if you add a memory from the last 24 hours to your Story. Then it will fit right in without the border. 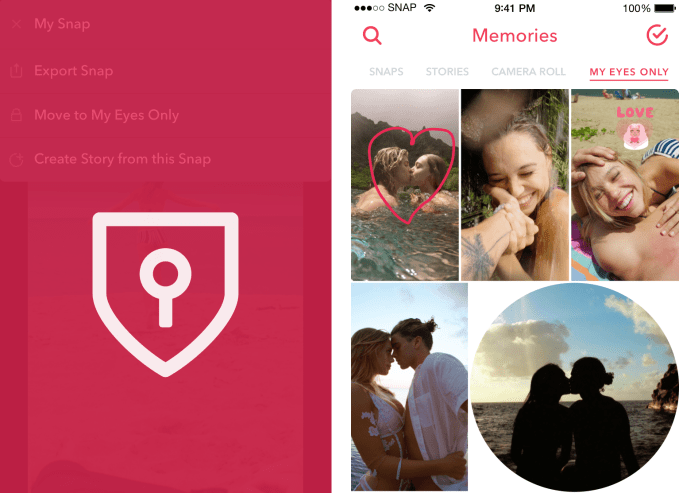 In case there are steamy or silly shots you might not want friends and parents to see, they can be added to “My Eyes Only”. This section of the app can be passcode protected, but be careful, as not even Snapchat can recover what’s in there if you lose your key.

Snapchat built Memories specifically for the experience of sitting around a dinner table after a vacation. The company writes “We realized that Snapchatters want to feel comfortable showing their Memories to friends while they’re hanging out together, so we made it easy to move Snaps and Stories to My Eyes Only — and avoid awkward moments when a friend stumbles upon a Snap meant just for you.”

Go ahead, hide the kisses, cringe-worthy karaoke, and triple-chin selfies.

Overall, Snapchat Memories feels like a natural extension of the app, even if it’s by far the most complicated feature the company has added yet. Embracing old content could make Snapchat more interesting to older demographics who might not be living adventurous enough lives to produce great new content every day.

Memories is a bit of a gamble, though. People no longer have to create content in the moment, or even create it at all. They could just screenshot stuff from the Internet, adorn it with stickers and text, and spam the Stories list. That might dilute the urgency of Snapchat, where every time you saw a friend had posted something, you knew it was fresh. No re-shares of celebrity content or Throw Back Thursdays.

Hopefully spammy behavior will be discouraged by people just ignoring users who abuse Memories sharing, and it will always be obvious the content is old thanks to the border. Edit together old snaps into a new clip and share it to your Story, where it will appear with a white Memories border

Snapchat has a huge opportunity here to replace one of the last stock apps on people’s phone homescreens. With that could come a huge influx of time spent on Snapchat, which in turn could open up new advertising opportunities. Combined with its recent advancements for marketers, Memories is a meaty question-mark that could make investors salivate if Snapchat wants to IPO soon.

But perhaps the most profound impact of Memories is that you won’t have to interrupt what you’re doing to share it to Snapchat. No more dancing like crazy or joking with friends…then spending three minutes writing a witty caption, choosing the best filters, and decorating with emoji before you post.

Now you can shoot a photo or video, slip your phone back in your pocket, and share it when you have a moment to create a Snapsterpiece. Memories won’t just help you save them, it will keep you in the moment so you don’t miss them in the first place.