Can an app stop you from getting pregnant? In conjunction with daily input from a basal body thermometer, it can indeed. Or so says European startup Natural Cycles, which also bills itself as a fertility tracking service, and is today announcing a $6 million Series A funding round, led by Bonnier Media Growth, the venture arm of the Swedish media business. Existing investors Sunstone and E-ventures also participated in the round. This follows a $1.5 million seed raised last year.

Female-led health-focused startups, such as the likes of Clue and Chiaro, have been grabbing attention and funding in recent years by pioneering smart services that cater specifically to women — sometimes also underlining how male-dominated tech giants are lagging behind the curve in this area.

Natural Cycles, which was founded back in June 2013, is led by a wife and husband physicist duo, Dr. Elina Berglund and Dr. Raoul Scherwitzl. It expanded out of its Nordics home base in October 2014, adding the U.K. to its market roster and now claiming more than 100,000 active users across 161 countries. It’s a subscription-based service, with reported revenues of $2 million in 2015 — its first full year of trading.

The science behind the app is based on the fact that a women’s body temperature rises after ovulation, so if you’re able to accurately track body temperature, algorithmically correcting for fluctuations that might be caused by other factors, such as drinking alcohol, then in theory you’re able to identify when ovulation is occurring — and thus correctly pinpoint a women’s fertile window (coupled with factoring in sperm survival rates).

Although it should be noted that many factors can affect body temperature. And there are doubts about the effectiveness of using basal body temperature for natural family planning. On the outside endorsement front, Natural Cycles notes that Kristina Gemzell, a Swedish researcher in the field of contraception, sits on the company’s advisory board and works with it on conducting clinical studies. Update: In an email to TechCrunch Gemzell confirmed she has been involved in an analysis of the database “showing a real life efficacy” that is in line with the pill but added there is currently “no study with a direct comparison available”. 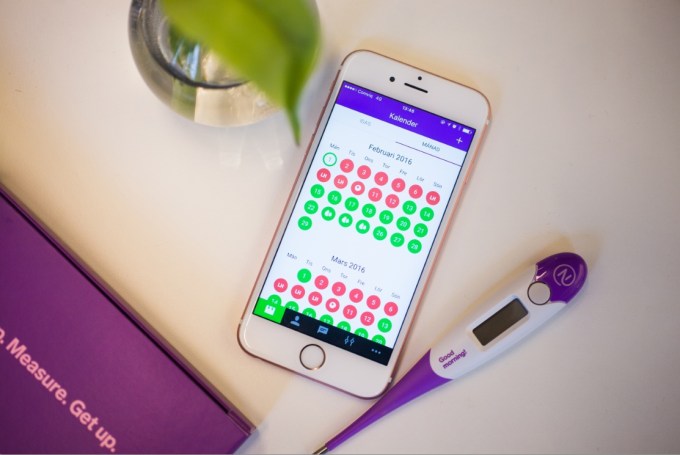 Natural Cycles uses a simple red or green color-code system to inform app users whether there may be a risk of them getting pregnant on a given day if they have unprotected sex, or whether there is lower risk. Users do have to manually input their temperature data. A prior plan to develop a wireless thermometer to simplify that part of the system has so far been put on hold, co-founder Scherwitzl tells TechCrunch, in favor of funding research to quantify accuracy rates.

At this point the team has conducted one large-scale study, involving 4,000 women, to investigate failure rates for the app — which he says pegs the accuracy as about the same as using the contraceptive pill. Using the Pearl Index metric, which is based on typical usage — so accounting for human error — seven out of 100 women using the system would get pregnant versus nine out of 100 using the pill. While on a perfect use basis, where you take human error out of the equation, the study indicated Natural Cycles would have a failure rate of five out of 1,000 women versus three out of 1,000 women for the pill.

Conducting more research to underpin the product is part of the plan for the new funding — including what Scherwitzl dubs a “gold standard” study of usage versus using the contraceptive pill.

“One large study we want to do is… a randomized control study,” he says. “Right now we use women using our product in real life and see how many get pregnant. Now we want to make a randomized control study against the contraceptive pill. So 1,000 women will use our product for one year, 1,000 women will use the pill for a year and when they come to the clinic first they will not know what they will get for a year… It will be very interesting to see how women experience different birth controls.”

The team also intends to perform other clinical studies to investigate factors that can affect fertility.

“It’s very interesting now that we have all this data on fertility. You can really understand what affects fertility. That has been studied in the literature but we have a really large data-set now, very high quality data — so that will be very interesting to just dig into it and see what we find,” adds Scherwitzl.

Simplifying natural contraception via an easy to use app plus digital subscription service in order to widen access to non-pharmaceutical contraception is the core business proposition — and one with a massive potential market size if enough women can be convinced of the method’s reliability. And convinced enough to ditch the pill.

So far Natural Cycles has done especially well in its home market of Sweden, managing to capture four percent of the local contraception market within 18 months, according to Scherwitzl. But their ambition scales far beyond home turf — with the new funding to be funneled into expanding the team and backing a big push in the U.S. market.

“We’re really planning to build a very large company. The vision is really to increase choice in contraception and accelerate time to pregnancy — a world where every pregnancy’s wanted,” says Scherwitzl. “We want to provide the best possible product and services related to that.”

“One of the biggest problems in contraception is the lack of innovation,” he adds, discussing the competitive landscape.

“Pharmaceuticals have retracted their funding from that area, not completely but dramatically — so there’s not many new things in the pipeline… so I think the more that work on it, the better it will be for society. And for women and men to have more to be able to choose from. It’s something you want to decide what fits best for you and not just from a set of three, four, options.

While there are very many digital apps/products focused on fertility, and specifically on serving couples that are trying to get pregnant, Natural Cycles’ early positioning as a contraception app helped the startup stand out in a crowded space. But Scherwitzl notes that many of the women who have used it for contraception have also used it for getting pregnant. So it’s now doing more to emphasize the fertility use case, too.

“We got a lot of natural influx of women using it for getting pregnant and that’s something now that we’ve started to develop further,” he says, claiming use of the app can help women get pregnant faster by telling them when their fertile window is.

“This is is a new study that we’re working on that will come out soon,” he adds.