Today, NASA successfully completed a full-duration qualification ground test of the booster that is designed to lift the most powerful rocket in the world.

This particular test was a cold motor test used to provide data on how the rocket motor operates at the colder end of its accepted propellant temperature range. NASA cooled the motor over the last several weeks to get temperatures down to 40 degrees Fahrenheit.

Fired up! Did you miss today's booster test for our Space Launch System, the world’s most powerful rocket? Watch it now!During the SLS flight the boosters will provide more than 75 percent of the thrust needed to escape the gravitational pull of the Earth, the first step on our journey to Mars. More: http://www.nasa.gov/sls

“Today’s test is the pinnacle of years of hard work by the NASA team, Orbital ATK and commercial partners across the country.” John Honeycutt, SLS Program Manager

Held down in a desert in Promontory, Utah at Orbital ATK Propulsion Systems’ test facilities, the booster remained in place as it was fired for a full two minutes. 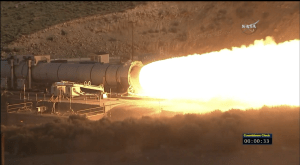 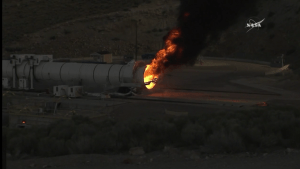 Robotic arm at the end of the booster, extinguishing the flame / Screenshot from NASA live feed

Ultimately, there will be two of these solid rocket boosters on NASA’s Space Launch System (SLS) rocket, which is designed to bring humans to Mars. The boosters themselves were derived from the same solid rocket boosters (SRBs) used to power NASA’s Space Shuttle and can provide 3.6 million pounds of thrust each — about the same amount of thrust of 14 Boeing 747-400s at take-off.

“Seeing this test today, and experiencing the sound and feel of approximately 3.6 million pounds of thrust, helps us appreciate the progress we’re making to advance human exploration and open new frontiers for science and technology missions in deep space.” William Gerstenmaier, associate administrator for the NASA’s Human Exploration and Operations Mission Directorate

In its full configuration, the SRBs (aka the “solids”) will be joined by the SLS core stage, which contains the RS-25 Engines (otherwise known as the “liquids” because they operate with super-cooled liquid hydrogen and liquid oxygen).

Together, the “solids” and the “liquids” will provide the thrust necessary to get the enormous SLS out of the Earth’s gravity well and into outer space. 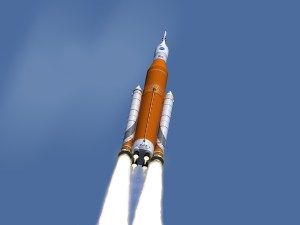 Today marked the second time that NASA conducted a ground test on the SLS booster. Orbital ATK, the prime contractor for the booster, successfully tested a hot version of today’s test back in March, 2015. For this test, the booster was heated over several weeks to get temperatures up to 90 degrees Fahrenheit — the higher end of the propellant temperature range.

For both full-scale fires, data was captured from more than 530 instruments located along the booster. Together, the cold and hot motor tests provide NASA with the range of data for analytical models that can predict how the booster will perform over a range of scenarios.

When the booster is relatively hot, it burns faster and the pressure is higher. If it’s cold, the booster burns slower and operates under a lower pressure. Understanding how this affects the rocket’s performance is critical to ensuring a safe, effective launch for future missions. 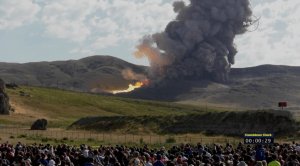 Today’s cold motor fire was the last full-scale test before the first uncrewed flight of SLS. The maiden flight, known as Exploration Mission 1 (EM-1), is tentatively scheduled for September 2018. After that, NASA’s plan is to use the SLS to send humans to an asteroid by 2025 and to Mars by the 2030s.