The Pocket Tripod is repeating its crowdfunding success from a few years ago, creating an updated, universal version of its incredibly popular credit-card-sized tripod that fits in your wallet. Now available for pre-order for Android users and people who like to stick cases on their phones, it’s a tremendously useful piece of kit for smartphone photographers on the move.

For as long as photography has been around, a tripod has been the No. 1 accessory for photographers. With good reason — keeping the camera steady is one of the best things you can do for better, cleaner images. That’s true for any type of camera, including the one on your cell phone — but very few of us would lug around a 15-pound tripod in case we want to take a photo. What if there was a tripod that fits in your wallet? That’s the brainwave delivered by Geometrical Inc.‘s Rambod Radmard.

There’s an excellent reason why the photography industry is shivering in its boots: A tremendous number of photos are taken with smartphones these days, and the trend is showing no signs of slowing down. The explanation is simple: If you’re out and about and you see something cool, are you going to run back home to get your fancy SLR camera, or do you fish your smartphone out of your pocket? I know, I know, it’s a silly question, but it illustrates the point that the best camera is the one you always carry with you. Because of the explosion in smartphones, that means that suddenly there are billions of extra cameras in circulation. Following the same logic, the team behind Pocket Tripod created a tripod that’s small enough to always carry with you.

The original product was launched in 2013, with a rather successful Kickstarter campaign, but it had a few quirks. The Pocket Tripod didn’t fit if you had a case on your phone, and if you had anything other than an Apple device, you were out of luck. Back to the drawing board they went, and the company is back for more with a new Kickstarter campaign for the second generation of the product, which addresses these issues. 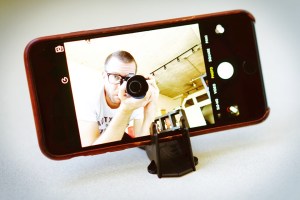 Me, shooting a photo of my phone that’s running the front camera, in a Pocket Tripod. This has to be one of the most self-referential selfies ever taken.

I’ve spent a couple of days with one of the Pocket Tripod prototypes, and It works fantastically well. I’ve taken some great shots using it, but I’m not going to lie: it always leaves me wanting. The product itself is great; well designed, high quality and works exactly as you’d expect. That’s not the problem.

The problem is that I know how good it would have been to have my real tripod with me, with full pan and tilt, and preferably around four or five feet tall. So Pocket Tripod guys; if you could design one of those to fit in my wallet, that’d be sweet. Until then, I’ll keep carrying this one with me, fully with the knowledge that it’ll primarily serve as a reminder that the perfect solution to my problem already exists — in a drawer at home.

Not a big fan of crowdfunding campaigns? Not to worry; hang tight ’till the end of the year and buy one in the shops. If you’re feeling Kickstarter-y, you can pre-order one from the new campaign for another week or so.