Being a teenager is a rough ride at the best of times, and even the most confident of youngsters could do with a bit of a confidence bump. This is the market Shine has in its crosshairs, with an SMS and a brand new Facebook Messenger bot aiming to help teens keep a sense of perspective. 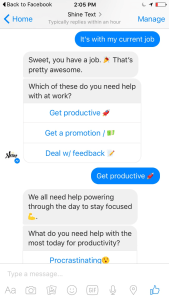 Bringing a touch of mindfulness to the day-to-day communications flow, Shine has created a set of tools to help teenagers feel empowered to deal with the day-to-day highs and lows of navigating the path to adulthood. The SMS and Facebook bot is designed to feel like a friend cheering you on as you move through your day.

The goal with both services is to serve as a regular reminder to keep a sense of perspective and to occasionally take a deep breath as the world whirls on like a tiny tornado around you.

There’s little doubt that the company is tackling a big issue, too, and they’re not alone, either — quite a few companies and organizations are popping up that are aiming to make the lives of millennials and post-millennials a bit easier to handle.

With its SMS service, Shine has been able to reach its target audience very well indeed; since the beta launch in October last year it has exchanged over 2.8 million messages with its users, 88 percent of which are under 35 years of age.

According to the company, well over three-fourths of millennials identify work as one of the biggest stressors in their lives. No wonder, then, that the new Facebook chatbot is especially focused on making that aspect of life just a little bit easier, with advice available at the tap of a button.

“Social Media is often criticized for the role it plays in social comparisons, FOMO, or feelings of self-doubt,” the company’s co-founders say, explaining how they’re turning social media’s negative powers against itself.

Shine launched its service as an SMS service earlier this year, and was founded by Naomi Hirabayashi and Marah Lidey, a millennial co-founding team passionate about diversity in tech based in New York.

The organization points out that it exists to help give positive reinforcement on an ongoing basis; for crisis support, the duo refers to other resources instead, reminding its users that services like  Crisis Text Line (the story of which, incidentally, is a TED talk very worth watching) are better positioned to help in case of an imminent crisis.