If you’ve ever wanted a text message conversation to simply go away, but still wanted to do it gracefully, there’s a new bot that will help do that for you.

Burner, which helps users create temporary phone numbers for various purposes, is today rolling out a new tool called Ghostbot. Whenever you hand out a temporary phone number that’s built through Burner — say, a number for a Craigslist encounter — you can automatically sic the bot on the conversation to automatically respond in such a way that it will try to wave off the person on the other side.

Users can have one or multiple Burner numbers, and they attach Ghostbot to one — which will populate a list of contacts that the user is texting with that Burner number. From there, it’s click-and-go. Whenever a contact that has Ghostbot enabled texts the user, it’ll create a canned non-committal response that will hopefully get the other person to go away based on the context of the text message. And if they don’t go away, worst case scenario, they realize they’re talking to a bot, CEO Greg Cohn said. 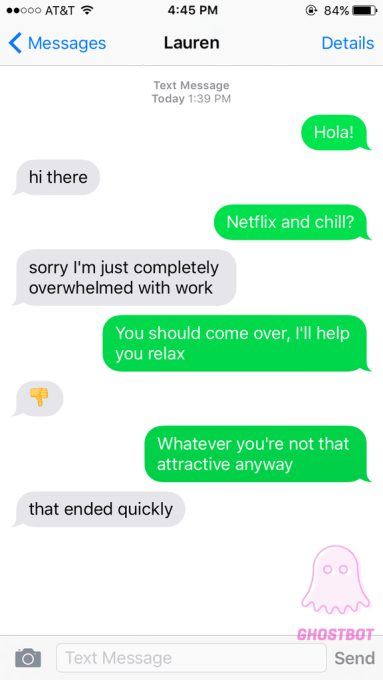 “The idea is to avoid a situation where you don’t want to have a confrontational conversation, but don’t want to go dark on them,” Cohn said. “Part 2 is the actual responses — various but scripted — and it’s not the case that we expect this bot to pass the turing test and fool the world into thinking its person. The general idea is this will kind of handle a situation that’s casual and light and a cooling off period, but of course it’s possible to trip the bot up. The general idea is at some point, by the time people clue in it might be a bot, things have cooled off and the person has moved on.”

Burner worked with a third-party developer to build the bot, which uses a mix of natural language processing and some creative responses to, at a random interval, respond to a text message with a pretty generic “I’m busy” of sorts answer. Since one of the primary use cases of Burner was for dating purposes, Cohn said, it made sense to try to build a tool that would help suit that purpose.

The Burner team basically set out to build a use case that would highlight the service’s capability: generating a temporary situational phone number for users. For example, defining a temporary phone number for when you are driving to accept phone calls that evaporates once the drive is over. Ghostbot is essentially something similar, but in practice, and a lot more entertaining.

Again, this is just a use case, but serves as a way to essentially market Burner as a potential tool for developers to integrate. Burner already has integrations with services like Slack and Dropbox, where users can create auto-responders or save photos, for example, on those services with a Burner number. With more tools looking to integrate into text messaging — basically part of the reason that an entire company like Twilio worth nearly $1 billion go public — Burner offers a unique opportunity.

Part of that opportunity is sitting as a layer on top of a phone’s core capabilities without having to wait for a carrier to introduce new features. With Burner, users can start tying unique services — like Ghostbot — to phone numbers that interact with technology through text messaging.

“Opening up phone numbers in the way we’re opening up creates the possibilities of all kinds of capabilities like that,” Cohn said. “You can imagine a future that a phone number knows you’re driving a car or someone sending you something inappropriate.”

It also offers a unique look into the world of bot development. And it really shows off what will probably be the first of many use cases that integrate bots into text messaging — especially with the explosion of activity in bot development on platforms like Facebook Messenger and Slack. Developers could easily try to build a similar tool using Twilio, but it might be less effort than re-inventing the wheel to simply tap into Burner, which is already developed as a consumer-centric experience.

But for a service like this, there are certainly challenges. The natural one is preventing illicit activity — much in the same way traditional burner cell phones have been used. There are two parts to that story, Cohn said: protecting user privacy (which is basically a core use case of Burner) and establishing a general understanding for its user base that it’s not a place for bad actors. Any communication service will inevitably attract them, but the tricky part is figuring out how to address that problem.

There are also multiple burner services available like Swytch and Hushed. It’s not a particularly novel idea, given that it goes all the way back to the idea of using burner cellphones to protect identity and information. The execution is the key part here. Burner hopes that by proving itself out as a powerful tool for developers to build unique experiences around phone numbers — with tools like Ghostbot — that it’ll find a way to take hold on the market.