Article updated to address how Thriva is different to U.S.-based Theranos.

When the ‘quantified self’ involves stabbing your little finger with a sharp object and collecting the resulting blood, it feels like the real deal.

Enter Seedcamp-backed Thriva, a new London-startup that offers a home finger-prick blood test that lets you track a range of internal blood markers associated with good or bad health. Out of the gate, this includes cholesterol levels and tests for liver and kidney function.

“Everyone knows prevention is better than cure. In reality though, getting access to some of the most impactful and motivating information there is — data about how you’re really doing on the inside — is broken,” Thriva co-founder and CEO Hamish Grierson tells me.

“The NHS is an incredible institution and is ‘free’ but because it’s so challenging to access, people wait until they’re sick before lifting the lid on their bodies. The consequence? We’re locked in a reactive health paradigm. Until now, people haven’t been able to access the tools that enable them to take control; to own and to make better decisions about their health”.

The test I was sent prior to public launch seemed straight forward enough. The home finger-prick kit comes with a set of clear instructions and several spare lancets in case you have trouble drawing enough blood. However, as an ex-gigging musician and now living the lifestyle of a tech journalist, I wasn’t about to let a new fangled-startup get an insight into my inner bodily health (or lack thereof), so I roped my housemate into trying out Thriva instead. He bled a little too easy. I felt kinda bad.

Once you’ve taken the home test, you mail the blood sample back to Thriva’s partner lab. The results are then analysed and uploaded to the Thriva platform where you receive a bespoke report and recommendations created by a healthcare professional that explain what lifestyle changes you may need to make to improve your health.

Or, in a worse case scenario, you’re advised to seek medical advice from a doctor. The example report I saw was pretty detailed but not overwhelming, and with help tips provided inline to enable you to make better sense of the available data. 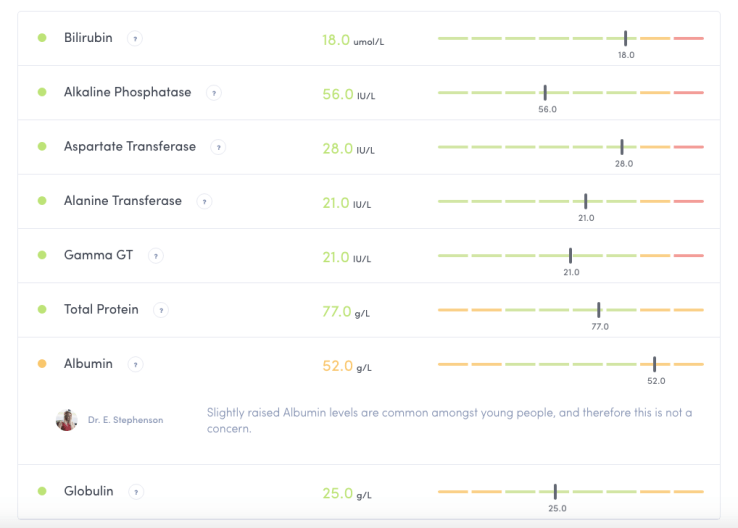 “We’re making it super easy for anyone to quickly, conveniently and accurately find out what’s going on inside their bodies,” explains Grierson. “In the coming months, we’ll be launching a range of tests designed to service very specific customer needs. Our first test is designed to help our customers understand what impact their lifestyle is having on their body which is why it focuses on three specific areas: cholesterol levels, kidney function and liver function”.

It’s what Grierson calls a “reactive” health paradigm that he and his co-founders, which include a practicing GP, want to challenge. For those that can afford it, the test costs £49.99 and you’re encouraged to schedule follow up Thriva tests, presumably once you’ve made the advised lifestyle changes or to track any changes, good or bad. Regardless of cost, which might otherwise be covered by the NHS, the home kit is far more convenient than queuing up at blood clinic.

Future planned Thriva tests will focus on energy levels, vitamin D deficiency and fertility. People suffering with symptoms related to bloating or possible IBS/IBD will also be a potential target, which is a huge market where their is a tendency already to self-diagnose.

“There are a range of customer segments we’re targeting here from hard working City folks worried about their health, to men and women who’ve hit an age milestone and have become more acutely conscious of their health and don’t want their bodies to let them down, to tech enthusiasts and quantified self enthusiasts,” says the Thriva CEO.

Noteworthy, the startup is also about to launch a corporate product for employers that want to offer employees something different, and are looking for something more affordable than many of the current employee health benefit products available.

“We’re also developing a range of relevant services such as access to specific expert be that dieticians, personal trainers or GPs,” adds Grierson.

In addition to Seedcamp, Thriva is backed by a number of angel investors, including Ricky Knox and Michael Kent (founders of Azimo), Will Neale (founder of Grabyo, Fonix and early-stage investor in Property Partner) and Peter Jackson (former CEO of Travelex and current Head of Innovation at Santander). That list reflects the fintech background of Grierson, and two of Thriva’s other co-founders, Tom Livesey and Eliot Brooks, having previously worked at Travelex, Droplet Payments, and Tandem Bank.

Update: A number of readers have asked how Thriva compares to U.S.-based Theranos, as, on the surface, both companies employ a finger-prick blood test. However, the two companies tests are in fact very different. In short, unlike Theranos’ pitch, Thriva isn’t using its own tech (or claiming to have invented any new technology) to collect or process the tests but relies on a very bog standard blood test and the results are processed by a large third-party lab on-site.

In the Thriva CEO’s own words:

Unlike Theranos, we collect more than a single drop of blood because it requires more blood to run the tests we run at the level of accuracy we demand.

The partner lab we work with is the largest private path lab in the UK and count the NHS as their largest client. They process 40,000 tests per day.