ROOBO, a fast-growing hardware and AI startup headquartered in Beijing, today unveiled a prototype of its newest product, a “pet robot” called Domgy.

For the unfamiliar, ROOBO is the company behind Pudding, a voice-controlled, educational robot for kids. Pudding is used to teach kids vocabulary, geography, jokes and more. The company also makes the Idealens virtual reality headset, Skyseries drone and Runbone earbuds.

Since its founding in 2014, ROOBO has grown to 300 employees, with 7 worldwide offices, including one in Seattle. The company previously raised a Series A round of venture funding, but declined to say how much capital they raised, who their investors are, or how much revenue they have generated to-date.

According to ROOBO’s Marketing Director Anthony Chen, the company’s ambitious new product Domgy is meant to be a “family friend that makes life easier and more fun at home.”

The name hints at a canine form factor, but Domgy isn’t really a new twist on the Aibo. (Remember Sony’s robot dogs?)

Instead, Domgy rolls around, rather than walking on four feet. It can navigate normal obstacles in a home, or make its way down a shallow step or two but it’s not meant to navigate rugged or steep terrain. Usefully, Domgy goes back to its charging station automatically when its battery is getting low.

A round, touchscreen face features Domgy’s large, animated eyes and serves as an access point to a Domgy apps menu and other settings. The device is also smartphone-controllable.

Domgy’s pupils turn to hearts to show love and happiness, and it giggles. It can also growl, whine or respond with a good emotional range, for example if it’s jostled or yelled at. 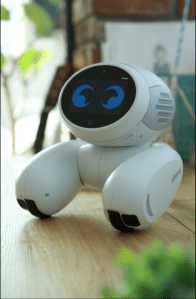 While ROOBO created the artificial intelligence that powers Domgy, the device and its operating system was originally designed by Innovative Play Lab in Korea. According to ROOBO executives, IPL will continue its work on the software development kit and operating system for Domgy, while ROOBO will manufacture the pet robots and develop further AI and content for them.

ROOBO is also an investor in IPL, which was earlier funded by the Korean government.

A 5M camera in Dogmy’s head can also serve as a monitor of sorts, alerting family members when it encounters a stranger in the house, which makes it a “good guard,” Chen said.

ROOBO intends to offer pre-orders of Domgy via crowdfunding sites in China, including Tmall and Jing Dong, and Indiegogo in the U.S. aiming to ship to early backers by the end of 2016.

Users can determine if they want Domgy’s voice to be male or female. They can also command Dogmy to wake or go into sleep mode, play a song, tell a story, or turn compatible, smart home devices on and off.

The company is partnering with Disney English and others for content, and makers of voice recognition systems, Ke Da Xun Fei Group, to enable different features on Domgy.

A price for the pet robot has not yet been determined. But the company intends to keep the cost of hardware low, so average households in the U.S. and other major markets can easily afford them, Chen said.

The robot gets about 4 to 6 hours of use out of one full charge, and can travel at a top speed of 5 kilometers per hour, Chen said. “It’s not a race car and it won’t be able to catch up to your other pets.”

However, Domgy may be able to entertain a dog or cat while their humans are away, and can recognize them, by face, as family members.

Update: This post has been updated with new information about the involvement of Korea-based Innovative Play Lab in the creation of the Domgy with ROOBO, and how the companies intend to work together in the future.