For the second time in history, scientists have directly detected gravitational waves. And just like that, a new era of astronomy is underway.

Like the first gravitational wave detected, scientists believe that the signal was created by the collision of two black holes, albeit a completely different binary black hole system than the first.

Both signals were detected at the Laser Interferometer Gravitational-Wave Observatory (LIGO). The LIGO team is made up of researchers from MIT and Caltech who led the design and construction and work together to operate the facility.

After ruling out any other possible source for the detected ripple, the LIGO team determined that the wave matched a single scenario among a bank of hundreds of thousands of known waveform possibilities: the collision of two black holes colliding at half the speed of light, 1.4 billion light years away.

“The first event was so beautiful that we almost couldn’t believe it. Now, the fact of having seen another gravitational wave proves that indeed we are observing a population of binary black holes in the universe. We know we’ll see many of these frequently enough to make interesting science out of them.” Salvatore Vitale, MIT research scientist and LIGO team member

Gravitational waves are ripples in the fabric of space and time throughout the universe and were theorized by Albert Einstein over 100 years ago. They’re caused by extreme, cataclysmic events that occur in outer space — like two black holes colliding into each other. 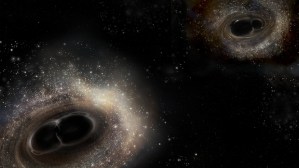 Directly detecting gravitational waves is a huge deal, because by doing so scientists are confirming Einstein’s theory of general relativity.

With general relativity, Einstein explained the concept of gravity in an entirely new way. He theorized that massive objects in the universe distort the fabric of spacetime, which is felt as gravity.

This is why larger, more massive objects in the universe garner a larger gravitational pull.

Einstein’s theory better explained scientists’ observations of the universe, so it became the prevailing theory for gravity.

Until recently, scientists lacked the necessary tools to detect these ripples through the universe. That all changed with the creation of LIGO. 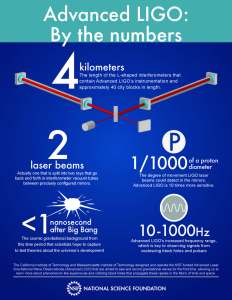 LIGO is an enormous facility that took more than $570 million and 40 years to design and develop. To date, it’s the largest scientific investment the National Science Foundation has ever made.

The concept is fairly simple. Gravitational waves should stretch space in one direction and compress space in the other. If scientists could find an extremely accurate and sensitive way to measure space in an X-Y plane on the Earth, they could directly detect a gravitational wave.

It turns out, LIGO was that extremely accurate, sensitive tool.

The facility has two main locations: one in Louisiana and the other in Washington. Each facility has an L-shaped tunnel with 4 kilometer (2.5 mile) legs perpendicular to one another.

Laser beams are pulsed in the perpendicular legs and then LIGO scientists measure the time it takes for the laser beam to hit one end of a tunnel leg and return to its starting point. 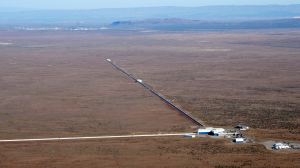 Because we know the speed of light, a precise measurement for each tunnel leg’s length can be taken. With this information, scientists could determine if space was being compressed or stretched in either direction.

Employing this strategy, LIGO made history with the first direct detection of gravitational waves in February of this year. The facility was able to detect a stretch the size of a fraction of a proton’s diameter in the LIGO legs.

After announcing their findings, LIGO laboratory executive director David Reitze said, “This was a scientific moon shot. And we did it — we landed on the moon.”

Now that same team has detected a second, completely separate gravitational wave that stretched the LIGO legs an even smaller amount than the first wave.

LIGO is allowing scientists to view the universe through an entirely new lens. By studying gravitational waves, researchers can learn more about the frequency of black holes and how they merge.

With LIGO, scientists have opened up an entirely new era of astronomy.

“As you can imagine, for most of us, these detections have had a very strong impact on our lives, because we’d been waiting for this for a very long time. It’s been an incredible experience, the last few months.” Lisa Barsotti, principal research scientist at MIT and member of LIGO team