Snapchat is ready to make the big bucks that could let it go public thanks to a slew of important updates to its ads offering. They’ll give advertisers the spotlight, buying flexibility, return on investment opportunities and measurement to throw huge budgets at Snapchat’s 150 million daily users.

Together, these announcements turn Snapchat from a thriving social network experimenting with monetization into an advertising powerhouse. But rather than just joining the pack of big league ad platforms, Snapchat has leapfrogged them in marketing innovation.

Snapchat is pioneering what I call “Sponsored Creation Tools,” which look like the next big thing in advertising. People have grown numb to traditional banner ads, and have even learned to skim past native ads built into the feeds of apps like Facebook. Meanwhile, ad blockers weed out a lot of traditional marketing. 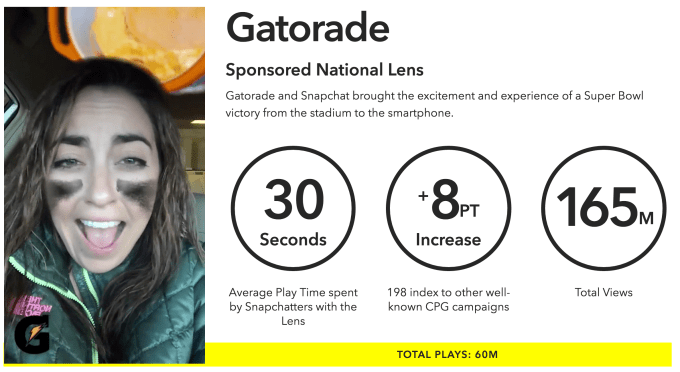 But Snapchat’s sponsored creation tools — facial-recognition animated selfie lenses and geofilters — employ you to create ads that you then show to friends. Whether it’s turning your face into a Taco Bell taco or simply layering the name of the business you’re visiting over your photo taken there, the ads slip by people’s defenses.

That’s why Taco Bell’s recent national lens ad campaign racked up 224 million views, and Gatorade’s scored 165 million. The average Snapchatter spends 20 seconds playing with an animated lens before sending their snap, creating a deep connection between the creator and the brand that’s much more interactive than simply watching a pre-roll video ad.

And since the sponsors are helping people create interesting content that entertains their friends, there’s a vivid sense of gratitude towards the brand that’s the polar opposite to how people typically feel after being forced to sit through an ad.

Why Snapchat will be hard to disrupt

Combining its cool, reach and depth of engagement with the tools for marketers to leverage the daily addiction of 150 million people could let Snapchat challenge Google, Facebook, TV and everyone else for ad dollars.

The launch of app install ads could be especially lucrative, as Snapchat is one of the most used apps in the world, while others struggle to get downloaded from the crowded stores. Plus, Snapchat could follow-up Stories from friends that include a Sponsored Lens with an inserted Snap Ad for that same brand before the next friend’s story plays.

Watch a friend play with the new Iron Man Sponsored Lens, and then you might see an ad where you can swipe up to buy tickets to the movie. Snapchat will just have to remain vigilant that ads don’t feel smarmy and out of place, and that it doesn’t show so many ads that it feels uncomfortable.

Snapchat’s quarterly revenue, according to leaked documents attained by TechCrunch

Snapchat is running a playbook quite similar to what Facebook was doing circa 2011, building out an Ads API and platform of adtech developers to unlock more spending on its revamped selection of ad formats. It’s got the man to do it, too.

This year Snapchat hired away Sriram Krishnan, the head of Facebook’s ad network that helped lead it to earn $5.38 billion in revenue in Q1 2016.

Snapchat earned $59 million in revenue in 2015 with plans to earn $250 million to $350 million in 2016, according to leaked documents reported by TechCrunch last month. Even with the $1.8 billion Series F it just raised bringing it to $2.63 billion in total, that seemed like a steep ramp up. But with today’s announcements, those revenue projections don’t seem as far-fetched.

Sponsored creation tools. Crowd-distributed marketing. Inescapable ad formats. And the business back-end to power it all.

This is what Snapchat needed to open the doors to an IPO.