Nameless.tv is bringing some of the communal feeling of watching regular TV — you know, the sense that people are watching along with you – to the experience of streaming online videos.

The New York-based startup was previously known as NYC.TV, and it was supposed to recapture the “anything goes” spirit of public access television by funding local video creators. After NYC.TV ran a successful Kickstarter campaign last year and used that money to fund some New York-centric videos as promised, Rahma said the audience interest just wasn’t high enough.

So now the team is working on Nameless.tv — it’s also inspired by the traditional TV-watching experience, but in a different way. The site aggregates videos from other platforms and lines them up as channels with names like Strangely Satisfying, Simpsonwave and Fashion Mag.

Everyone watching a channel is watching the exact same video as everyone else, and they can also chat in real-time with the other viewers. It’s like watching an episode of, say, Game of Thrones as it airs and talking about the developments as they happen — not on separate platform like Twitter, but alongside the video itself.

But I wondered: Is this channel-based model any different from old-fashioned TV? Isn’t it kind of a step backward as online videos moves to on-demand viewing? 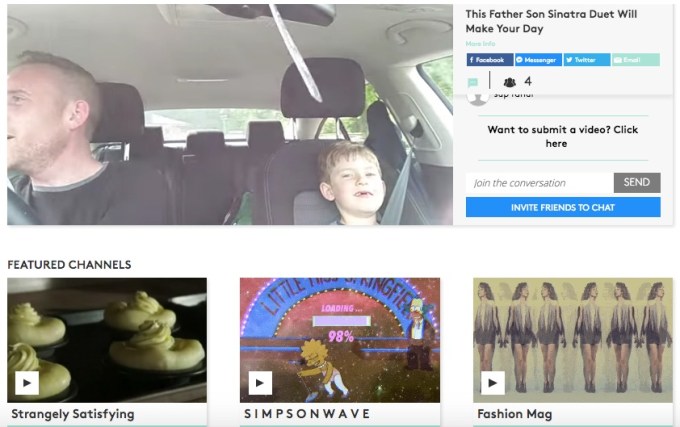 In other words, in his view, what differentiates Nameless.tv from regular TV is the fact that “the content is 100 percent different.” And compared to finding videos on, say, your Facebook feed, the experience is “more of a concentrated approach … without everything constantly distracting you.”

That said, if you do get tired of waiting for a particular video, you can just jump ahead and watch it on-demand as you could on any other site.

Rahma said Nameless.tv is currently in beta testing, and while it’s web-only for now, there are also plans to develop a mobile app in the coming months. The company says it has already attracted 250,000 viewers, who spend an average of seven minutes per visit on the site.

“We called the company Nameless to let the content speak for itself,” Rahma added.