Hiri is the latest startup trying to fix email. Specifically, the Dublin-based company is targeting workplace email with an array of features that aim to nudge users to change their email behaviour for the better. For it isn’t email that is necessarily broken but the way we all use and abuse it.

Starting with the premise that thoughtless and un-targeted emails fill a very high percentage of your work email inbox, Hiri’s headline feature is the ability for recipients to rate each email they receive, which serves as the basis for your own email score or email analytics.

You’ve given a weekly score based on feedback received relating to clarity, brevity, and tone, and the software’s rating of your overall email behaviour. 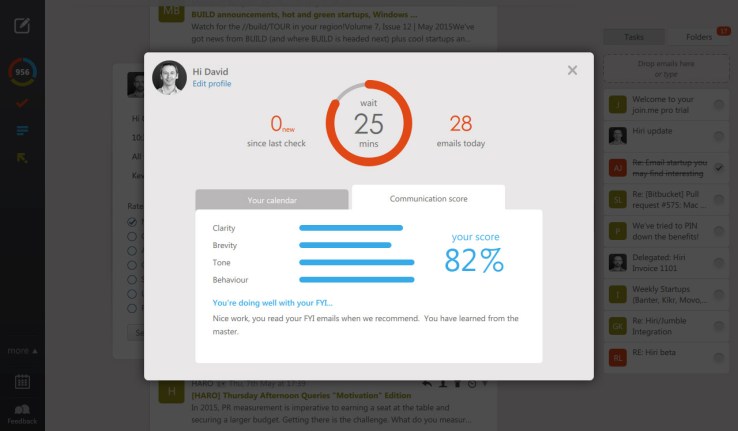 The idea, the startup’s CEO and co-founder Kevin Kavanagh told me during a call last week, is to get employees thinking about how they currently use email and to begin to change their behaviour for the better. The weekly score also ensures employees don’t return to bad email habits.

Citing research from the UK’s University of Loughborough that found the average employee spends 2.5 hours a day on their work email and checks its 96 times a day, which equates to every five minutes, Kavanagh says that most employees would benefit greatly from checking email less.

That’s because not only is email a time sinker in itself but the time it takes to recover from having your flow interrupted also adds up. This is probably most extreme for tasks where intense concentration and getting ‘in the zone’ is paramount, such as coding.

Hiri’s second and blunter tool prevents you checking email too often. You are made to wait 30 minutes between inbox visits. 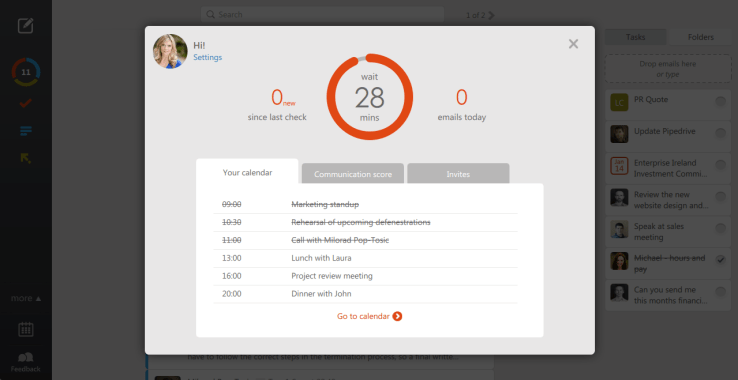 However, my favourite feature of Hiri is the way it asks you to explicitly separate emails you send into two groups. Ones that are just an FYI, and ones that require further action. It’s a very simple idea but one that I think could be incredibly effective.

An unspoken rule of the workplace is that people routinely loop colleagues and superiors into emails so that if the shit hits the fan they can always share or evade responsibility. That’s created an explosion in email, making it easy to miss those that are task-related. Hiri’s simple categorisation feature, which actually renames the CC field, aims to fix this.

Emails you send with Hiri can be labeled as requiring an action, which automatically creates a task for the main recipient(s), a question, or as an FYI. 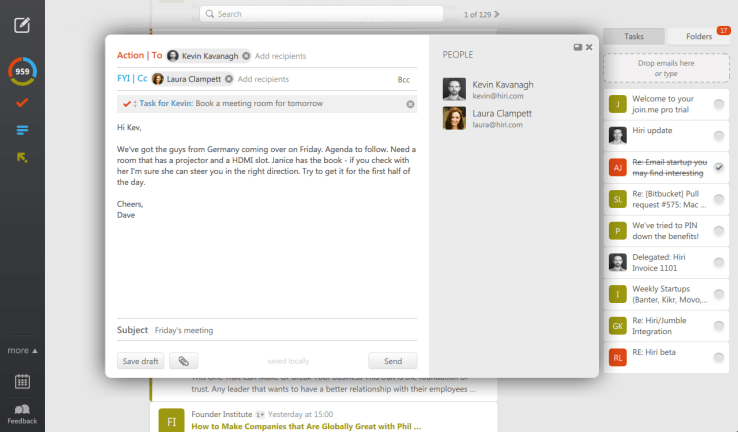 You can also drag and drop any email you receive into your task list. And when composing an email you are asked to write a subject line last. The thinking here is that writing a subject line is easier and makes more sense after you’ve actually written what you wanted to say in the body of the email.

Of course, the startup’s biggest challenge is going to be penetrating the enterprise, since Hiri needs to be installed right across the workplace for it to be truly useful. That’s something Kavanagh concedes but says the company is tackling on three fronts.

Firstly, Hiri is essentially an email client, compatible with MS Exchange and MS Office 365. In other words, it doesn’t replace a company’s existing email infrastructure.

Secondly, the startup has developed a neat Outlook plugin that measures the amount of time that employees spend on email. The idea is that a company can install this before adopting Hiri to see how bad the problem is first. The plugin also captures the number of times that employees switch from other applications to check their mail.

Lastly, the modestly funded Hiri has some decent backers who no doubt can help open doors in the enterprise. They include a Global Director of Facebook and an EMEA Director of LinkedIn. And most recently, the startup picked up a $1 million seed round from Delta Partners, ACT Venture Capital, and Enterprise Ireland. This brings total funding to $1.6 million.