Purchasing a lottery ticket is usually a simple thing. Maybe too simple. But holding onto tickets long enough to check the numbers and redeem any winners requires more effort than many would prefer.

That’s where AutoLotto comes in. The startup has created a mobile app that lets users buy, play and redeem lottery tickets all on their smartphones.

More than 166,000 users have signed up on a waiting list to get the app. And today, AutoLotto finally went live. It is now available on the Apple App store. Initially, only users based in New Hampshire can buy tickets with it. The company gives users a first ticket for free.

Not without controversy, lotteries represent a $70 billion industry in the U.S. alone. Powerball, Mega Millions and state lotteries are everywhere. So why not launch nationally?

The company’s cofounders Matt Clemenson and Tony DiMatteo explained that because lotteries are highly regulated, in each market where it intends to do business, AutoLotto aims to work with state lottery commissions and lottery directors, offices of the governor and attorney general, and other relevant legislators before going live.

DiMatteo said, “We’re not here to ‘disrupt’ the industry. We seek formal acknowledgement that we are not in conflict with existing laws before we operate. We provide a service that helps state lottos and retailers, and people who enjoy playing.” 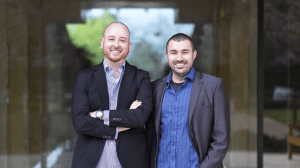 To stay in compliance with lottery laws, AutoLotto also has to operate physical offices in every state where its users buy tickets.

In these small, tightly secured offices, AutoLotto prints lottery tickets, signs them and records all the relevant data about them so it can later redeem winners and pay out user accounts, as well as automatically  notify users if they have winning numbers.

According to the company, each ticket is insured, so even if AutoLotto offices were robbed or destroyed in a natural disaster, customers with winning numbers would be paid.

The cofounders said they wanted to launch in New Hampshire symbolically, because it is the birthplace of the lottery.

For now, AutoLotto allows users to buy one ticket per Powerball lottery draw, using quick pick numbers only. Eventually, users will be able to buy up to 20 tickets per draw, and pick their lucky numbers.

AutoLotto also intends to add group buying features to its app, letting friends pool funds to buy tickets together, and divvying up the winnings automatically based on each player’s contributions to the pool.

AutoLotto is a graduate of the 500 Startups accelerator and has raised $2.4 million in seed funding.

The company also operates the Powerball, Mega Millions and State Lottery Results app, which has more than 40,000 users today. That app will eventually be rolled together with AutoLotto’s ticket-buying app.