Berlin-based eSports startup Dojo Madness is on a mission to help gamers level up. It does this via a mobile app, initially targeting League of Legends, that essentially turns your phone into an eSports coach, offering tips on strategy before and during gameplay, and analysis afterwards based on data culled from your in-game performance.

To further develop its eSports coaching technology, which Dojo Madness co-founder and CEO Jens Hilgers tells me utilises machine learning coupled with huge amounts of in-play data, the company has raised a $4.5M in Series A funding. The round was led by March Capital Partners, with Investment Bank of Berlin (IBB) and existing investors, London Venture Partners and DN Capital, also participating.

Hilgers, who describes himself as an eSports veteran, including previously founding eSports brand Turtle Entertainment back in 2000, says that Dojo Madness is partially founded on the premise that a ‘second screen’ in the form of your mobile phone is the perfect way to receive eSports coaching. Typically gamers consume tips on the same computer monitor as the game itself, usually via a web browser with several open tabs, resulting in the unwanted distraction of having to switch back and forth. A mobile-first solution solves this problem. 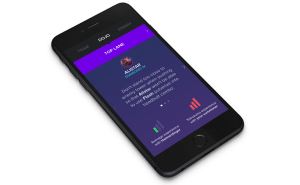 But his company is also betting big on big data and the continual rise of eSports itself. Regards the former, I’m told that games like League of Legends offer open APIs that enable eSports companies to suck in gameplay data. And although API limits means this doesn’t quite happen in realtime, coupled with its own machine learning and algorithms, Dojo Madness is able to provide some in-play guidance — though not enough to ‘cheat’ the game, Hilgers stresses — as well a more comprehensive coaching debrief afterwards.

That value proposition has already seen Dojo Madness’ app LOLSumo become the top rated app on both the iOS App Store and Google Play for League of Legends, says the startup. This translates into 500,000 downloads, delivering coaching to 70,000 daily active users, since launch last September.

Hilgers also believes his company has only scratched the surface, citing figures that suggest League of Legends is the world’s most popular game with over 67 million people playing each month. Meanwhile, eSports as a whole is estimated by market tracking firm NewZoo to be worth $463 million in 2016, up 43 percent from last year. And by 2019, the industry is expected to cross the $1 billion mark.