This appears to be similar to what Google Now can do already, but it appears to be an upgraded version of it. You can ask a question for an answer, and follow up with multiple questions, with Google picking the conversation out and returning the right answer. The service is integrated in its new conversational user interface products: Google Assistant is also built into Allo, its new independent chat bot app, as well as Google Home, its Amazon Echo competitor.

“Think of the assistant, we think of it as a conversational assistant, we want users to have an ongoing two-way dialog,” CEO Sundar Pichai said.

Google Assistant also appears to extend to chats. Users can make queries, and Google Assistant should be able to distinguish each question and return a correct answer. It’s basically Google Now as a really smart chat bot, it would seem. That’s going to be an important avenue for Google, as services turn their eyes to more conversational user interfaces and AI-powered concierge services.

Google Assistant appears to be more of a direct competitor to Alexa and Siri, as well as virtual assistants like Hound. It could signal that Google is getting more and more serious about branding itself as a virtual assistant that can return anything and everything that users need when they are searching for an answer.

Here’s an example use case: a Google Assistant user can ask Google — through chat or voice — who the director of a film like Gravity is. They could then follow up with a question, such as “what other movies has he or she directed,” and Google Assistant should be able to return an answer. Google Assistant can also execute certain tasks, like changing reservation times or setting calendar reminders. 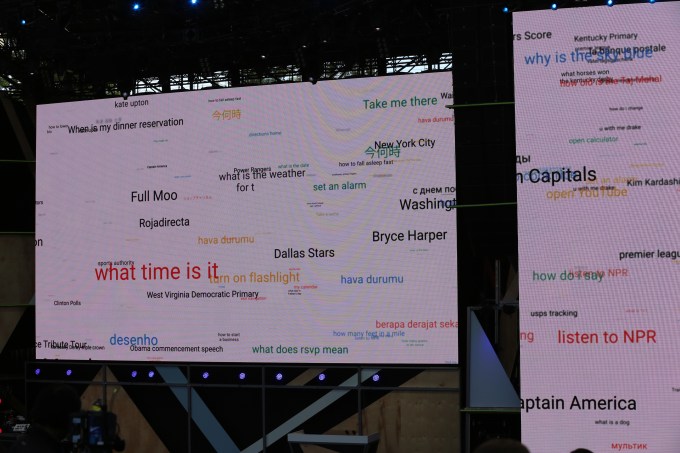 While this seems like it might just be an upgrade to Google Now, this is still a significant move for Google. Google wants to extend its search functions across all kinds of devices and interfaces, whether that’s a conversational user interface similar to Facebook’s messenger bots, a voice interface like Alexa, or standard search queries through Google’s traditional search engine.

“Think of the assistant of an ambient experience that extends across devices,” Pichai said. “Computing evolving beyond phones.”

The big question is whether Google is late to the game on this one. Hound unveiled its virtual assistant — which is very impressive — and Facebook is gunning for its own virtual assistant application, as well as building a developer platform for other aspects of virtual assistants. Google’s play is that it can leverage its powerful AI tools and all the data it’s collected over the years to build a superior virtual assistant. Google also has name recognition going for it.

While Google — and other search interfaces — extend to new devices, Google is also going to have to find new ways to monetize it. Google’s “cost-per-click,” essentially the value of each advertisement, has been dropping consistently for the past years. The company has tried to make up for it with more queries on mobile devices, but it’s still going to have to build new advertising products to continue to grow its business.

Google today also unveiled Google Home, a competitor to Alexa that serves as an ambient voice-recognition interface for Google Assistant. As Google continues to refine Google Assistant, it’s going to make sure it continues to extend its search products across any and all new interfaces in order to head off competition from individually focused search products like Amazon — searching for products — or Facebook — searching for people.