With Uber’s incredibly deep pockets, aggressive tactics and seemingly unstoppable growth, it’s unsurprising that we are beginning to witness difficult times for other startups playing in the taxi and private hire vehicle booking space.

Case in point is Minicabster, the UK ‘minicab’ price comparison and booking app that had raised £2 million in funding since being founded in 2011. TechCrunch understands that the startup entered administration last month — a voluntary process in the UK when a company has incurred debt that it is unlikely to be able to service.

According to a regulatory filing, administrators were appointed at the end of February, charged with finding a buyer for some or all of Minicabster’s assets. And, in the last day or so, that’s exactly what appears to have happened.

TechCrunch has learned that a company called Transport Innovation, which operates a taxi freephone calling service that you typically find placed in UK supermarkets, has purchased some of the startup’s assets, although it’s not clear specifically what these entail and whether or not they include Minicabster’s user base and contracts with cab firms or its technology and IP alone. 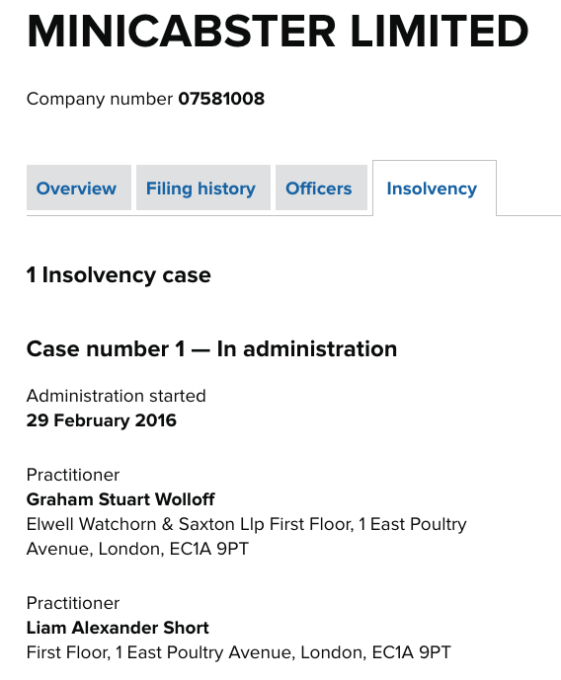 Confirming the acquisition, Paul Murray, CEO of Transport Innovation, would say only that the company has bought the “technical assets” of Minicabster not the company itself, declining to provide any further financial details or otherwise. “We are considering our strategic options,” he wrote in an email when I asked why Transport Innovation has purchased some of the startup’s assets.

(Update: I’m hearing that the winning bid for Minicabster’s assets was around £45,000 — so certainly a fire sale if we are to presume that included the startup’s customer base. I also understand that the administrators talked to just about everybody in the minicab booking space, including Taxicode, who were keen on a purchase, and Karhoo, who declined, according to sources.)

Meanwhile, Minicabster company director Irshad Khan confirmed that the troubled company is in administration and that a buyer of sorts has been found. “Minicabster was part of a sale process, which completed recently,” he told TechCrunch in a statement, adding that the minicab market is becoming “exceedingly tough with the increased costs towards customer acquisition” and the challenges faced by minicab operators in retaining quality drivers.

I understand the latter is a direct reference to the extremely aggressive tactics and resulting growth of Uber and specifically the high rates it pays at weekends and other periods of high demand when surge pricing kicks in. I’m told that it’s not uncommon for minicab drivers to work for the types of minicab firms listed on apps like Minicabster Monday to Thursday and then to move over to Uber Friday night to Sunday where they can make a lot more cash. This creates a real problem maintaining service levels on competing taxi apps as demand outstrips supply.

(Not the same but related perhaps, black taxi app Gett recently announced its intent to acquire a taxi firm of its own in the form of Radio Taxis, presumably to mitigate any future supply-side problem.)

“Going forward, I see minicab operators and other minicab apps facing testing times as Uber spends more to gain market share regardless of the CPA/LTV making economical sense,” adds Khan, who recently launched coach booking app CoachScanner. The coach market, of course, is one yet to be touched by Uber.