Today Facebook launches its full assault on YouTube with a dedicated hub for watching Live and recorded videos in its mobile app. A Video tab is taking over Messenger’s prime, center spot in the navigation bar at the bottom of the screen, turning Facebook into a destination for discovering videos categorized by topic beyond stumbling across them in the feed. 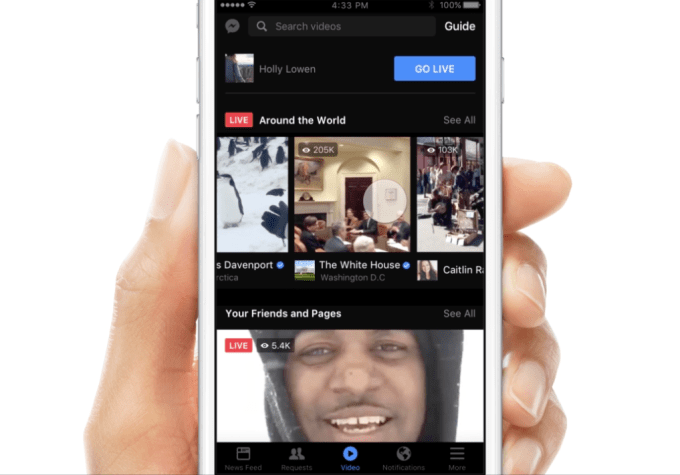 The Video hub heavily features Facebook’s Live broadcasts, and will roll out on iOS and Android in the coming weeks alongside a slew of Live upgrades including:

The upgrades leapfrog Facebook Live’s competitor Periscope, which is owned by Twitter. They make Live videos simpler to create and keep interesting, more fun to watch in the moment or later, and easier to discover while they’re still Live, which Facebook says stimulates 10X more comments.

Live isn’t a foreign product bolted on, but one that’s “leveraging a lot of core fundamentals” of the social network, says Facebook’s Product Management Director for video Fidji Simo. Facebook is often criticized for perpetuating success theater, encouraging people to only share the polished highlights of their lives. But Live is raw, sometimes messy or boring, and truly authentic.

Yet the most telling change is that Facebook was willing to relegate the oft-used shortcut for Messenger to the hard-to-reach top left corner of the screen to highlight the Video hub instead. Facebook tested a Video destination this summer, but it was relegated to a buried bookmark in the More tab.

Now front and center, the redesigned tab lets users swipe horizontally through a stack of categories including “Live Around The World”, “Your Friends And Pages”, and “Recorded Live”. There’s also a Guide sorted by topics like “U.S. News”, “Home & Garden”, or “TV & Movies”.

The depth of and spotlight on the hub proves that Facebook sees video as the future of communication, time spent on its app, and how it will make money.

No Lights, Your Camera, Action

Facebook began testing Live video with public figures last summer and rolled it out to everyone in December. Now average users, celebrities, and news outlets are using it to reveal what’s going on around them. Viewers can leave comments that broadcasters can see and respond to. And unlike Periscope, Facebook Live videos can be permanently saved for replaying instead of disappearing after 24 hours.

But since Periscope launched first in March 2015 and has a more distinctive name, it’s what’s become synonymous with real-time mobile video broadcasting. Periscope hit 200 million broadcasts last month, with 100 million since January. Facebook is fighting to be where the best broadcasts and the most viewers watch, which is certainly possible considering how popular it already is. 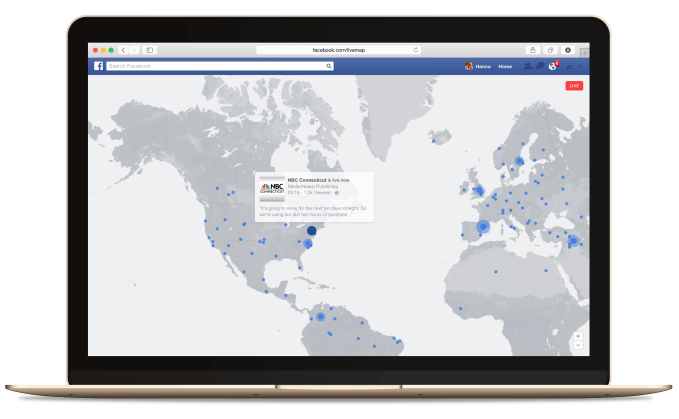 That’s why it’s came out and announced it was giving a big News Feed visibility boost to Live videos. It wants to incentivize broadcasters to jump aboard by showering them with crowds of viewers. Simo tells me “There is definitely a first mover advantage.”

Eventually, as more broadcasters adopt the platform, that visibility will be spread out amongst the competition, similar to the decreasing reach of Page posts. “That’s why we’re encouraging public figures and media companies to get in early and figure out what works” Simo explains.

The new Live video reach metrics help prove why producers should favor Facebook. As should offering APIs so news rooms can use their professional video equipment to broadcast Live, which the New York Times reported earlier and Simo confirmed to me.

But Facebook is going a step further. Simo tells me a small, select group of news outlets are being paid directly by Facebook to cover their costs of broadcasting Live video on Facebook, rather than on their websites where they can monetize with ads.

For some key publishers “We’re offering very early financial incentives to figure out the production up front and set up the studios” Simo says. “This is really meant for them to get started on the format but the goal is to find a long-term monetization model that works for them.” One possibility is a revenue share from video ads viewed after a producer’s Live broadcast, similar to the payout test Facebook is currently running with some recorded video webstars.

Facebook hopes the combination of reach, gathering an early following of users who get notifications about their Live broadcasts, and straight-up cash will pull in high-quality real-time video content. 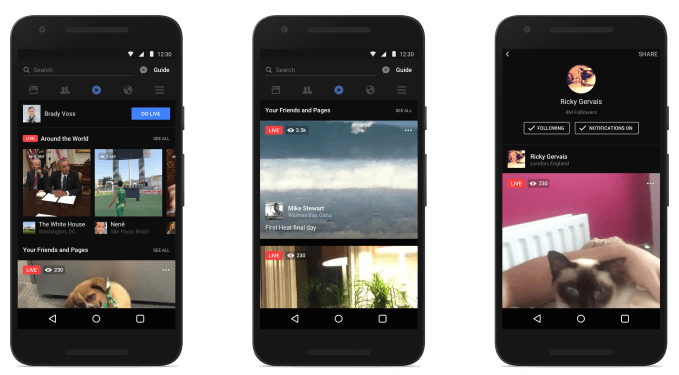 It could all be a smart investment for Facebook. Video ads are the hottest thing in marketing. Brands will pay big bucks for what amount to online TV commercials — the most vivid way to influence people. The more user generated videos Facebook hosts and can accustom people to watching, the more Videos ads it can naturally slip into the feed and the Suggested Videos that appear after a clip finishes.

But the Internet is full of entertainment, so Facebook needs the best. If the new Video hub can bring even more viewers to both Live and recorded videos, creators will follow the audience, and opt for Facebook over YouTube, Periscope, and Snapchat, allowing Facebook to conquer another part of the social web.

If you’re in SF for Facebook’s conference, come meet our writers at TechCrunch’s pre-F8 Meetup on Monday night