Norwegian startup Auka is setting its sights on hitting two birds with one stone: helping banks to get into compliance with EU regulation and rolling out high-tech banking to customers across Europe.

The company is a white-label service aimed at retail banks and is the first fully licensed and regulated payments infrastructure running on Google’s Cloud Platform. The service aims to make it easy for financial institutions to create mobile payments services and more. 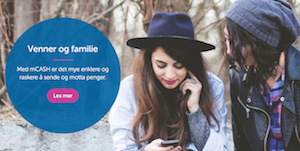 The company’s mCASH product is aimed at small retailers — and making it easier for friends and family to send and receive money.

Historically, payment systems have been operated by banks themselves, but new EU directives are forcing the introduction of an open market, in the hope of making it is far easier to make intra-account payments and payments to merchants. This, in turn, is paving the way for API-first and mobile-first banks such as Atom, Mondo and — with one further layer of abstraction — Auka.

Today’s announcement is that the company is releasing its tech as a turnkey solution for banks who are lagging behind the curve and haven’t gotten their act together in the mobile banking space. Instead of having to invest huge amounts of time and money in developing their own solutions, Auka claims that a full end-to-end integration with a bank takes less than three months. The mobile solutions can be customized with branding, and can include real-time peer-to-peer payments, point-of-sale solutions and merchant services.

Auka is one of the flagship showcases for Google’s Cloud Platform. “I’m excited and privileged to work together with the Auka team. I believe what Auka is doing is very disruptive and a great step forward for the financial industry,” said Otso Juntunen, Head of Google Cloud Platform in the Nordics.

Auka launched mCASH, its first mobile payments platform and a competitor to PayPal of sorts, back in 2014. mCASH targets entry-level mobile payments for small online stores, sending money to friends and family and running small retail operations such as cafes and restaurants, concerts and events. With its white-label relaunch, the company is entering its second wind, aiming at a much bigger market. The platform counts 17 banks and thousands of merchants among its users.

“It is a digital revolution that will completely alter the current banking model and require financial institutions to adapt their business and operating mode,” Auka claims, and with its Europe-wide roll-out, the company is offering a helping hand to the large number of slower-moving players in the banking world.