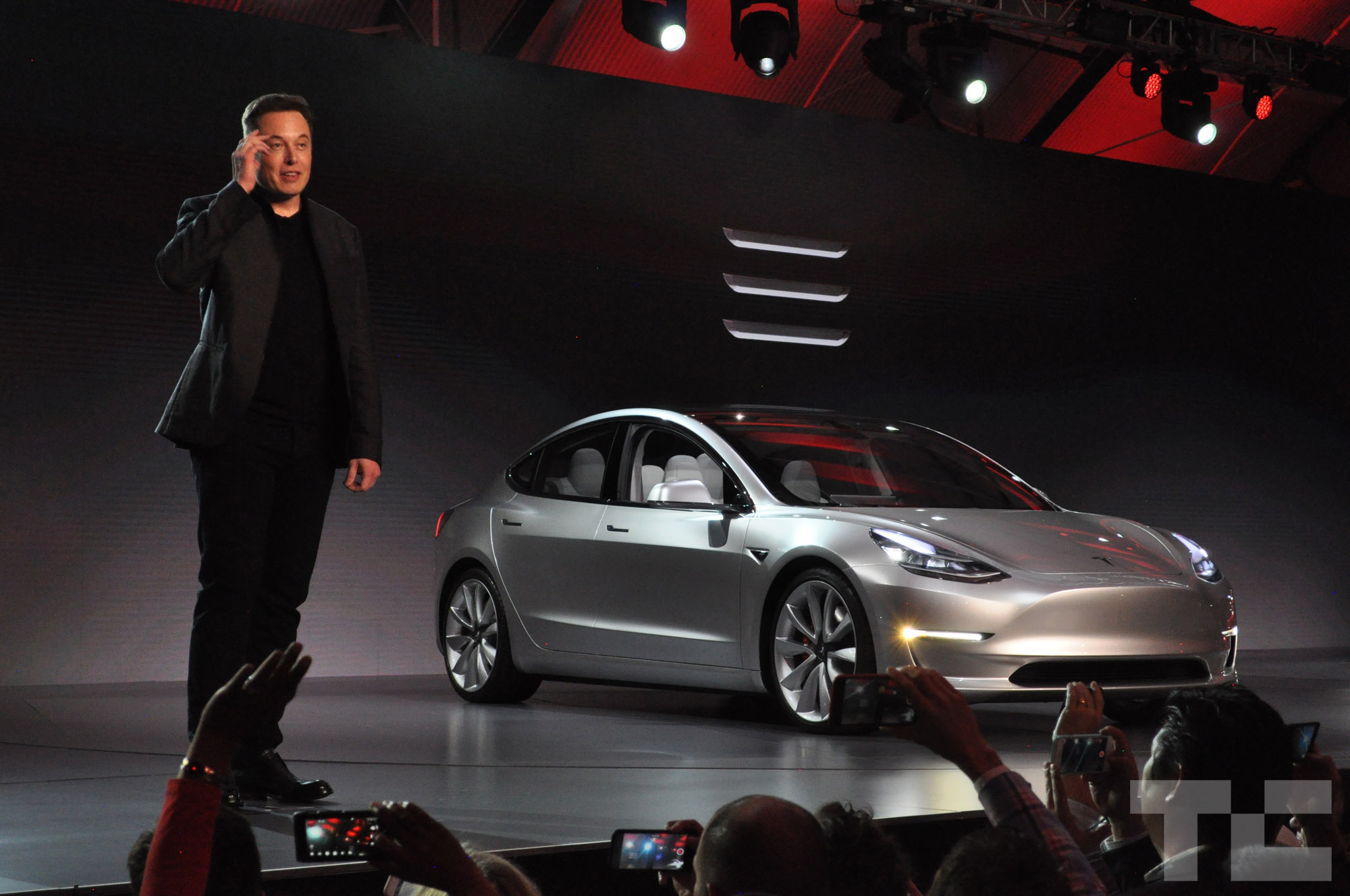 In a curious stray from the norm, Tesla had one strange rule at tonight’s Model 3 unveiling: no “big” cameras allowed. Camera phones were okay, but if it had a big zoom lens, it wasn’t supposed to come in.

Why? We’re not 100% sure. I asked around, and the closest thing to an answer I heard was that the car isn’t quite finished yet so the finer details are subject to change. Dark, crowded rooms and tiny cell phone camera sensors make for… a pretty challenging photo shooting environment

As such, good photos of the Model 3 — outside of the ones that Tesla has released themselves (which seem to be renders, for the most part) — might be hard to come by. So, well, here: 14 actual photos of the actual car, as taken by myself and a few colleagues at the event.

This would normally be one of our slideshow/gallery things… but, well, the gallery loads pictures small and that kind of defeats the point. Enjoy!

(Just want to know more about the car? Here’s our post about the actual announcement itself) 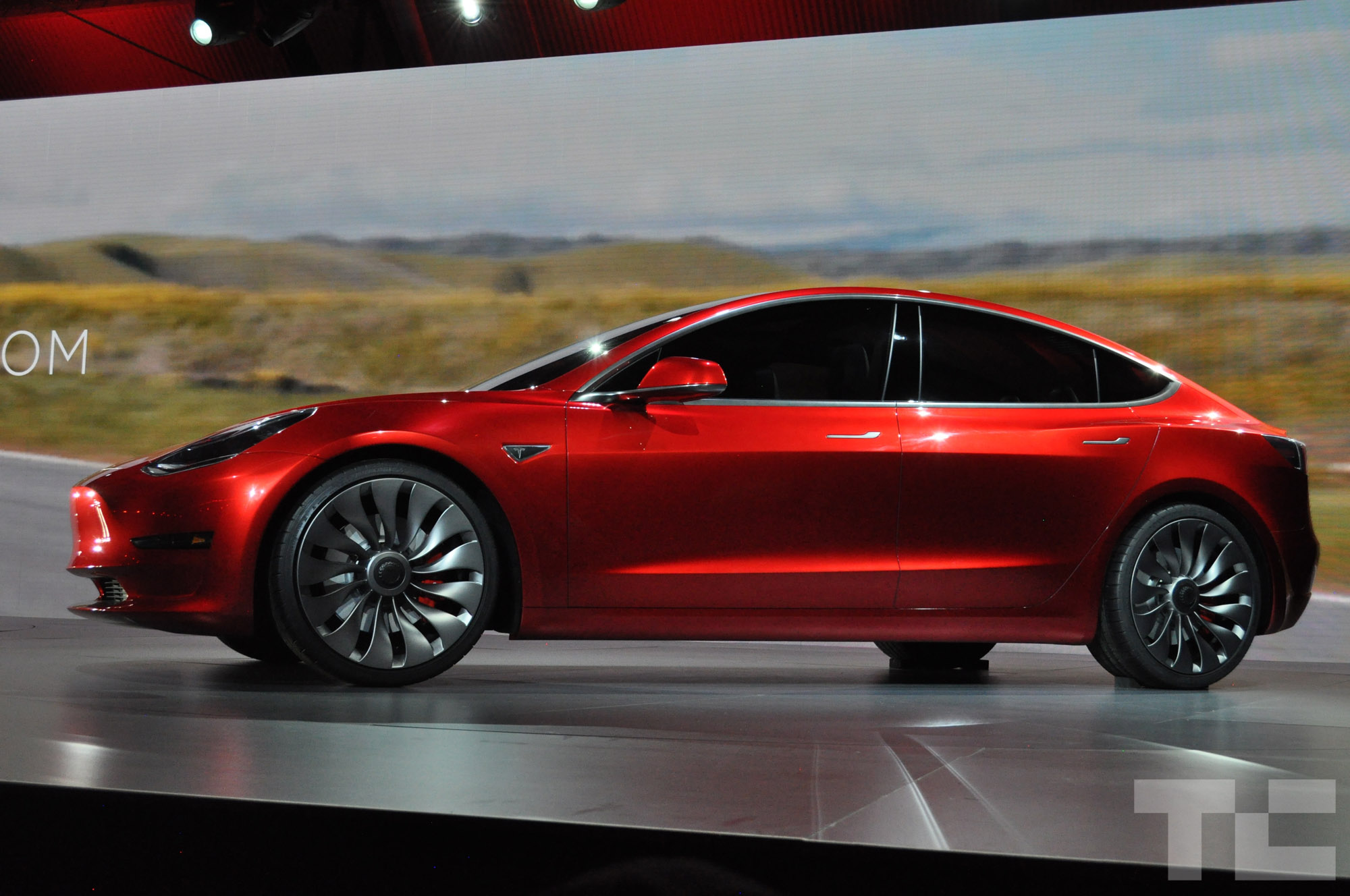 While the silver car up top was center stage throughout the presentation, they had one single red car off to the right.

The car clearly borrows much of its design language from the Model S, but it’s hardly just a miniaturized clone. The front end, in particular, is wildly different. From this angle, the front actually reminds me ever so slightly — of the Scion FRS/Subaru BRZ (which, really, is a good thing — the front of that car is friggin’ gorgeous) 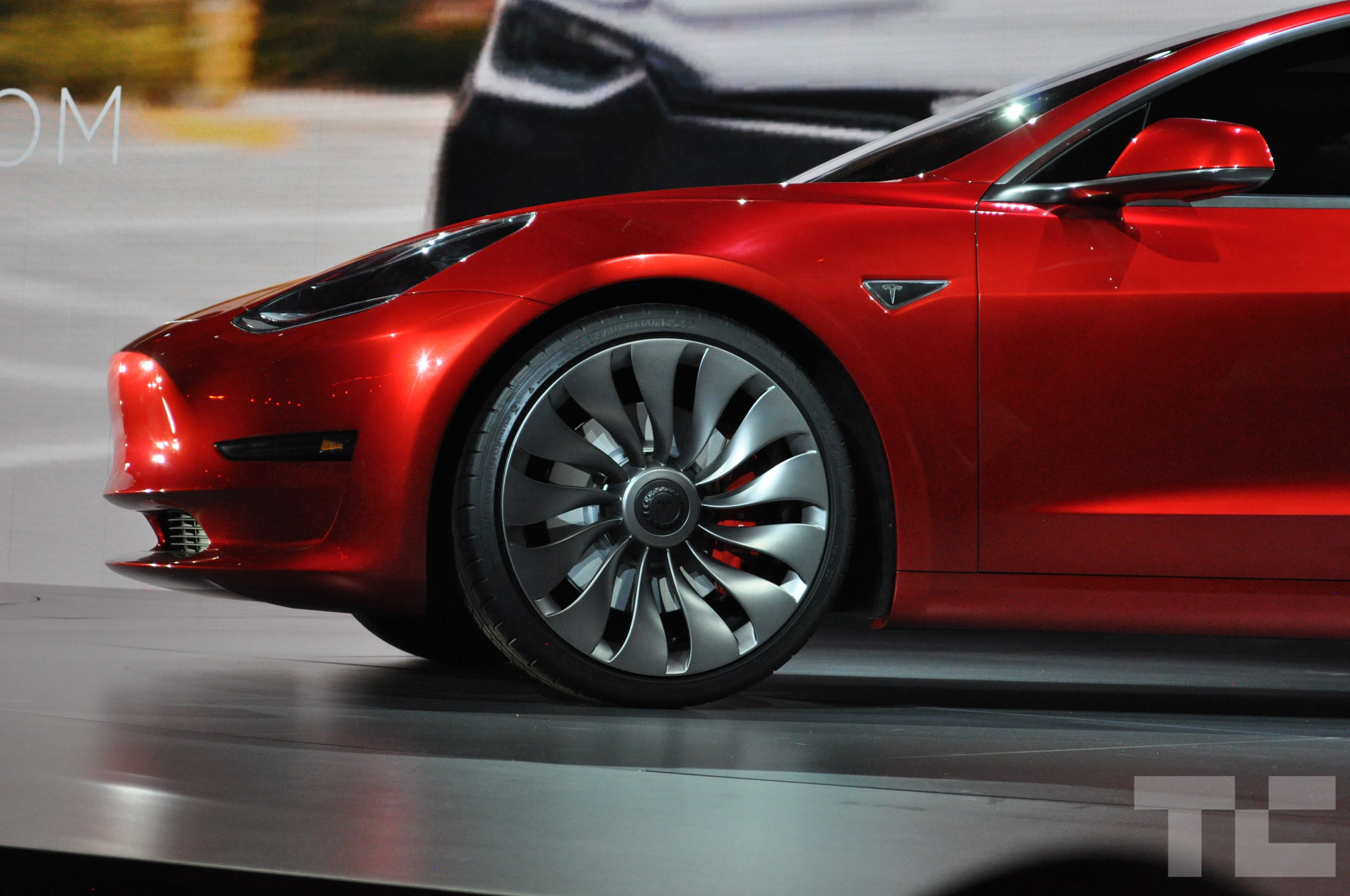 You’ll see some different ones later on in this photo set, so this might be one of those details Tesla hasn’t quite settled on yet — or, just as likely, there will be multiple options. 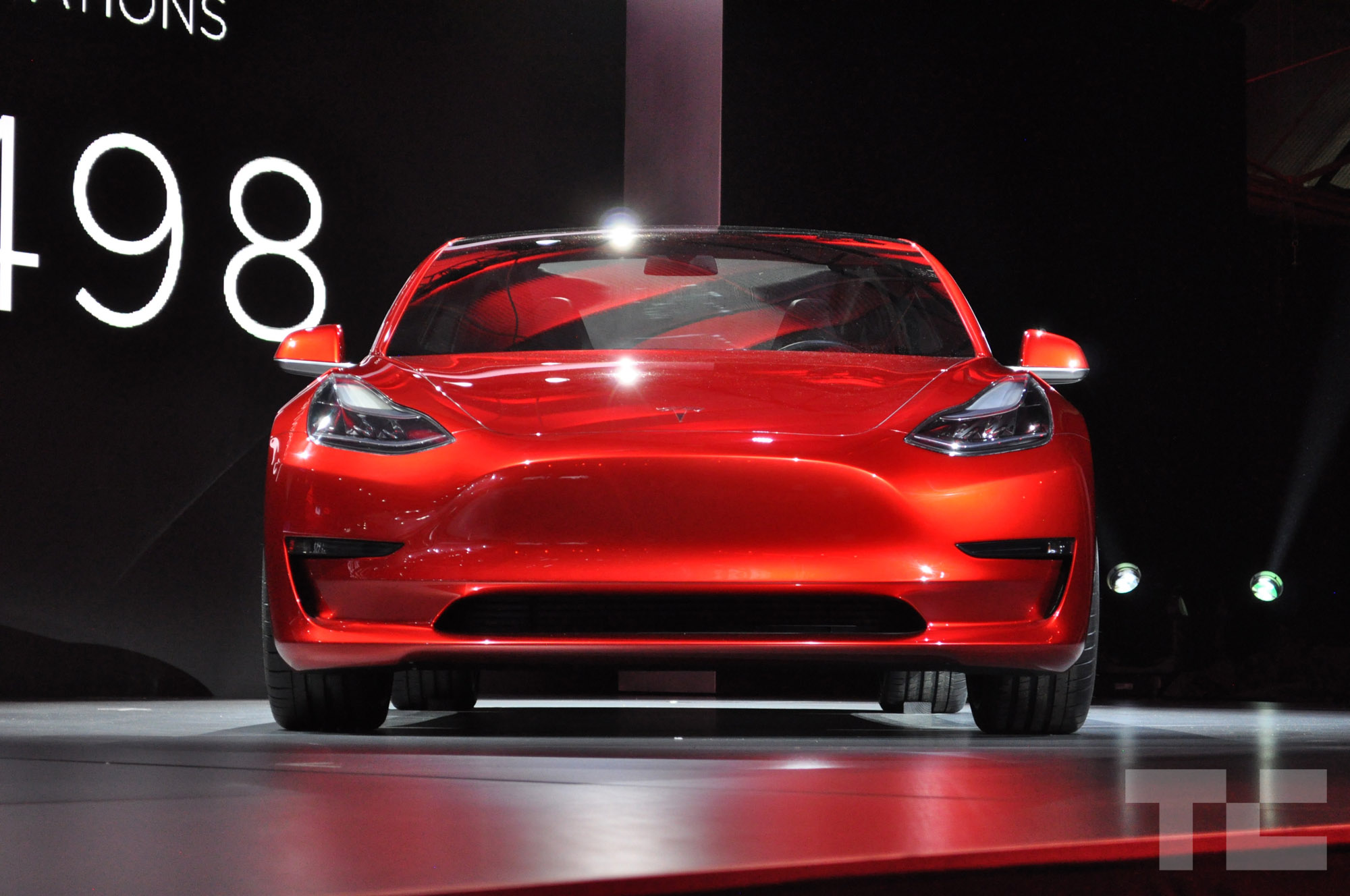 Will they keep that mostly-grill-free nose? I sure as hell hope so; it looks stunning in person. Almost a little surreal; like someone was modeling the car in clay and forgot to carve the grill, took a step back, and said “Oh, hey, that actually looks pretty good like that.” 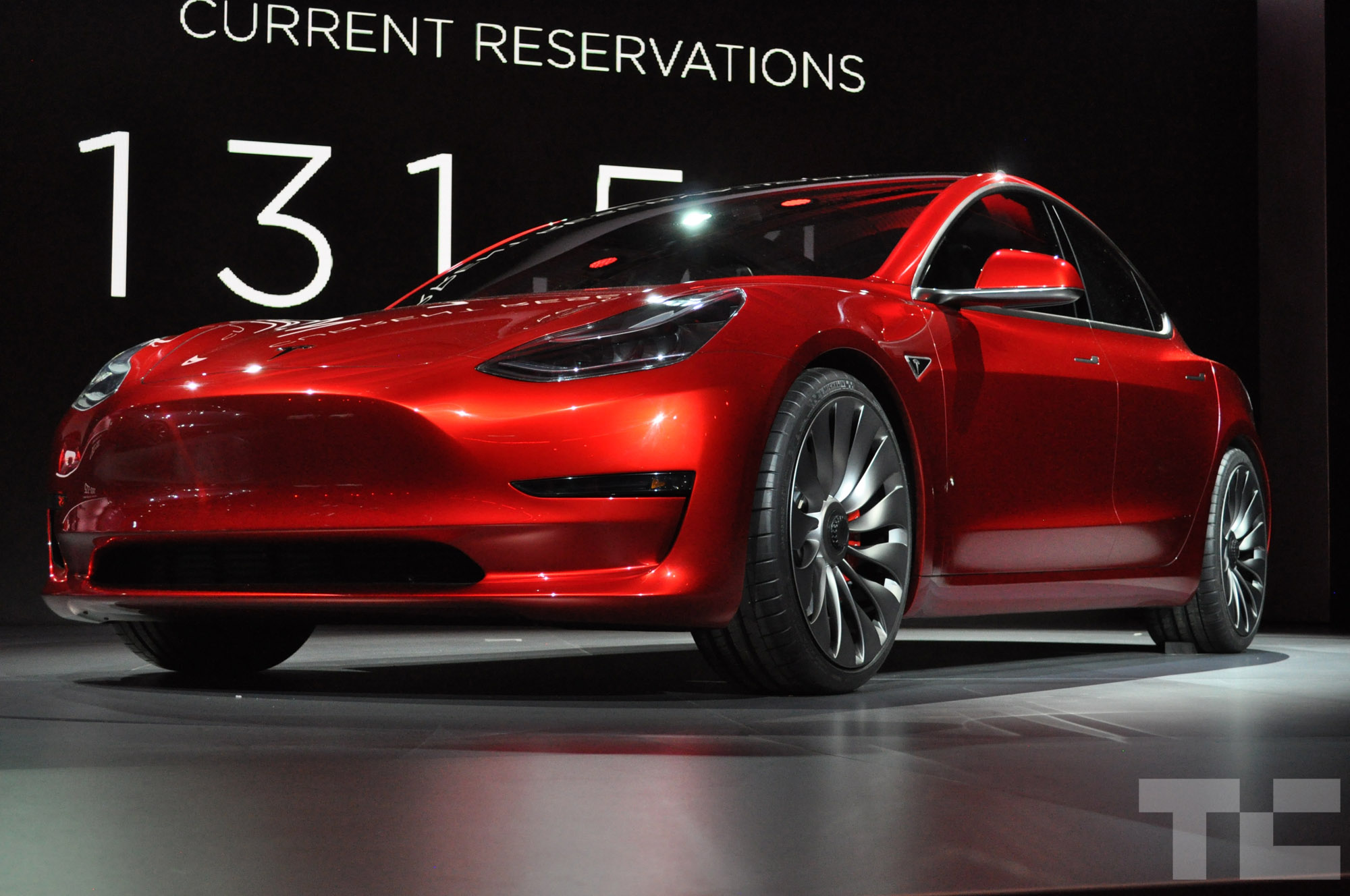 Like many a Tesla before it, the door handles on the Model 3 tuck away into the body of the car when the vehicle is in motion. The handles on this prototype are notably curvier than the handles of the Model S or X, though. 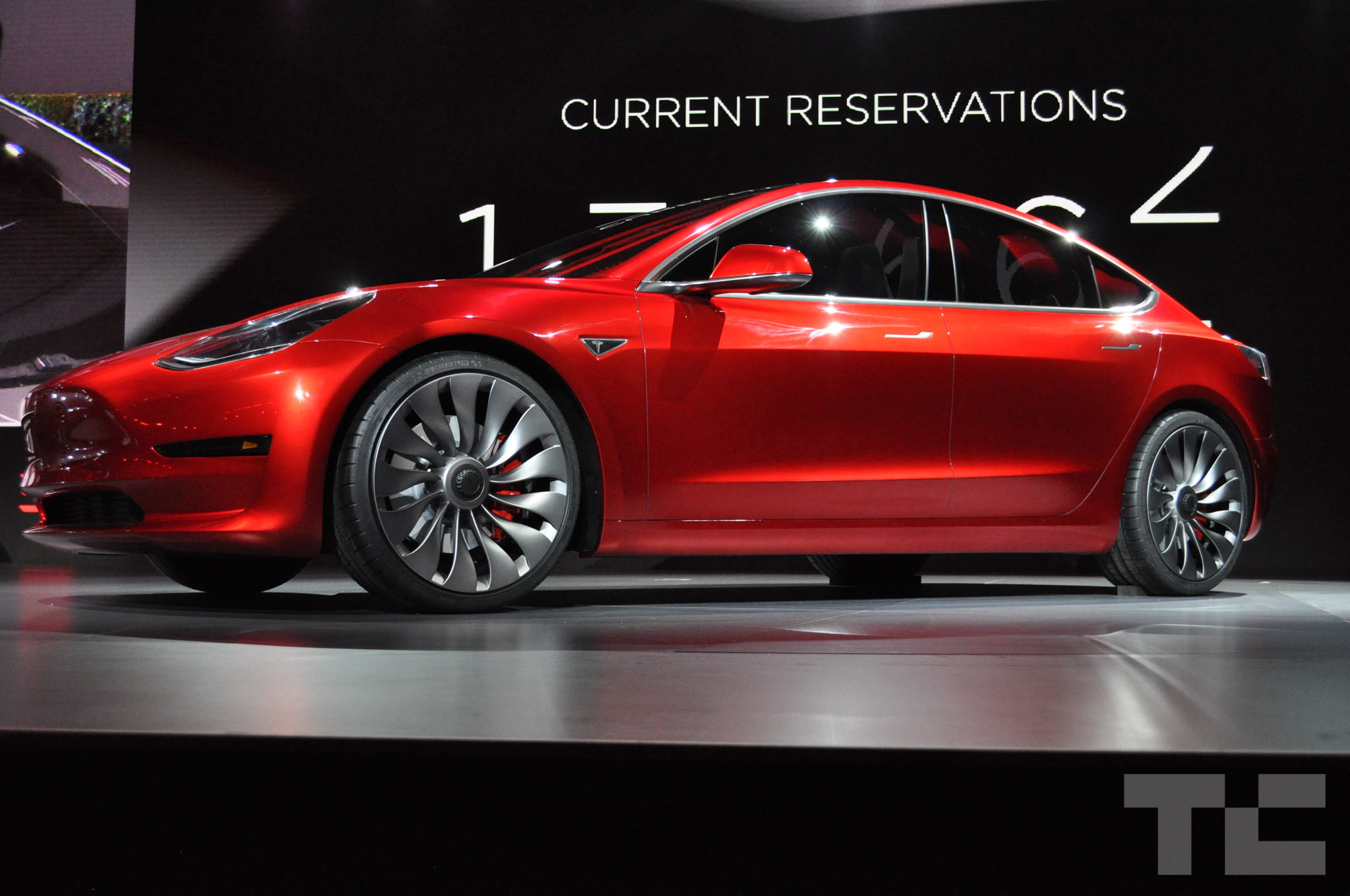 Just after the unveiling ended, the onstage screen flipped into a live counter showing the number of pre-orders that had been placed. By the time Elon took the stage, it was at around 110,000 — and that’s before anyone had seen the car. Within about 40 minutes, it was at 150,000 (at which point they shut down the counter.) 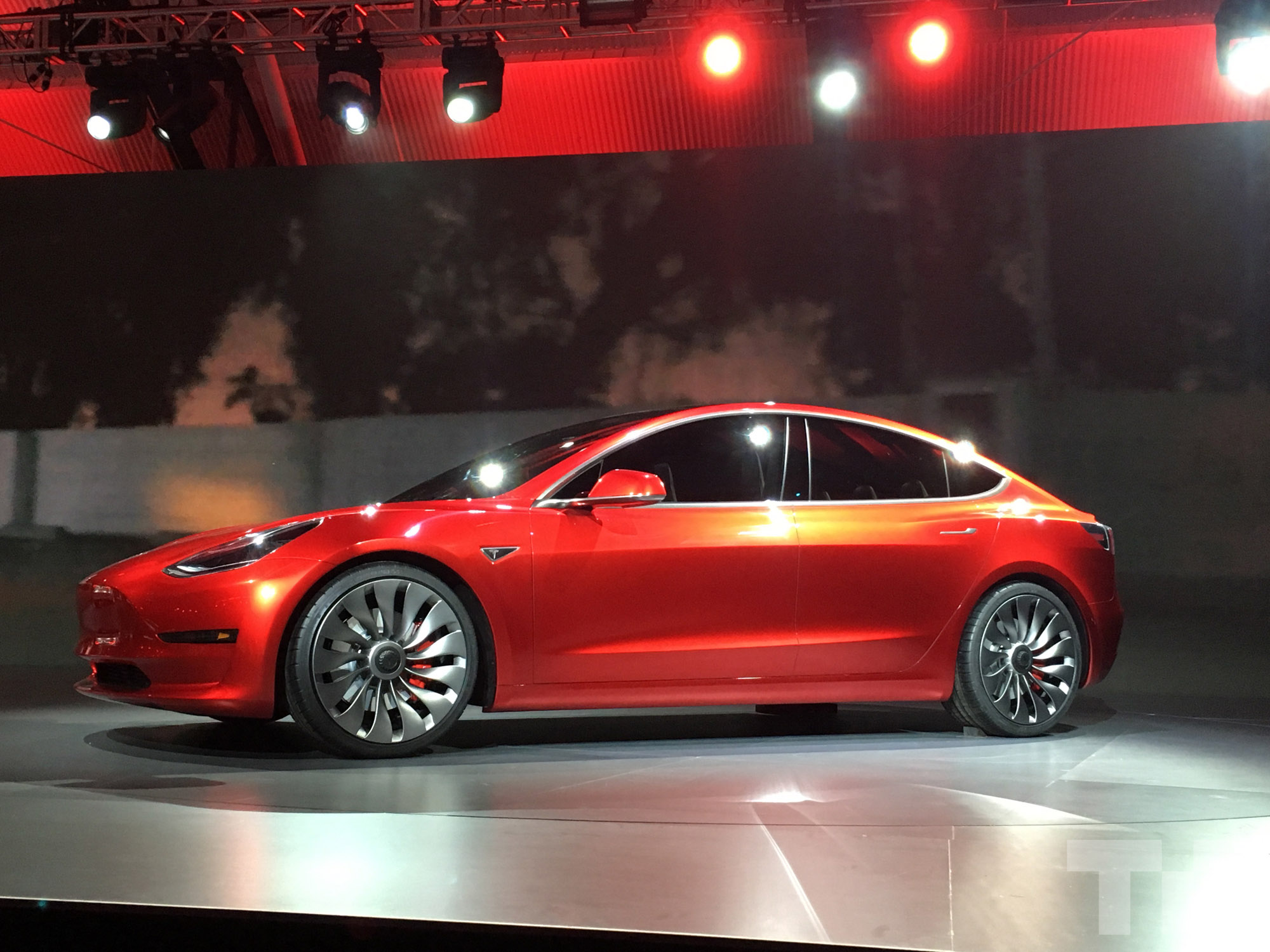 One last shot of Red… 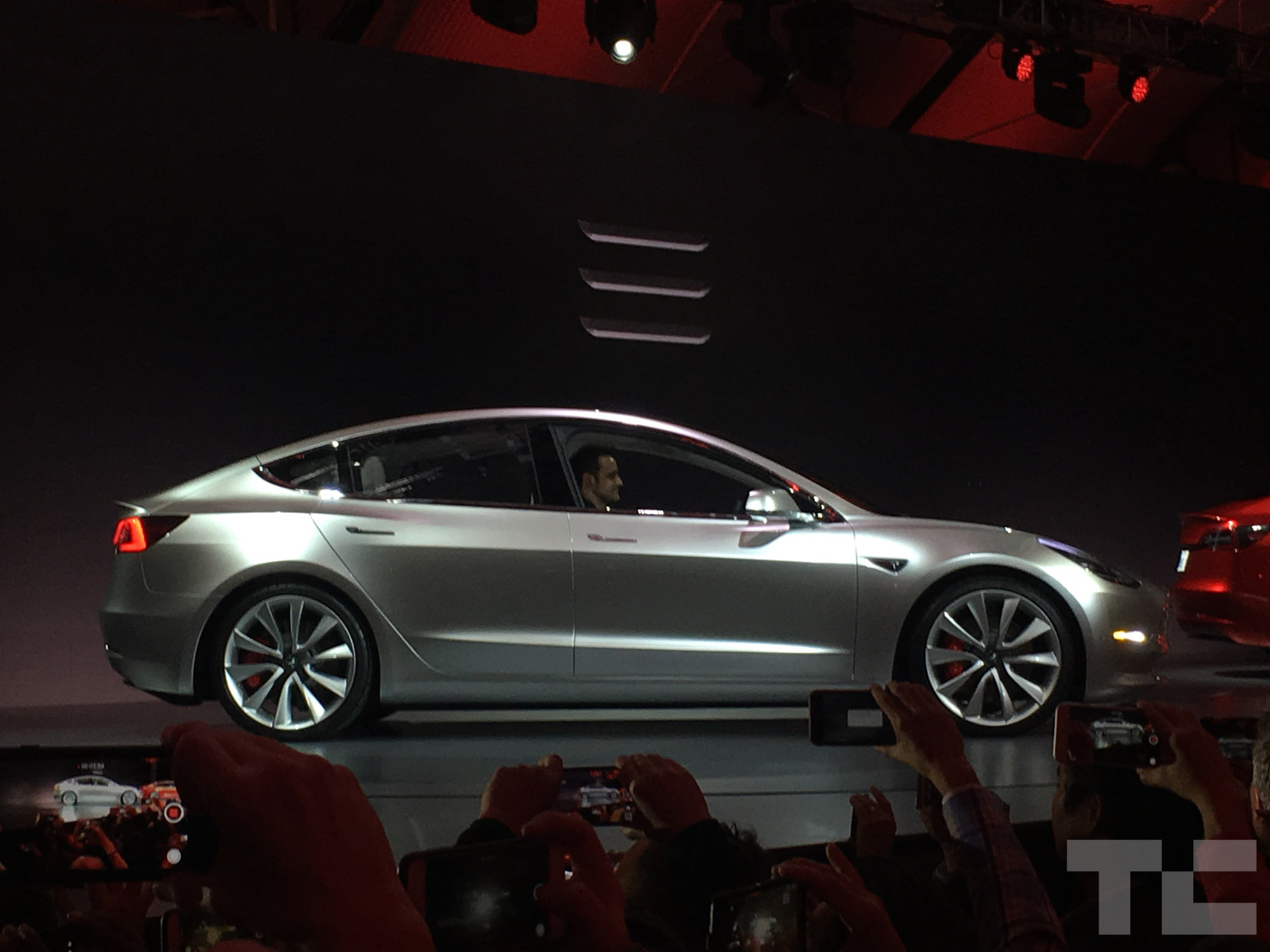 The aforementioned silver model, from the side. 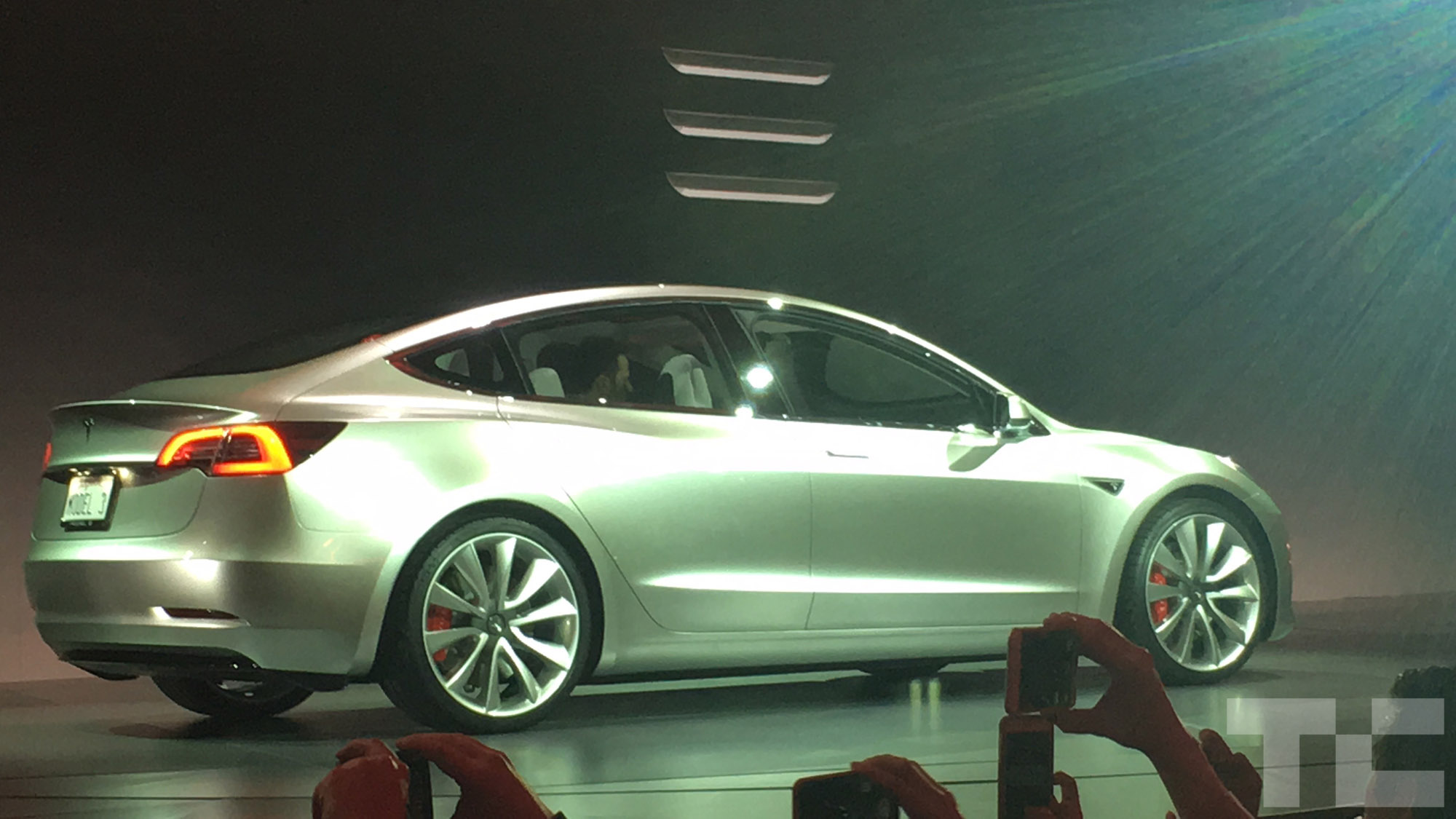 ever so slightly turned, with more lens flare!! 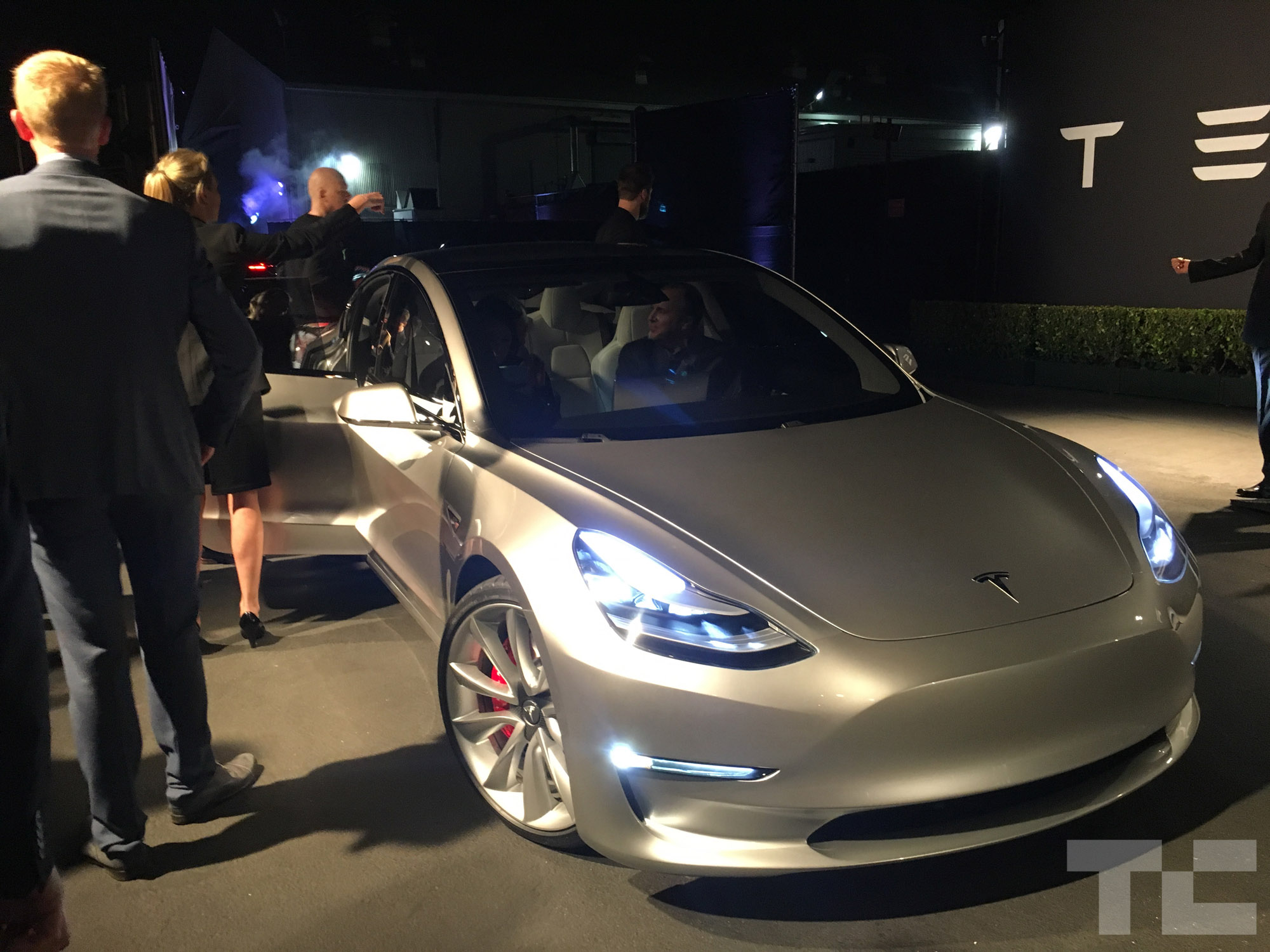 Getting ready for a test ride…

Alas, I didn’t get to drive the Model 3. In fact, no one outside of Tesla employees did — unlike at the debut of the Model X, this one was just a ride-along. There were but a handful of road-ready prototypes at the event, and a few hundred people waiting for a ride, each with a pre-designated number assigned to them. Needless to say, there was a bit of a queue. 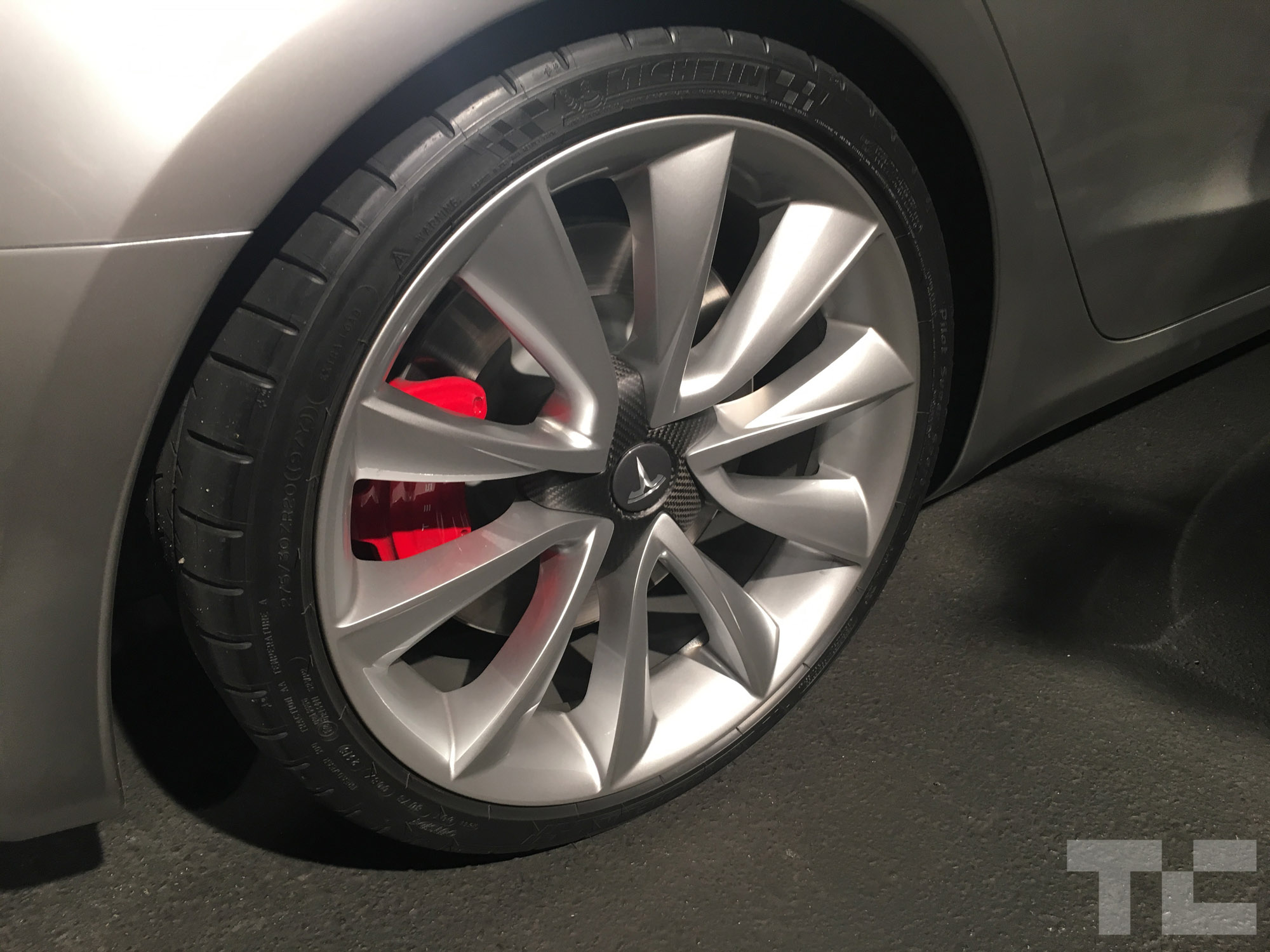 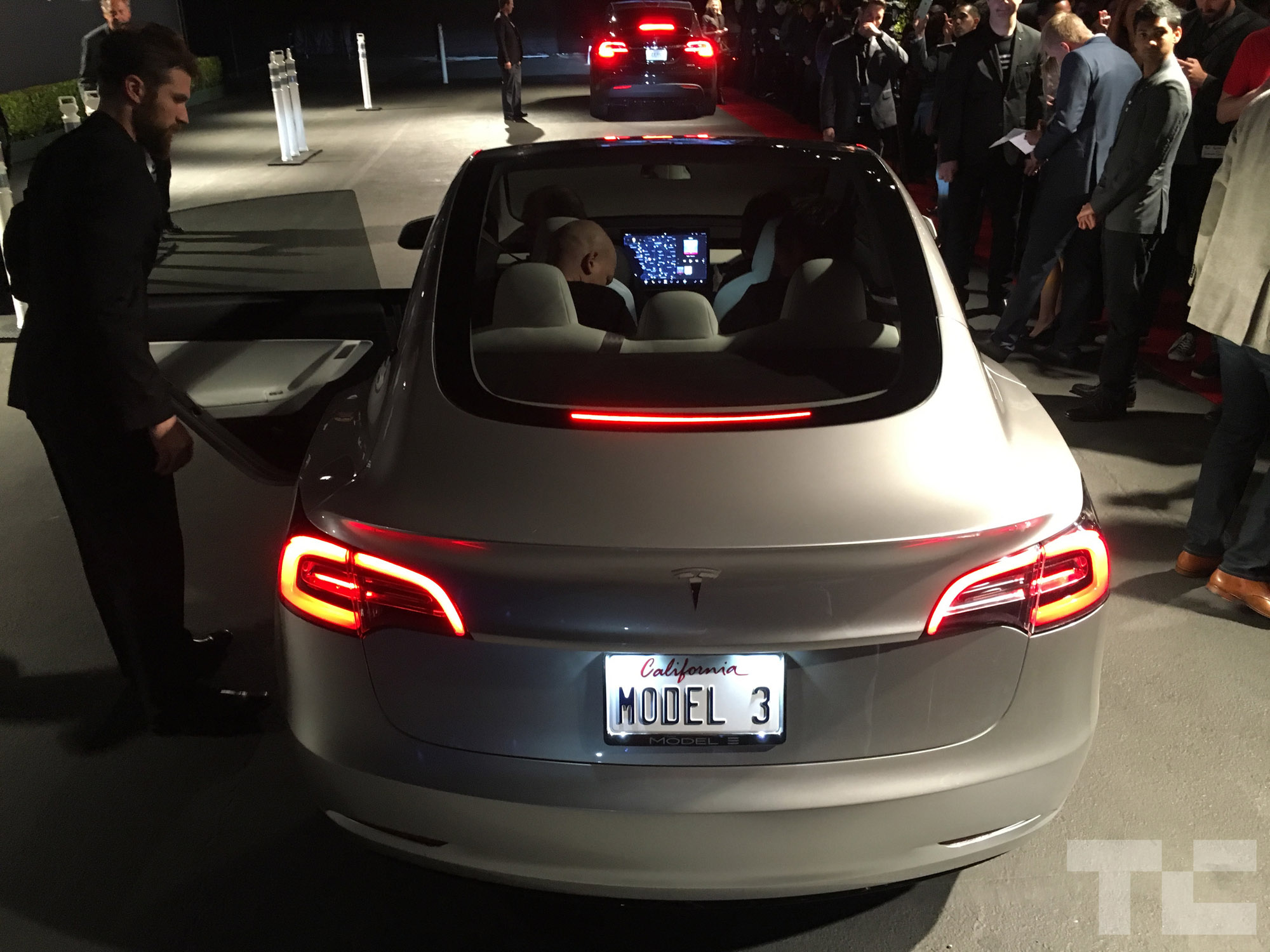 It was tough to get a proper shot of the roof, but it’s a beauty. It’s essentially one big pane of glass, visibly split only by two supports: one where the front seat visors are, and one right above the driver/passenger headrests. Otherwise, it’s more sunroof than roof-roof. It’s like someone took the already damned gorgeous panoramic roof of the Model X and dragged it all the way to the back. I imagine it’s pretty insane during the day, or during particularly starry nights. 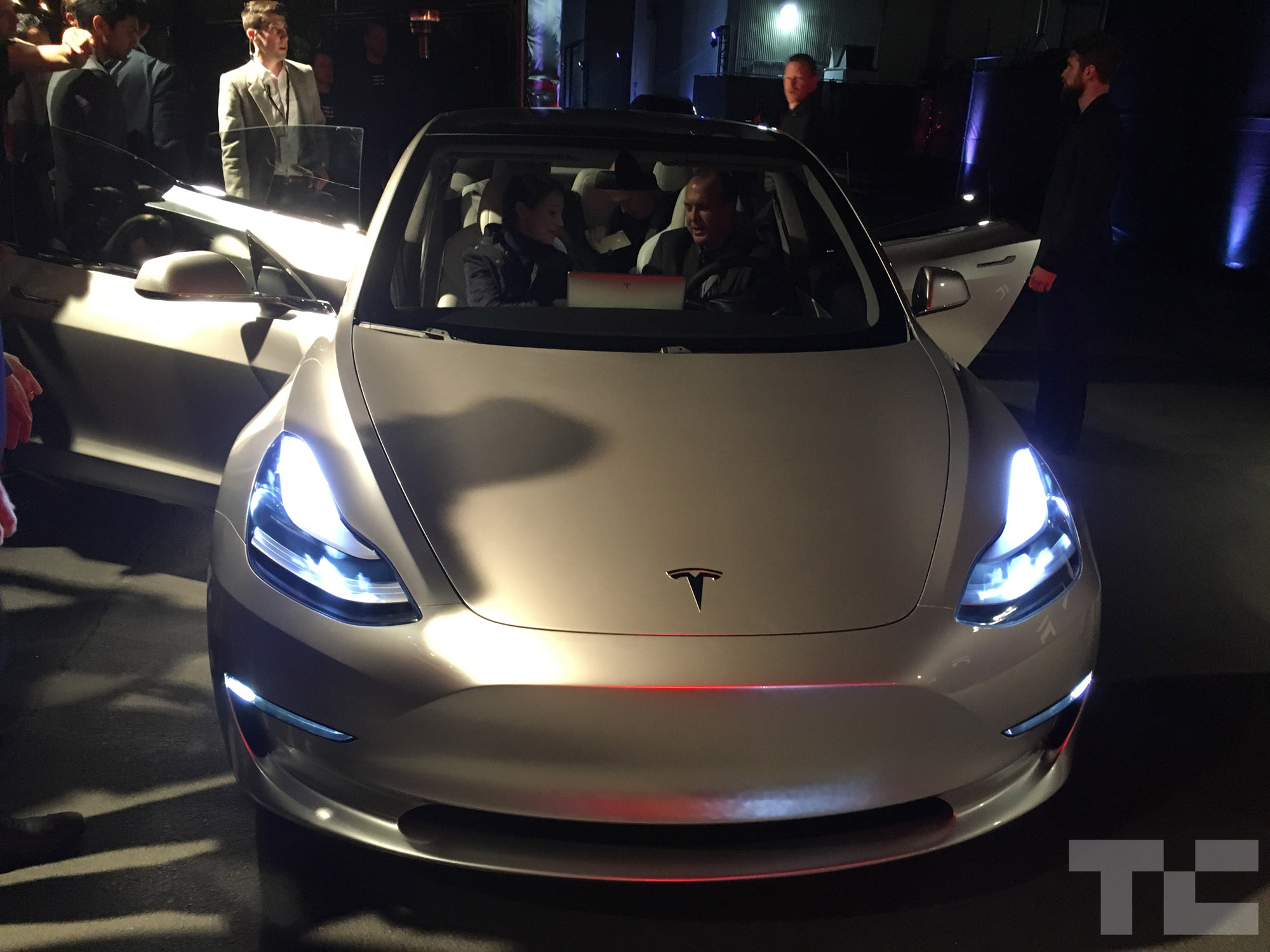 See that thing between the driver and the passenger? That’s a big ol’ touchscreen, similar to the one found in the Model S… but it’s now a 15″ landscape (wide) screen, rather than a 17″ portrait screen. It juts out a bit more from the dash than the one found in the S; it was unclear if that’s likely to change in the final design. 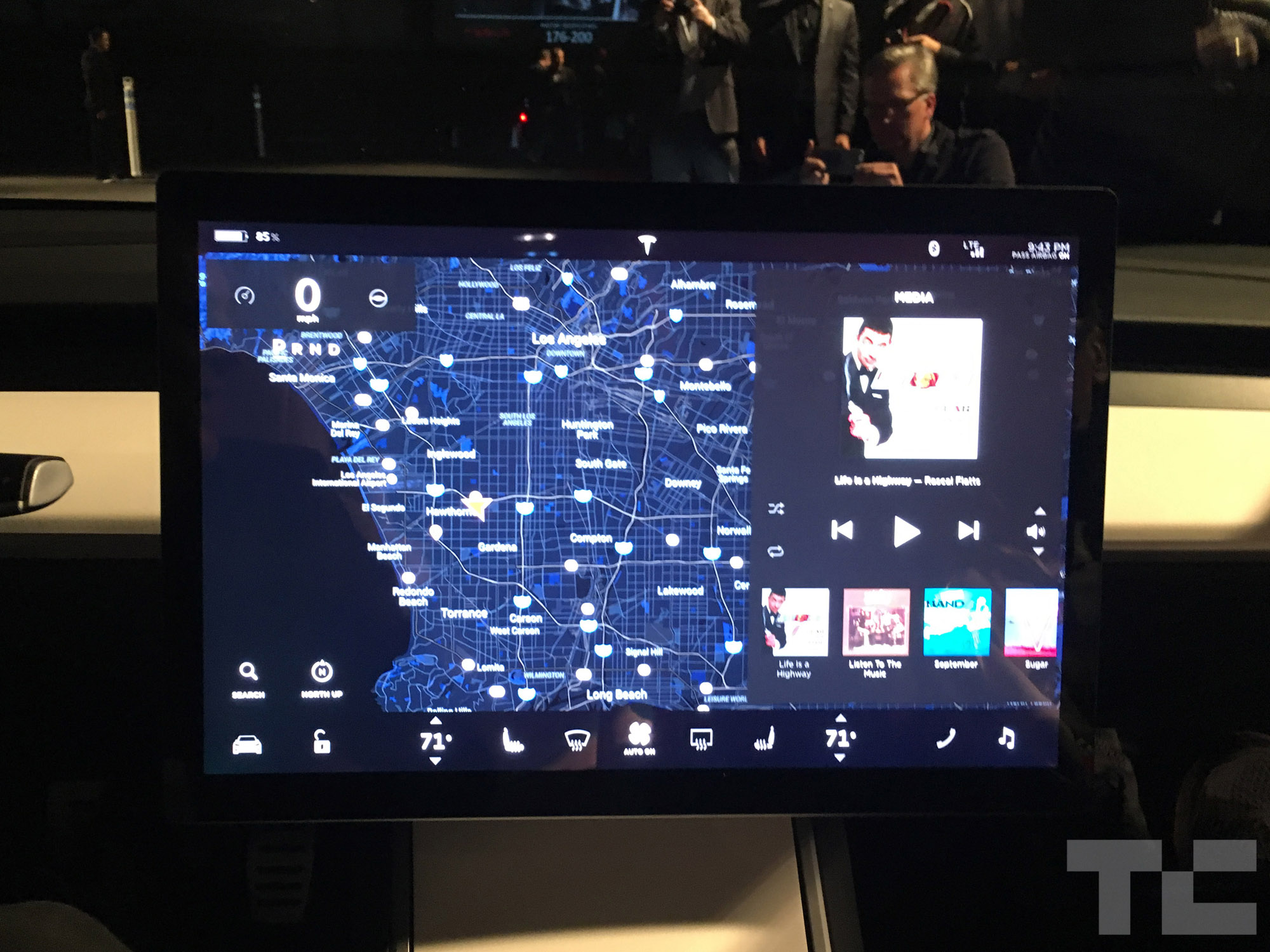 That screen, from the other side

I imagine the look of this interface will change a bit by the time the car actually ships; it’s a bit spartan for now, but it gets the job done at this early stage.