It seems like I talk about connected cars and V2X and autonomous vehicles like it’s my job. Probably because it is. But like a lot of people, I do not yet own a car that’s connected in any way. There are a lot of new companies that want to rectify this situation for us by using the OBD-II port to bring Wi-Fi and connected apps to the cars we already drive.

If you’re wondering if your car has one of these OBD-II ports, unless it’s a vintage Alfa Romeo or Chevy Impala, it does. Every car made in the United States since 1996 has been required to have an OBD-II port, which covers the majority of cars on the road today. It’s the same port mechanics use to get the diagnostic code when something goes wrong. You’ll likely find it under the dash near the steering wheel.

While some competing devices are merely Wi-Fi hotspots, Zubie wants to fully connect your car to the Internet of Things. It’s not alone in this — companies like Mojio and Dash are connecting cars via the OBD-II port, too.

Zubie sent me a test unit ($100 a year without Wi-Fi, $100 one-time fee with Wi-Fi) to play with for a few weeks. Setup was really easy; in about three steps, I had the unit plugged into the port and the app up and running. You’ve got the choice to sign in with a user name and password, or to just use your Facebook account. The last step is to actually drive the car to initiate the device, so I took a quick trip around the block. That was enough; I was ready to go. 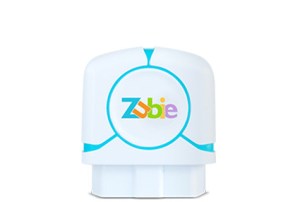 The first thing I set Zubie up to do was send a report of each journey to a spreadsheet in Google Drive. It created a folder called “Zubie” and named the sheet “Vehicle Trip Log,” so that was as intuitive as it gets. It tracked things like start and stop locations, how long each trip took and the cost of fuel used per trip.

Like similar insurance company devices that plug into the same port, Zubie tracks and rates your driving habits. I have a habit of hard braking, apparently, but otherwise my scores on rapid acceleration, speeding (which it breaks into major and minor speeding) and top speed were good. The app has a map that shows where things like hard stops and speeding happen. If you were monitoring a new driver in the household, this could be very handy.

Zubie uses all the information available to the diagnostic port to give you more information about your car than you probably need on a daily basis, including battery status (even if your car isn’t electric), engine problems, fuel level, odometer reading and maintenance intervals. Most of the time, all this data isn’t terribly useful because everything is working. But Zubie recently announced a partnership with Castrol innoVentures to share all this data with dealerships. If you give the service department permission, the mechanics could know your car needs attention before you do.

If you’ve succumbed to an Internet of Things gateway drug like a smart thermostat or connected light bulbs, Zubie also integrates with the IFTTT app. Zubie can be set up for personal or business use, and I can see how tracking a fleet of vehicles would be far easier with in-car connections. A brand-new feature also allows fleet managers to see when vehicles are being driven during off hours.

After all that, Zubie also can work as a Wi-Fi hotspot (with a Verizon Wireless* account) for devices in the car.

Now how much would you pay? If the answer is about $100, you’re in luck. If you don’t need Wi-Fi, the device itself is free, but you’ll pay $100 a year for Zubie service. If you do want Wi-Fi, there’s a $100 flat fee for the plug-in device, and the cost of a Verizon 4G LTE data plan. Either way, it’s far cheaper to join the world of connected cars via Zubie than to buy a new car.

*Disclosure: TechCrunch, through AOL, is owned by Verizon.