Docker announced a new container control center today it’s calling the Docker Datacenter (DDC), an integrated administrative console that has been designed to give large and small businesses control over creating, managing and shipping containers.

The DDC is a new tool made up of various commercial pieces including Docker Universal Control Plane (which also happens to be generally available today) and Docker Trusted Registry. It also includes open source pieces such as Docker Engine. The idea is to give companies the ability to manage the entire lifecycle of Dockerized applications from one central administrative interface.

Customers actually were the driving force behind this new tool. While companies liked the agility that Docker containers give them, they also wanted management control over administration, security and governance around the containers they were creating and shipping, Scott Johnston, SVP of product management told TechCrunch.

The company has called this Containers as a Service (CaaS), mostly because when customers came to them asking for this type of administrative control, that’s how they described it, Johnston said. 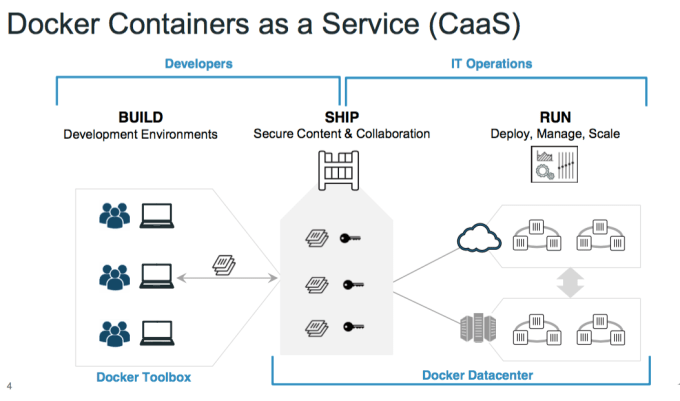 Like many open source projects, Docker gained a strong following among developers first, but as it grew in popularity, the companies these developers were working for wanted a straight-forward way to track and manage them.

That’s exactly what DDC is designed to do. It gives developers the agility they need to create containerized applications, while providing operations with the tools they need to bring order to the process.

In practice this means that developers can create a set of containerized components, have them approved for deployment by operations and then have access to a library of fully certified images. This lets developers pull the pieces they need across a range of applications without having to reinvent the wheel every time. That should speed up application development and deployment (and add to the agility that containers should in theory be providing in the first place).

This aspect appealed to Beta customer ADP. The payroll services giant particularly liked having this central repository of images available to developers.

“As part of our initiative to modernize our business-critical applications to microservices, ADP has been investigating solutions that would enable our developers to leverage a central library of IT-vetted and secured core services that they could rapidly iterate on,” said Keith Fulton, Chief Technology Officer at ADP said in a statement.

Docker was launched in 2010 by founder Solomon Hykes as dotCloud. He pivoted the company to Docker in 2013, selling dotCloud in August, 2014 to focus completely on Docker.

The company came out of the gate like gangbusters a couple of years ago raising $180 million ($168 million since becoming Docker) over five rounds, according to CrunchBase. What caught the attention of investors was that Docker offered a way to deliver applications for the modern age called containers, a way of building, managing and shipping distributed applications.

Containerization enables developers to create these distributed applications made up of small discrete pieces that run across multiple servers, as opposed to the large monolithic applications companies used to create running on a single server.

Pricing for Docker Datacenter starts at $150 per node per month.