YouAppi, a US-Israeli startup that helps companies acquire users through mobile ads and analytics, has closed a $13.1 million Series B round to develop its technology and expand its business Asia.

The company was founded in 2011 with the aim of providing a single platform for companies wanting to attract and retain new users on mobile. It combines a mobile ad platform that syncs with over 3,500 mobile apps and sites, with analytics — measuring 25 data points of a user — and predictive algorithms powered by machine learning. Using that data, YouAppi also works with existing mobile advertising players — such as Cheetah Mobile — to better understand their audiences and optimize their ad inventory.

“We help major branded apps to acquire highly valuable customers,” Moshe Vaknin, CEO & cofounder, told TechCrunch in an interview. “We see what happens with every click, for every user. Lots of companies collect data, but few understand how to use it.” 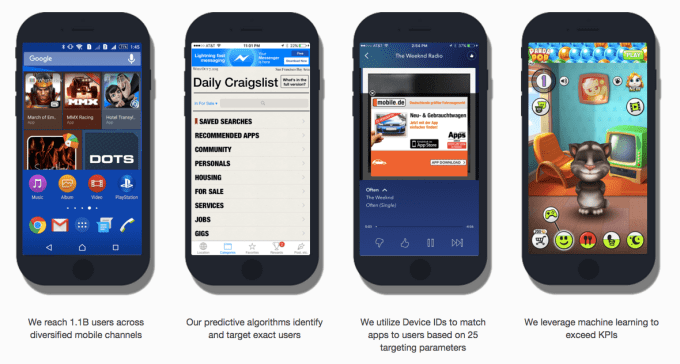 YouAppi has raised $5 million from investors to date, and it has teams in San Francisco and New York in the U.S., and China, India, Israel, Singapore, Germany and the UK. Vaknin said that, as of now, North America accounts for 60 percent of revenue, with Asia picking up 30 percent. The round included Asia-based investors Hawk Ventures (China) and Global Brain (Japan) with the aim of increasing focus on potential growth markets. In China alone, YouAppi is working with Baidu, Alibaba, Sungy Mobile and APUS — and it expects its revenue from China to double from 10 percent to 20 percent of its worldwide income this year.

Outside of growing the company in Asia — and YouAppi is planning to open offices in India and Indonesia soon — the remaining two-thirds of this funding round will be set aside and used to expand the U.S. team from its current 20 person headcount to 28, and develop YouAppi’s tech.

According to Vaknin, 2016 is set to be a big year for YouAppi. He expects that the company will be profitable by August, while a Series C round “to help further scale growth” is planned for the final quarter of the year.