Ajay Agarwal Contributor
Ajay Agarwal is a managing director at Bain Capital Ventures, where he focuses on early-stage SaaS investing.
More posts by this contributor

It’s a new environment for startups in 2016. Financing will get harder. Valuation inflation will dissipate. Profitability will be in vogue again. And old-fashioned business fundamentals will balance out the disruption frenzy of the past five years.

Given the new investment climate, what’s an entrepreneur to do? To answer that, let’s first examine the factors behind Silicon Valley’s climate change.

First, public market valuations for relatively young technology companies have been declining of late — especially for those that remain unprofitable. For example, we’ve seen valuation multiples for unprofitable SaaS companies drop by more than 60 percent from 2014 to today (see below). Valuation multiples for profitable SaaS companies, by contrast, have dropped by less than 30 percent. 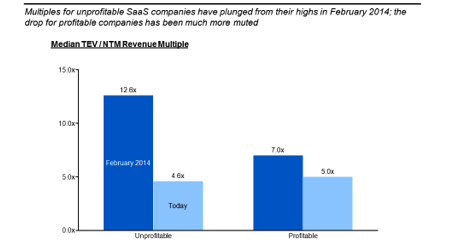 Second, recent IPOs (Atlassian aside) have generated less than stellar returns for late-stage investors. Square, Box and Etsy are good examples of this trend, where early stage investors were rewarded with strong multiples on their long-term investments, while late-stage investors suffered mixed results. TechCrunch has referred to recent tech IPOs as the new down round.

Third, we’ve seen Fidelity and others publicly mark down their valuations of private company investments, from Dropbox and Snapchat to Zenefits and Dataminr.

In short, public and private investors aren’t simply discussing bubbles and valuation concerns like they were in early 2015 — they’re taking action.

Given that new world order, here’s my advice for early stage and late-stage entrepreneurs to navigate the shifting sands:

Prepare insiders to step up: Over the last two-three years, outside investors did not expect earlier inside investors to participate at any material level in later-stage financings. Early stage investors thus benefited from other firms’ capital in later rounds. In the new environment, I anticipate new investors will expect existing investors to contribute significantly to new rounds, providing up to one-third or one-half of the new funding.

Be willing to have multiple new investors in the round: Beyond valuations, the risk tolerance of late-stage investors is changing. New investors will want to write smaller checks to mitigate their risk and exposure — and to reserve capital if the company does need a new round (because external capital is not a given). As a result, entrepreneurs should be prepared to bring together multiple investors at the $10-$15 million level as opposed to finding one lead investor willing to put in $25-$50 million.

Adjust your expectations: Recognize that a clean deal at a flat valuation should be considered a “win” in this environment. Let’s consider a company that last raised at $200 million valuation on a $10 million run rate two years ago — and has now grown to a $30 million run rate (a super healthy tripling of ARR). Absent the new climate, the company might expect to raise a new round at 10x to 12x multiple for $300-$360 million valuation. However, if you factor in that public SaaS multiples have been cut in half or more, a price of $150-$180 million would more fairly reflect the market. Thus, a flat round at $200 million would be a win despite the company’s fast growth.

Prepare your employees: This may be the hardest challenge, given how actively some startups pursued unicorn status to accelerate recruiting efforts. Now, despite two years of massive progress and growth, you need to tell employees that the next round may be flat — and convince them the company isn’t losing market momentum. Professional investors understand all too well that external financings will fluctuate — two years ago, the price was probably too high; today, it may reflect market reality; in the future, it may be too low. It’s important that your employees understand the cost of capital will go up and down based on market dynamics (not just company performance).

The climate change in late-stage private markets will cause some challenges for entrepreneurs and their teams — and result in a higher cost of capital. However, history tells us there is a silver lining for the smart startups that adapt, focus on fundamentals and extend their runway.

That silver lining is a “flight to quality” that typically occurs during periods of multiple compression and financing downturns. As a result, the financing arms race will hopefully subside — and the best startups in each category can grow more efficiently knowing it will be tougher for the No. 3, No. 4 and No. 5 companies to raise capital.