Tango’s new CEO isn’t wasting any time making changes to reverse the declining fortunes of the messaging app company. Co-founder Eric Setton, who made the jump from Tango CTO to CEO one month ago, announced this week that the company is splitting its service into two to rediscover the core chat experience that made it successful.

Valued at more than $1 billion following a $280 million round led by Alibaba in 2014, Tango built a messaging platform that paired chat with social services, but now it is stripping those away and making its chat service “cleaner and simpler” once again. A new app — named Fiesta — has been created to house Tango’s social services, which include the newsfeed, channels, social games, and discovery features that were added over the past few years. 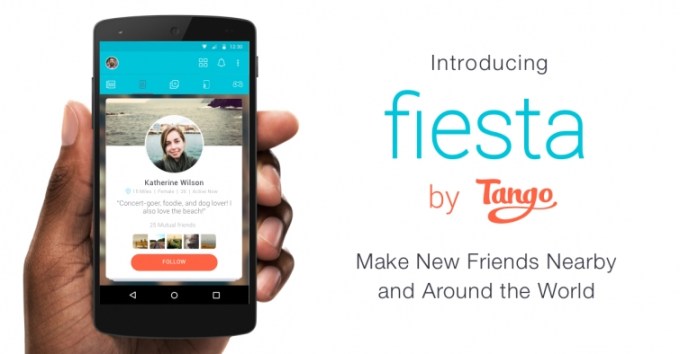 Setton explained the reasoning in more detail in a company blog post — which was first picked up by Forbes:

Over time, we expanded the Tango app to include social networking features. We made it easy for people to chat, play games and make new friends. The additions to the platform provided a richer experience — but in many ways veered away from our core mission. While we added a group of new members, we also inadvertently changed the experience for some of our members who preferred a simpler, focused messaging experience.

Social is tough given Facebook’s utter dominance, so we wouldn’t be hugely surprised to see Fiesta — which is initially available for Android, with an iOS version planned — struggle to gain traction. But, a more streamlined Tango mobile messaging and video calling app could perform better than the current app.

Last year was a difficult one for Tango, which laid off nine percent of its staff and shuttering its effort at e-commerce — in partnership with Alibaba and Wal-Mart, no less — just six months after launch, and watched its rivals accelerate past it. As we reported last month when Setton took the top seat, there were also allegations of mismanagement from former CEO Uri Raz and, according to sources who talked to TechCrunch, a rift between Raz and Tango’s board of directors.

Splitting the app doesn’t remedy these issues overnight, but, in addressing issues within the service with this decision, Setton has demonstrated the kind of clear-headed thinking that the company seems to have been missing for some time. That’s clearly a promising sign.

A reinvention won’t be easy though since the messaging space has matured significantly over the past few years. The market was once saturated with apps but now a few dominant players account for most of the usage, and they vary based on global regions.

We reported last month that Tango still counts 48.5 million monthly active users. That figure is down somewhat from the 70 million active users that Tango claimed in early 2014 when Alibaba invested, but it is enough of a user base for Tango to launch a comeback and remain credible.

The conundrum that Setton will need to figure out is what the app needs to look like and do to differentiate it from more popular players like Facebook Messenger, WhatsApp, Kik, Snapchat, WeChat and Line in order to appeal to new users.

Another challenge will be maintaining revenue, most of which comes from advertising. Setton told Forbes that ad income is split roughly 50-50 between Tango’s social network and core messaging. That may well explain why Tango has created Fiesta, rather than throwing its social features into the bin. It’s a bold move, and the success of Fiesta — and its ability to bring in advertising money — could be a very critical factor for Tango, which hasn’t raised money in nearly two years.