Slack, which released its first diversity report in September 2015, has provided an update on its data because it “got a lot bigger very quickly,” changed its survey methodology to be more inclusive and has seen a shift in its diversity data, according to the Slack blog. 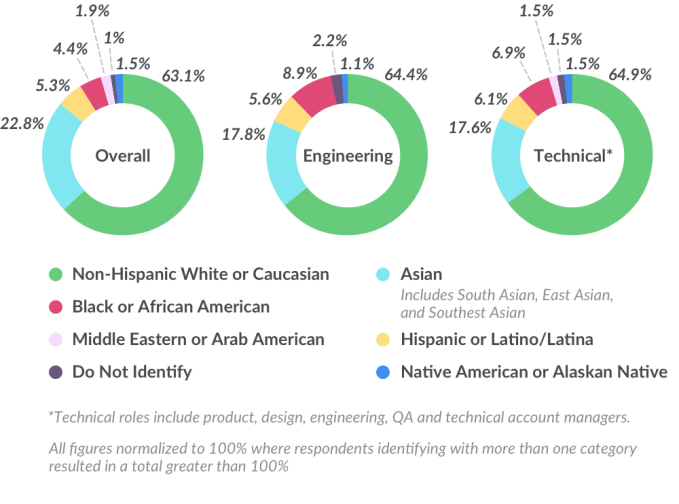 “Often not reported among tech companies is the intersection of race and gender,” Slack wrote. “Looking at women within underrepresented people of color (Native, African-American/Black, Hispanic/Latina (also frequently referred to as underrepresented minorities or “URMs”) we found that 9% of our engineering organization in the US report in these categories.”

Something else companies often don’t report is the population of LGBTQ people. At Slack, its LGBTQ population grew from 10% of its global workforce in June to 13% in December. All seemingly positive results aside, Slack, like every other tech company, still has work to do.

“For example, while there are women leaders in our engineering and technical organizations, there are still no people of color in engineering, product or design leadership who are URMs,” the company writes. “This is a glaring omission for a company where 13% of the global engineering organization are URMs.”

In order to combat that, Slack, like Facebook, will implement the Rooney Rule — a requirement to interview minority candidates for leadership roles — into its recruiting process for senior level leadership roles and its board of directors.