Remittance has always been a shady business. Migrant workers need to send money they earn home to their families, but get hit with fine print fees so less cash comes out the other side than they might assume. Remittance companies earn extra by keeping the margin between their own made up exchange rate and the real one.

Western Union is the best known remittance company, with 500,000 brick-and-mortar locations around the world. But tech startups like TransferWise, Azimo, and WorldRemit are gunning for the business. They hope to increase convenience and reduce fees to lure customers away from Western Union, Moneygram, and other old-school remittance providers.

So Western Union is going digital thanks to partnerships with big messaging apps. It launched its Western Union Connect system in October last year, followed by a partnership with WeChat for sending up to $100.

Now it’s getting into bed with Viber, which has over 664 million “unique” users, though it’s unclear what that stat means. The integration allows people to send up to $100 for $3.99 plus exchange rate fees, and that fixed fee increases the more they send up the $499 limit . 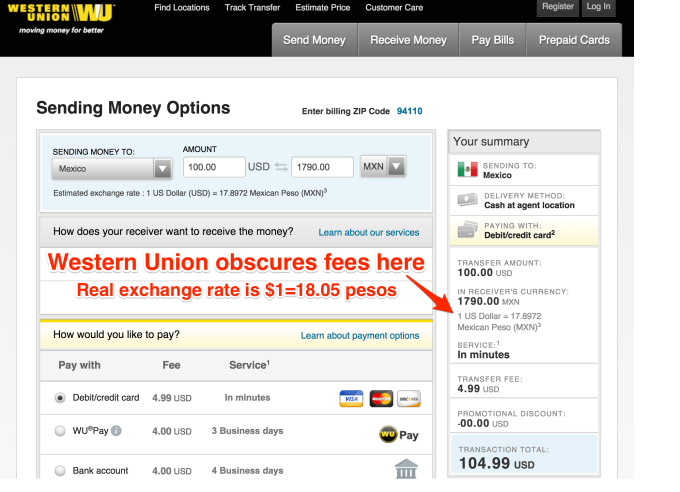 Users add their debit card, credit card, or bank account, choose where they’re sending the money, and the recipient can pick up the cash at a Western Union location or have it transferred to a mobile wallet or bank account. Western Union’s secure servers hold the financial information so it’s less likely to be hacked.

But as with all Western Union transfers, the devil is in the details. An asterisk and some legally required fine print informs users that “**Western Union also makes money from currency exchange.” Essentially, it tells you what the exchange rate it cooked up is, but not what the real one is. Western Union pockets the difference. 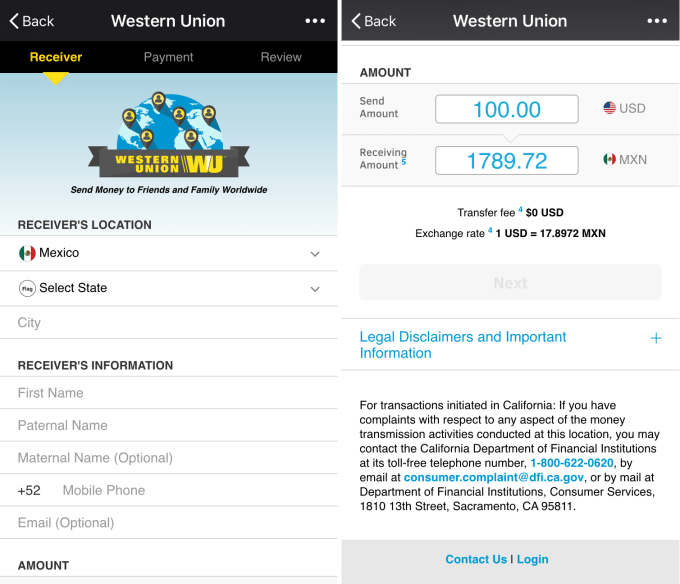 I asked Western Union‘s head of strategic partnerships Sonika Chandra why the company doesn’t go beyond its legal requirement and just show the real standard exchange rate next to the one Western Union makes up. She said “We take all measures possible to make sure the customers understand the fees” and claimed “There’s only so much information that we could pack into the small screen.”

But there’s plenty of space. Western Union didn’t provide screenshots of the Viber experience, yet on WeChat there seems to be enough room amongst all the fields for entering payment information and legal disclaimers to add a line with the actual standard exchange rate. Chandra insisted “This isn’t about not being transparent about it.” I disagree.

Western Union gives a portion of its cut to Viber or WeChat in exchange for bringing them the customer. When asked, Western Union characteristically refused to disclose what the revenue split it offers is.

Perhaps one day Western Union will explore matching transfers going in opposite directions between countries or using the Blockchain to move money with fewer fees, which could help customers save money. Regarding whether it was experimenting like this, a Western Union representative told me “Not at this time — not to say that couldn’t be an option in the future.”

For now, like an iceberg, only part of Western Union’s fees are immediately visible.