A recent report from investment bank Goldman Sachs predicted that within 10 years, virtual reality hardware will be an $80 billion industry. This “base case” forecast assumed that adoption will be slow, as compared to that of smartphones and tablets, but, the report noted, “as the technology advances, price points decline, and an entire new marketplace of applications (both business and consumer) hits the market, we believe VR/AR has the potential to spawn a multi-billion dollar industry, and possibly be as game changing as the advent of the PC.”

While the conversation around VR (virtual reality) and AR (augmented reality) often focuses on gaming and video entertainment, the Goldman report theorizes that these use cases will account for less than half of the software market. 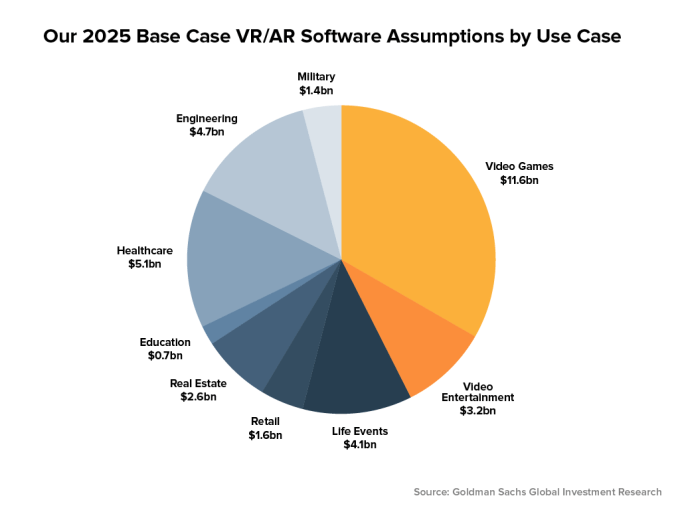 As a sometimes-gamer, it’s fun to think about strapping on a headset and diving headfirst into my favorite virtual worlds. But to limit our imagination to these applications is ignoring the unlimited potential of a hybrid reality created by augmented and virtual technology to affect every business and industry.

By combining analog, two-dimensional ways of working with new mixed–reality experiences, we can transform our ability to communicate, collaborate and create. The challenge for businesses will not be to provide a more immersive experience, but a more valuable experience.

The continued disruption of communication modalities

Message carriers were put out of work by the telegraph, the telephone was disrupted by the Internet and the good old-fashioned conference call was replaced by VoIP video conferences and screen-share-enabled unified communications systems.

Before the Internet, the historical evolution of long-distance communication technology was always toward replicating human connection in its clearest form: a face-to-face conversation. The telegraph may have missed the human voice, but its relative speed was a step toward an immediate verbal response.

Ironically enough, the first words spoken across a telephone line in 1876 by Alexander Graham Bell to his assistant Thomas A. Watson were, “Mr. Watson, come here — I want to see you.”

Mixed reality has the potential to allow a global workforce of remote teams to work together and tackle an organization’s business challenges.

Most digital communication across the Internet lacks the verbal, facial and body language cues of a face-to-face conversation, but the reach of our messages and the media at our disposal (photos, videos, memes, gifs, articles, etc.) has made it a medium of undeniable allure and value.

Why would I call a friend on the phone and tell them about a great concert when I can post a status and let all my friends know at once, all while showing them a video of me belting out my favorite song with the performer?

That being said, to say there is sometimes communication breakdown across the Internet is an understatement that requires no further explanation for anyone that has ever read a Comments section.

Don’t get me wrong, a connected world is undoubtedly a better world. I defer to the mission statement of the Mark Zuckerberg-led Internet.org for a perfect summation:

“The internet is essential to growing the knowledge we have and sharing it with each other. And for many of us, it’s a huge part of our everyday lives. But most of the world does not have access to the internet. Internet.org is a Facebook-led initiative with the goal of bringing internet access and the benefits of connectivity to the two-thirds of the world that doesn‘t have them. Imagine the difference an accurate weather report could make for a farmer planting crops, or the power of an encyclopedia for a child without textbooks. Now, imagine what they could contribute when the world can hear their voices. The more we connect, the better it gets.”

But the more we connect, the more important it is that we connect better.

Virtual, augmented and mixed experiences that exist at the intersection of our physical and digital worlds will bring the humanity of the face-to-face conversation back into the evolution of our communication.

Don’t make the mistake of equating these virtual experiences solely with sci-fi and gaming applications in which you have a surrogate and exist in a different, alternative reality system.

I’m not talking about plugging into the Matrix as a means for improved communication. I’m talking about the ability for two people across the world to put on a headset and share any experience they choose — whether it’s to sit next to each other and physically flip through a photo album or to visit their dream destination.

What does this mean for the future of the workplace?

For one, it means improved collaboration. Mixed reality has the potential to allow a global workforce of remote teams to work together and tackle an organization’s business challenges. No matter where they are physically located, an employee can strap on their headset and noise-canceling headphones and enter a collaborative, immersive virtual environment.

It also means a more flexible workforce. While many employers still use inflexible models of fixed working time and location, there is evidence that employees are more productive if they have greater autonomy over where, when and how they work. Some employees prefer loud workspaces, others need silence. Some work best in the morning, others at night.

Employees also benefit from autonomy in how they work because everyone processes information differently. The classic VAK model for learning styles differentiates Visual, Auditory and Kinesthetic learners.

Visual learners will appreciate the immersion and optic stimuli of mixed reality. If nothing else, auditory learners will benefit from the reduction in auditory distractions that plague the modern open office space. Kinesthetic learners that learn best by moving, touching and doing will benefit from being able to explore and collaborate in mixed reality. Conference calls that cause kinesthetics to tune out can be replaced by interactive, tactile modes of work-like whiteboarding sessions. 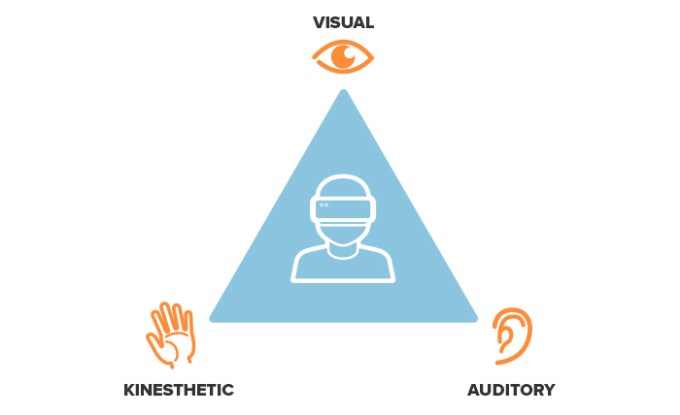 This greater autonomy in where, when and how employees work will serve to maximize productivity by empowering them to complete tasks in the manner that is best for them. It will allow employees to enter and work in “flow” states of complete absorption.

Named by renowned psychologist Mihaly Csikszentmihalyi, flow refers to “the mental state of operation in which a person performing an activity is fully immersed in a feeling of energized focus, full involvement, and enjoyment in the process of the activity.”

Video gamers should immediately recognize this mental state, as game design is particularly adept at inducing flow states where hours and hours fly by and the player is completely enveloped in the game.

Csikszentmihalyi theorizes that in order to retain flow and “stay in the zone,” the activity must reach a balance between the activity’s challenges and the participant’s abilities. If the challenge is too great, it promotes anxiety — too easy, and it promotes boredom. 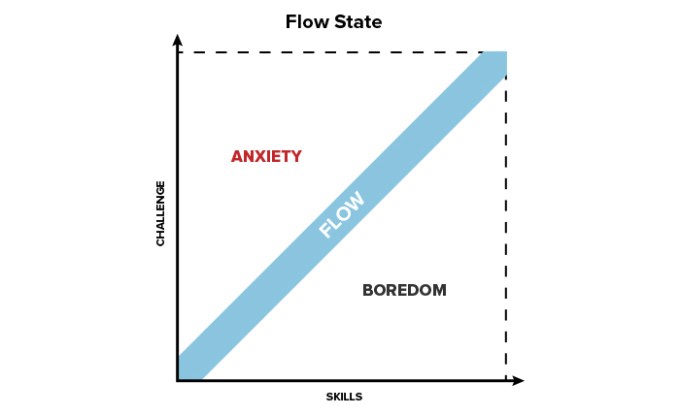 The seesaw between anxiety and boredom is far too familiar to the modern workforce. Without fail, we try to get heads down on a project, and the emails, slack messages and “do you have a minute?” desk drive-bys keep us from ever being able to focus. Anxiety rears it ugly head.

We finally get the project done and while we are waiting for feedback from the client or organizational leadership, the communication channels miraculously quiet down. This is where boredom comes in.

Mixed reality is conducive to inducing flow states because of its ability to immerse employees in designed experiences that match their learning styles, preferences for stimuli and ability. But perhaps more importantly, it can serve to limit the distractions that cause anxiety and the latency that leads to boredom.

The challenge for businesses will not be to provide a more immersive experience, but a more valuable experience.

Distractions are eliminated by the worlds we are able to design that only push the messages imperative to the work we are doing.

Latency, or the time between an action and its response, is eliminated when our work is memorialized digitally as we complete it. A client or supervisor is able to join our work process digitally at any time to track and review progress.

Last, but certainly not least, mixed reality creates solutions for the universal problem of finite resources.

Aside from eliminating the monetary travel cost and the opportunity cost of time spent on red-eye flights and in jet-lagged meetings that plague global business, mixed reality reduces an even more sparse resource — real estate.

On a macro level, population is increasing and space is not. Reducing the need for large offices by creating virtual workspaces will make the office park a relic.

On a micro level, just think about your own office. There are never enough conference rooms, and never enough workspaces. That awesome whiteboard you just covered with great ideas? Your colleague is coming in 30 seconds after you finish for a client call and needs it erased.

Mixed reality workspaces that memorialize our work while we complete it will not require furious note taking and cell phone picture snapping in those 30 seconds.

In fact, those 30 seconds will not exist, because whether we are sitting at our desk, in our home or in Starbucks, accessing a perfectly designed virtual workspace is as simple as putting on your headset.

The future of communication and collaboration at work will be defined by virtual, augmented and mixed reality experiences that provide economic value. To equate this collision of our physical and digital worlds solely with play and entertainment is to miss one of the great upcoming technological evolutions of our workforce.