Backing comes from Idinvest Partners, and previous investor Sunstone Capital. The newly-raised capital will be used to further market the service in Europe and the U.S., in addition to product development out of Peakon’s HQ in Copenhagen, and expanding sales and operations in London.

Peakon offers what it calls a simple data-driven solution to “understanding, engaging, and retaining staff” through automated surveys and specifically tailored insights and analysis of what drives and motivates teams. One way might be to think of it as “people analytics” for the HR department and managers.

More frequent employee surveys, rather than, say, the traditional annual review, are increasingly becoming a tool used by more forward-thinking and data-driven companies, such as the Googles, Amazons, and Facebooks of the world. Peakon wants to make that a reality for more companies, targeting those with 100 employees or more, citing existing clients such as Delivery Hero, Urban Airship, and Opera. 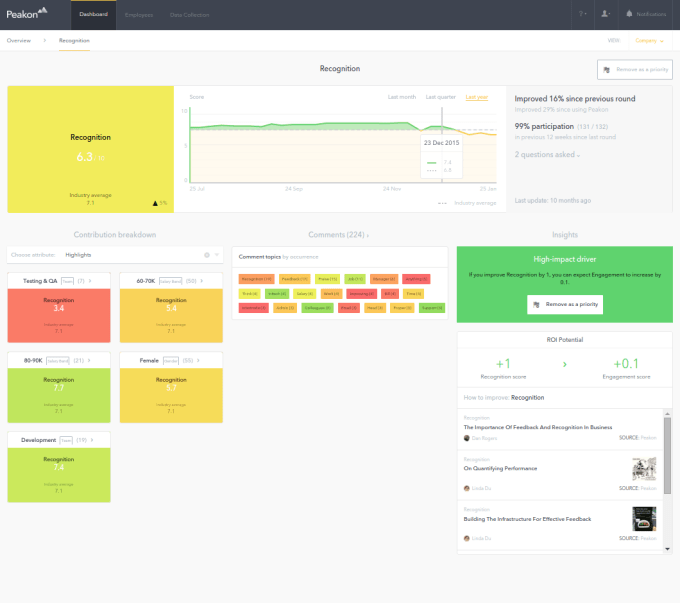 “We want to bring the same level of analytics, sophistication, and scientific rigour to managing people as is currently applied to managing finance and customers,” Peakon co-founder Dan Rogers, who was most recently VP Growth at Songkick, tells me.

By taking a more data-driven approach — Peakon helps with both the collection of employee engagement data and, most importantly, the resulting analysis — Rogers says that other levers beyond simply offering greater remuneration can be used to make for more motivated and therefore productive employees.

“If companies knew what their employees really wanted, not only would they be saving money, they’d also have more motivated staff, and they’d have a better long term future to boot,” he says.

Furthermore, that’s something that Google, Facebook, and Airbnb are already doing internally by combining data-science with organisational behaviour and psychology. “We are building a platform to make this kind of analysis available to everyone,” adds Rogers.