Last week, NASA was awarded a patent for a new type of squishy, amorphous robot that could one day slither and roll around other planets. Amorphous robots can passively change their shape and because of their enclosed nature they’re less susceptible to damage from small particles. These unique abilities make them particularly useful in dusty and sandy environments. 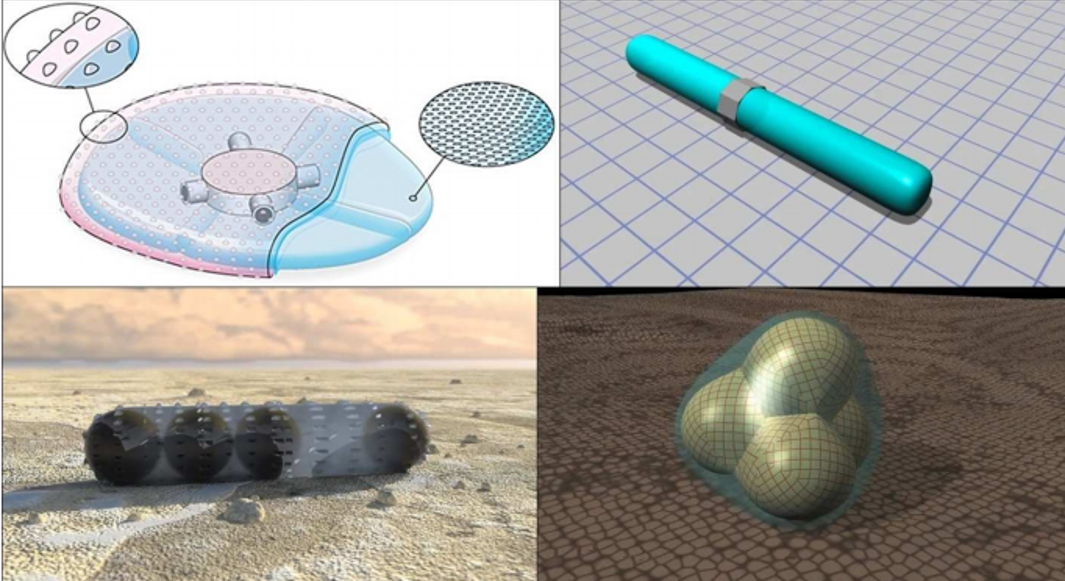 Dust and sand are often dangerous enemies to electronics. Even robotic wheels can get jammed or stuck when trying to move across sandy or rocky surfaces. In 2009, for example, NASA’s Mars Spirit Rover got stuck in a patch of Martian sand and NASA was never able to free it.

In contrast to some of the rovers and robots we may be more familiar with, these amorphous robots wouldn’t have any external moving parts or a rigid shape. Instead, they would generate movement using any of three methods:

(1) Circulating fluid within the structure

(2) Switching the polarity of enclosed electromagnets

(3) Inflating or deflating part of the structure

The technology was funded back in 2010 by the Innovative Partnerships Program and worked on at NASA’s Langley Research Center in Virginia. The principle investigator was NASA engineer, Dr. Arthur Bradley, who worked on four different amorphous robotic designs with a few of his engineering students. You can watch these unique designs in action in the video below.

NASA’s patent notes that the amorphous robots are designed to move along a solid surface without the use of conventional wheels, tracks, or legs. Because of this, Dr. Bradley told TechCrunch that in additional to interplanetary missions, he believes these designs also have the applicability to search and rescue mission here on Earth.

Designing rescue robots, or “rubblebots” as Dr. Bradley refers to them, is no easy challenge. In fact, this year DARPA hosted an international robotics challenge that tasked participants with designing a robot for disaster-response operations.

Disaster areas, such as cities affected by earthquakes or explosions, are often too dangerous or simply too difficult for humans to navigate by their own means. It’s often safer or more practical to send in a robot to assess a situation. In the DARPA Robotics Challenge, robots needed to navigate over an eight-task disaster zone course. The winners took home over $3 million in prizes. None of the robotics submissions, however, were amorphous.

Dr. Bradley and his students took a different approach to their robotic design that would be well-suited for both Earth-based disaster applications and more-extreme environments on the moon or Mars.

In order for an amorphous robotic technology to be pursued, now that NASA has received a patent for this technology, the principle investigator (Dr. Bradley) would need to write a proposal for a NASA program to fund the research.  Alternatively, NASA would also accept proposals from outside entities, private or public, to request to license the technology for their own purposes. So, if anyone is interested in developing a squishy, amorphous robot, NASA has a patent you might be interested in using.