Xfers, a startup that wants to simplify bank transfers, announced today that it has raised a $2.5 million seed round. Based in Singapore, Xfers plans to use the funding to expand into Indonesia during the first quarter of this year before tackling other markets in Southeast Asia. The Y Combinator alum will also continue building its technology platform, which can be integrated with many banking networks and payment gateways.

Though bank transfers seem quaint and inconvenient to many U.S. consumers, it is a common form of online payment in many Southeast Asian countries with low credit card penetration. E-commerce sellers send account information to buyers, who then use their banks’ websites or ATMs to transfer funds. Since financial institutions often don’t notify sellers of new deposits, buyers have to tell them what time the transfer was made so they can confirm that the cash has arrived.

Co-founders Tianwei Liu and Victor Liew are both from Singapore, but came up with the idea for Xfers while working in the Bay Area at Amazon and Quora, respectively. During his stint in Silicon Valley, lots of Liu’s friends asked him to purchase things for them. PayPal charges a fee and many consumers in Southeast Asia don’t use it, so Liu told people to transfer money into his bank account.

“Once eight guys tried to transfer money to my account, but I had two payments missing. Since everyone paid the same amount I didn’t know who transferred what and it took two weeks to figure out who hadn’t paid,” says Liu. 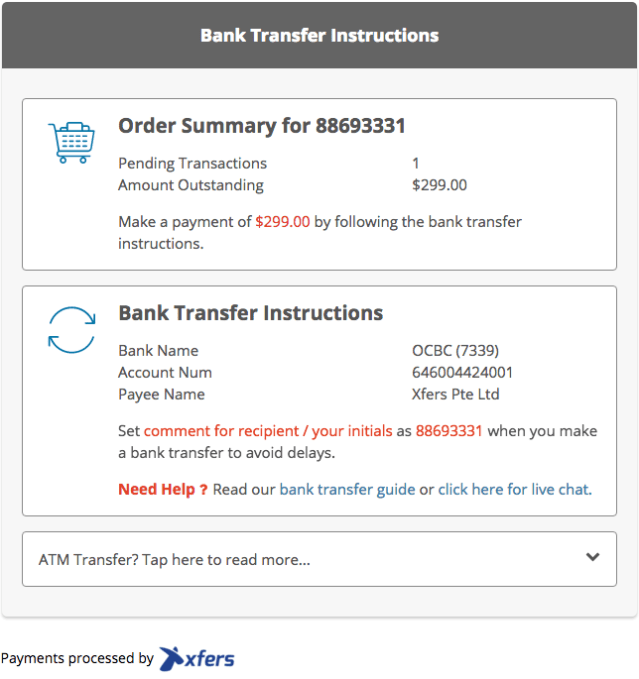 Xfers co-founders say they didn’t plan to launch a startup. The two originally built a prototype and open API and set it aside while working at their full-time jobs. The API began to gain traction, however, and after several companies asked to integrate it, Liu and Liew decided to focus on Xfers and applied to Y Combinator’s summer 2015 class.

Since the API first became available in October 2014, it has processed SGD $5.5 million (about $3.8 million). The payment link now also reconciles inventory so buyers who list the same items on multiple platforms don’t accidentally oversell and provides escrow services, verifying accounts to protect buyers and prevent fraud, which is a huge risk with bank transfers.

Xfers currently has two types of target users. The first are enterprise users who rely on bank transfers for payments, including remittance and crowdfunding companies. The second are peer-to-peer sellers in Southeast Asian countries like Indonesia, where 80 percent of e-commerce transactions are still arranged through social media platforms like Facebook and Instagram or web forums, though mobile marketplaces like Carousell or Duriana are also gaining traction.

Xfers’ one-click payment link, which uses technology built on top of existing commercial banking infrastructures, is designed for merchants who don’t want to deal with APIs. Instead, they enter an item’s price and their bank account information into Xfers’ site, which automatically generates a link. A notification is sent when the payment is completed. The company’s services are free for peer-to-peer users and it monetizes by charging enterprise clients a flat fee.

After Indonesia, Xfers is eyeing expansion into Malaysia, Hong Kong, and Thailand. It will have to compete with payment startups like Bangkok-based Omise as well as Braintree and Stripe. Liu says Xfers will differentiate by focusing on facilitating online bank transfers instead of credit card payments.